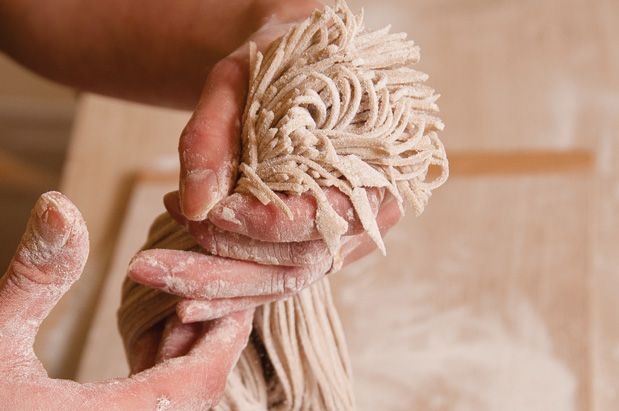 There are no shortcuts at Mutsuko Soma’s Fremont soba studio. Here, in a tiny, sunny room, she makes the Japanese teuchi soba the way she learned at soba school in Japan, which she attended in 2008, after working at Seattle restaurants such as The Harvest Vine and Saito’s.

First, she grinds her own Washington-grown buckwheat with a stone mill, then she sifts it and, using her fingertips, mixes it with water (and a bit of wheat flour). After kneading it, she rolls the supple dough entirely by hand (1) and, then, using an imposing plough-shaped knife (2), cuts it into noodles as thin as blades of grass (3).

Until recently, Seattleites have only been able to savor the bouncy perfection of Soma’s noodles through a couple of wholesale accounts, such as Southcenter’s popular Miyabi restaurant, which she co-owns, and a series of pop-up dinners, but last month (if all went according to plan), she opened her own Japanese “gastropub,” Miyabi 45th, on Wallingford’s main drag. Though Miyabi 45th is a northern sibling to Miyabi, its menu is Soma’s own—and naturally she focuses on soba in all its variety: served cold with dipping sauces or hot with, say, duck and leeks. Also on the menu are Japanese tapas along the lines of braised pork belly, dashimaki (an omelet with savory dashi sauce) or a playful soba take on fried agedashi tofu. ($9.50–$30)