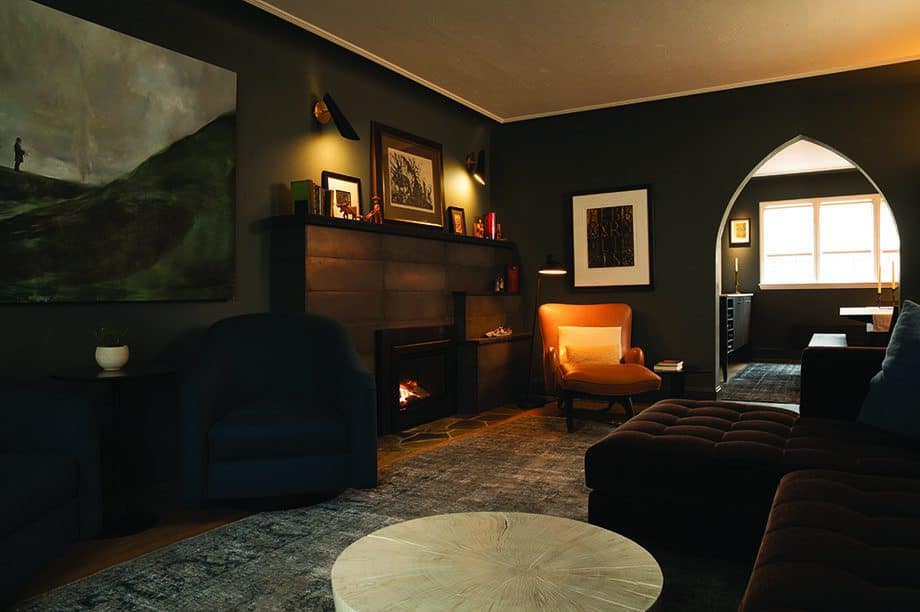 Imagine owning enough books to fill Portland’s famous Powell’s Books and having to boil down your collection to a single 12-foot shelf. That was just one of many personal and technical challenges facing Carol Grossmeyer in her long quest to find a forever home.

Grossmeyer and her husband grew Milwaukee-based Harry W. Schwartz Bookshops, founded in 1927, into a beloved safe house for beatniks and bookworms. It became one of the Midwest’s largest independently owned bookstore chains.

Her husband, raconteur anticapitalist David Schwartz, who was not a smoker, unexpectedly died of lung cancer in 2004, the same year he won the “Publishers Weekly” Bookseller of the Year award.

That left Grossmeyer standing on the whale of a submerging industry. The Great Recession of 2008-09 closed the book on Harry W. Schwartz. It was with a heavy heart in 2010 that she loaded her oxcart and headed west. 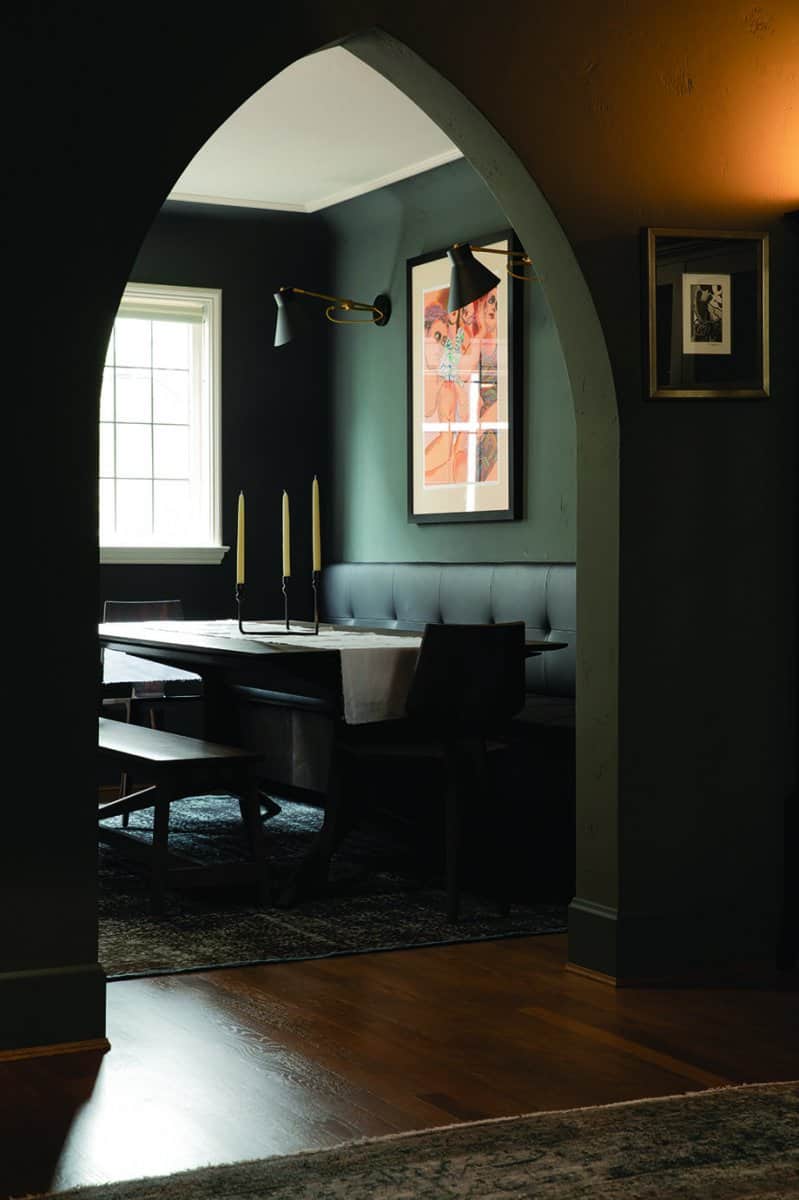 She knew only two people in Seattle: her son and an old family friend, who tried to set Grossmeyer up with a gentleman who lived in an enchanting Queen Anne teacup. The romance never developed, but Grossmeyer made an important connection.

“Although it was a very small one-room condo, it worked, because everything was perfectly organized down to the last, minute detail and it was beautiful,” she recalls. “I asked him, ‘Who is your architect?’”

It was Theresa Freeman of SHKS Architects of Seattle. Her advanced organizational skills would soon be put to good use.

The first home Grossmeyer looked at was a small condo in a coveted Frederick Anhalt building on East Roy Street in the Capitol Hill neighborhood. It had plaster walls and ceilings, charming arts and crafts details, and Spanish mission, Tudor and Moorish influences. The real-estate agent sternly warned her to act immediately if she liked the apartment, thereby torquing Grossmeyer’s anxiety level to DEFCON 1.

“It was a brick building with arches and wood floors,” Grossmeyer says. “I walked in and I almost cried because it was just like the home I had left in Wisconsin.”

She loved the cozy nest Freeman had designed, but longed to unfurl her wings. It was several years before a larger apartment became available in the building. Grossmeyer welcomed the chance to work with Freeman again and to get her mind off the pandemic. 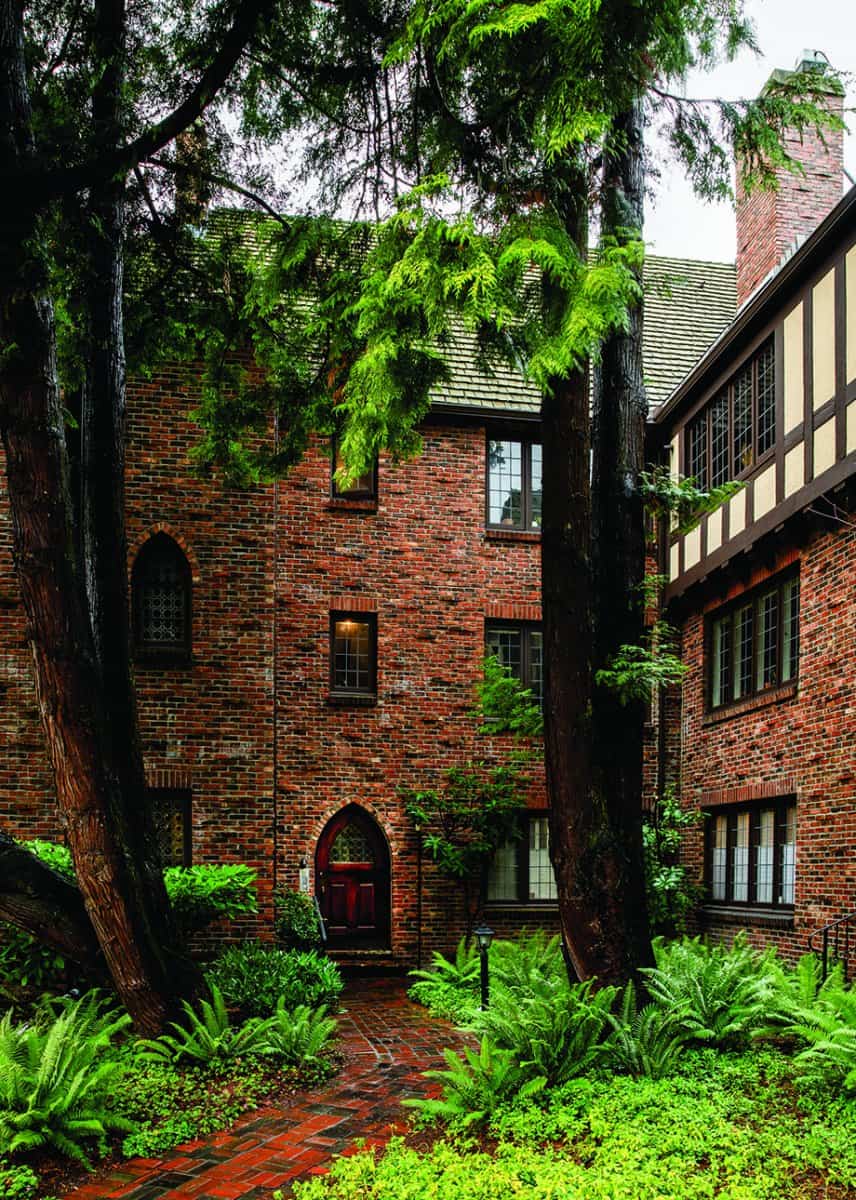 The first order of business was correcting a structural emergency created when the previous homeowner cut an opening between the dining room and the kitchen. Great concept on paper, but it destroyed a main bearing wall in the process, a mistake repeated in triplicate because all the units in the four-level building have similar floor plans.

“They basically broke the wall,” Grossmeyer says. “It was a mess.”

“It was not like we could just walk into other people’s (spaces) and fix the problem,” Freeman adds.

Their trusted contractor, John Brown, whom they greatly appreciated for not mansplaining everything, expertly repaired the damage.

Unfortunately, the new wall allowed for only a tiny window slit, or “playful peek,” Freeman says. “We had hoped to have a more open relationship between the kitchen and dining room, so we went for a little drama since the areas were so small.”

Kitchen walls were clad in lightly veined white marble, with the exception of one done in black luminescent tile. Other touches of mink in the galley include a copper sink, generous use of unlacquered brass faucets and fixtures, a tiled range hood and brass stove bezels.

Grossmeyer wanted comfortable seating for up to eight people in the modest dining area, so Freeman carefully scaled new cabinets (built by Wilmington North) and designed a French bistro-style banquet seat to run along one wall.

The next four-alarm fire was aesthetic.

“Somebody had just put white tile on everything, with abandon, and not a pretty white. It was a very vanilla, chalky, stark white,” Freeman says. A creamier option was deployed on outside walls to capture light, while grays and blues dominate a warmer, moodier, more romantic interior – dark, but not disturbed. 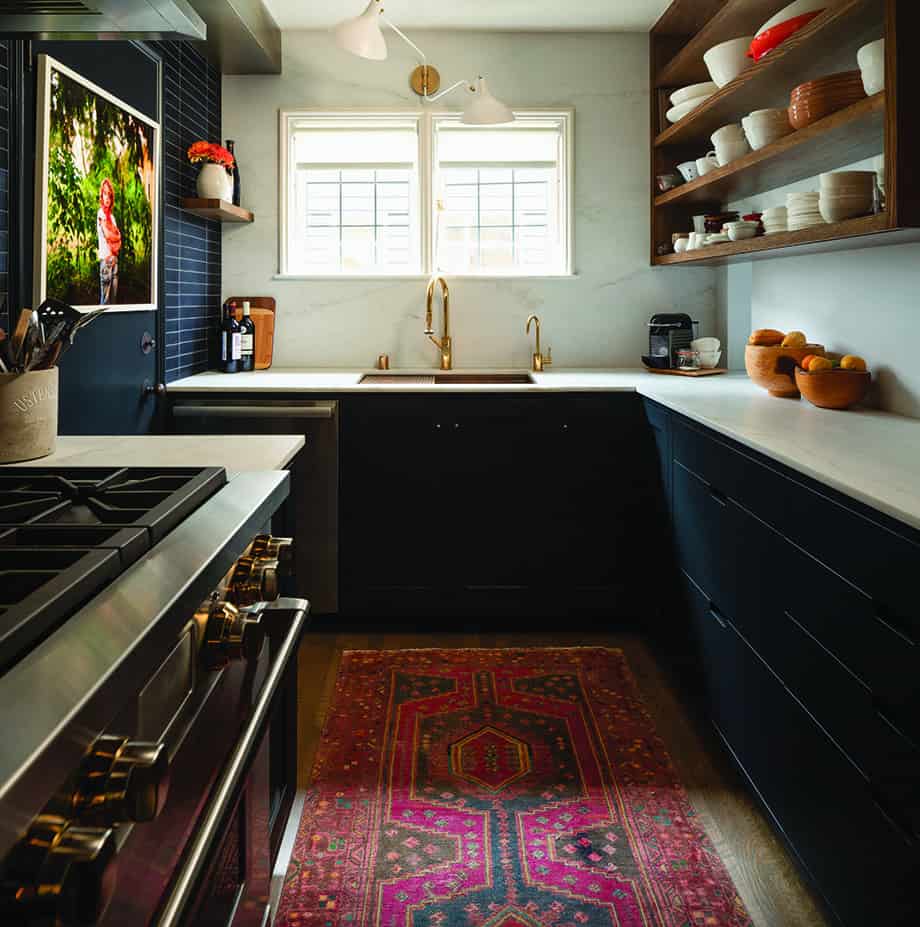 Plaster walls and ceilings have significant acoustical advantages, but are tricky to repair and complicate lighting and other installations. Renaissance Plastering performed many miracle repairs and refurbishments, including rare plaster coves and picture rails.

“I found Renaissance wandering around Capitol Hill. I saw an interesting project, and poked my head in,” Freeman recalls. “We wanted to maintain the feeling of hand craftsmanship throughout the unit. We were happy to work with what was there, adapting, repairing and extending the life of materials. It was definitely a labor of love by a lot of subs. You wouldn’t believe how many contractors in Capitol Hill are throwing away wood floors, doors and a lot of other great materials. They say, ‘It’s easier to hang a new door.’”

One of the unit’s interior doors was missing its custom copper doorknob, so a craftsman had to be hunted down to create a replacement, which turned out pleasingly flawed.

An unremarkable wood fireplace squatted sullenly in a corner of the living room, tethered to the building’s communal exhaust piping. Natural gas was the best heating system for Grossmeyer, but the insert conversion did nothing to improve the fireplace’s curb appeal.

The solution was an artisanal, custom step-piece tile surround, “for the imperfectness of it,” Freeman says. “It’s a place to sit in a chaise, read a book and have a cup of tea.”

The door handle to the powder room was situated very high, perhaps to subvert and/or annoy little people. Again, they embraced the oddity. “It’s just part of the story,” says Freeman, who won her first AIA Home of Distinction award in 2017 for another remodel.

An opaque panel was embedded in the bathroom door to spread natural light. Previous owners had installed a “goofy” stained glass window in the powder room, probably a violation of the building covenant, Freeman says. A true divided-pane window with leaded joints was fabricated.

The living room begged for an oddly-sized, gray, very low nap Turkish-style rug. Freeman and Grossmeyer were lectured by various rug merchants on “The Importance of Bowing to Industry Size Standards” before meeting with Sarah Nadolny, showroom manager for Driscoll Robbins Fine Rugs.

The pair made many weekly trips to survey Driscoll’s entire inventory. The eternally sunny Nadolny conducted a worldwide grid search and eventually located a promising carpet in Afghanistan. She offered to import it.

“There were a lot of choices to make in this whole thing, ”Grossmeyer says. “If it weren’t for people like Sarah and Theresa, I think I might have driven myself crazy.”

As a finishing touch to the remodel, Grossmeyer coveted a small original art collection from a single artist. The weighty decision haunted her dreams. She in turn haunted Seattle art galleries.

Sarah McRae Morton’s paintings were the answer. The centerpiece is inspired by Mozart’s last requiem and features a man with a book and musicians performing on a golden whale.

It brings the “Titanic” to mind. Also, “Moby Dick,” a favorite of Grossmeyer’s.

“We are all standing on the whale,” she concludes, cheerfully enough. “I like that he’s looking at my books.”

This family home was selected by a panel of architects for the AIA Seattle Home of Distinction program due to its creatively changing the experience and views of this home toward a comprehensive design, all within the existing footprint. Dreaming about a home design project and not sure where to start? AIA architects can help. aiaseattle.org/askanarchitect