Has the FDA’s Crackdown on Local Farms Gone Too Far?

Rebekah Denn looks at the debate over what “safe” means when it comes to artisan products. 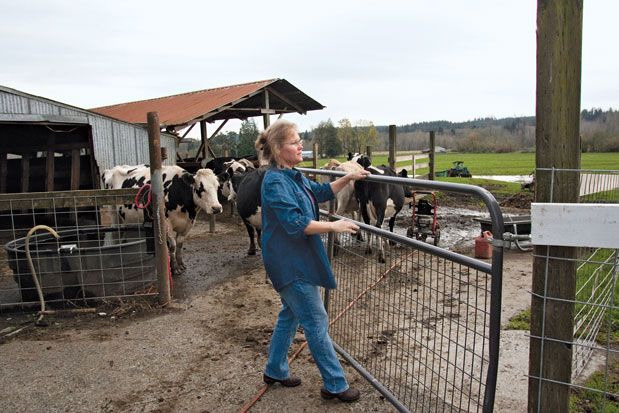 Contamination-related shutdowns at two beloved local cheese makers sparked outrage last year—but maybe not for the reasons you’d think. The most vocal protests weren’t about the reports of contamination—listeria at the Estrella Family Creamery and E. coli at Sally Jackson Cheeses—but about what some see as a draconian federal crackdown on small, local businesses.

“Contact everyone you know. Let’s help them beat this!” one commenter wrote in support of the Estrella family on the Seattle Local Food blog after the Food and Drug Administration (FDA) shut down the business. Food blogger Naomi Bishop, “the Gastrognome,” wrote that “Washington has already lost too many great cheeses to ridiculous regulations.” More than 450 fans contributed more than $23,000 to Estrella’s legal expenses through an online support page.

No one argues that small, local producers should be allowed to make people sick. (No illnesses, in fact, had been connected with the Estrella listeria, though eight people were sickened in the E. coli outbreak linked to Sally Jackson.) But there’s a boiling debate over what “safe” means when it comes to artisan products, and whether they should be subject to different rules.

The cheese-safety problem has been building for some time. The Estrella Family Creamery in Montesano had struggled with listeria for months, earlier recalling some of its soft cheeses, but then balking at FDA requests to recall its hard cheeses, which the company says were not affected. Oroville’s Sally Jackson had been written up for code violations by the state Department of Agriculture before the FDA-mandated recall; shortly thereafter, it voluntarily shut its doors

Details from the two cheese recalls give some pause, such as the cheese aging on rough wood “with a buildup of product residue” at Estrella, and the wearing of manure-soiled clothing while making cheese at Sally Jackson.

For both sides, the stakes are high: For particularly vulnerable consumer groups (the very young, the very old and the immunosuppressed), listeria and E. coli can cause serious illness, miscarriages and even death. For tiny artisanal cheese makers, losing this battle can mean financial ruin.

Kelli Estrella at first fought the shutdown, but now says the family is finished with the cheese business that brought them national acclaim and top cheese-making awards. The farm is switching to vegetable CSAs—“community-supported agriculture”—and meat, and perhaps also offering cheese-making lessons and other hands-on activities at the farm. Estrella says the FDA’s actions were a scary combination of power and a lack of understanding; that inspectors weren’t trained to handle a setup like hers.

“They think you can’t sanitize rough-cut wood,” she says. “And so I tell them, ‘Well, this wood has already been approved by the Washington State Department of Agriculture; it’s an industry standard.’” Estrella’s voice shakes as she talks about some of the other descriptions in the FDA’s affidavits, which she says are untrue. Regardless, she says, the government’s demands and the promise of a lengthy, expensive legal battle have forced her to move on.

“I’ve been grieving,” Estrella says. “I really hope that our situation will cause a lot of people to ask questions and say, ‘Wait a minute. Is something wrong here?’”

Don’t expect the debate to end with Estrella and Sally Jackson. Some producers are going to be hit soon by recently approved, tougher federal food safety standards. Smaller artisans will be exempt from these new rules—but if they use raw milk in their cheeses, as Sally Jackson and Estrella did, they’ll still face serious scrutiny and stiffer requirements.

These moves go too far for people like Ron Zimmerman, co-owner of The Herbfarm, the renowned Woodinville restaurant that itself was a pioneer in the local artisan food movement. Zimmerman’s restaurant serves grand, gorgeous dinners made with ingredients from small producers—meals that run nine courses and cost three figures. He served Sally Jackson cheeses for 25 years, and is already missing the “Red Darla” cheese he used to buy from the Estrella family.

“I’m not even sure I should call it a product. It’s an extension between humans and the land.”

Cheeses are hardly a major culprit in the spread of food-borne disease, Zimmerman adds, noting that they account for the tiniest fraction of reported illness. “My math shows that this is about 1/5000 of a percent. Not exactly a danger of epidemic proportions, if you ask me,” Zimmerman says, especially when compared with recent peanut, spinach and ground-beef recalls, which caused far more illnesses and even deaths.

That’s not to say that there can’t be problems with cheese, Zimmerman says, but “I think the FDA is vastly overreaching in the name of ‘science’ and ‘safety.’”
And Zimmerman wonders: Once such industrialized standards take hold, where will they stop? What about the farmer who uses manure on his organic carrots; should that also be banned? “It’s not a stretch of the imagination to see all kinds of stuff like that happening,” Zimmerman says.

But to Cynthia Wilson, who teaches students about sanitation at Seattle Culinary Academy, it doesn’t come down to art vs. industry. Nothing about the artisan process is inherently unsafe by modern standards; she thinks the scenes described in recent affidavits would have alarmed even an old-fashioned farm wife. “My great-grandmother would have been ashamed,” Wilson says.

Safe doesn’t have to mean impersonal, says Wilson. “It doesn’t have to be industrial. You have to wash your hands and you need to keep the cow poop out [of the kitchen].

“We’ve gotten in a position [where] the people who do the regulatory work and the public health work are viewed as being antagonistic and opposing the food producers and the food servers .…The FDA gets blamed for not doing enough and they get blamed for being too lenient or too stringent,” adds Wilson. “It depends on who you’re talking to. And we all kind of lose sight of the point. It’s about public health and public safety.”

Sally Jackson told the Associated Press (AP) that she was brokenhearted at sickening anyone, which had never happened before in her 30 years in business. She told the AP that while she disputed some of the FDA report, she was shutting down because she couldn’t afford the facility upgrades state regulators were requiring her to make.

Not all producers consider tougher requirements a problem. Kurt Dammeier, owner of Beecher’s Handmade Cheese, has been the state’s evangelist for artisan producers, making his own prizewinning cheese and championing smaller cheese makers through his well-curated counter at his Pike Place Market store. Dammeier is unfazed by new federal rules, such as regular testing by accredited laboratories and written food-safety plans. “We’re already well above all the standards of testing, that I’m aware of anyway,” he says. “And, frankly, there aren’t very many cheese makers who should be worried about it. The testing is something people should be doing anyway.”

Estrella, Dammeier says, “is like an artist dealing with [cheese making], taking what she gets and making it kind of on the fly. And there’s a lot of romance to that, and she makes great cheese with it, but you can’t prove to the FDA inspectors that your cheese is safe if you don’t document things.

“I’m really not against the idea that everyone has to be able to prove their process, and I think it’s better for the cheese business as a whole.”

At the Picnic shop on Phinney Ridge, owners Jenny and Anson Klock see the debate from more than one side. The cases in their shop, a food lover’s paradise, are stocked with artisan cheese and charcuterie, with shelves lined with local jams, honey and chocolates. But the pair also makes their own creamy pork rillettes and other gourmet prepared foods. “We follow standard protocol, not totally of our design, but one that adheres to the state’s health code,” Jenny Klock, a graduate of Seattle Culinary Academy, said in an email. Many of the products they carry are produced by friends and colleagues, but the Klocks stand behind their safety. Following the rules is paramount.

The Klocks heard about the first, voluntary Estrella recall through news reports, but were never notified by the creamery. “[T]hough we loved the cheese, we were disheartened by the breakdown in communication and chose not to reorder at that time,” says Jenny Klock.

Where is the safety issue headed?

Bill Marler, one of the nation’s leading food safety lawyers, says we probably have as many laws now as we need; enforcing them is the issue. He considers both the Estrella and Sally Jackson recalls “classic public health”; to him, the anti-government backlash came as a surprise. The producers were being held to a standard the public expects, he says, “whether it is a small cheese manufacturer or a giant multinational.”

While those standards shake out, is it safe to eat artisan cheese? Well, is it safe to eat anything? Recent months have also brought recalls of Skippy peanut butter for salmonella contamination, Lean Cuisine spaghetti and meatballs for containing pieces of plastic, and 7 tons of beef shipped to 10 states, including Washington, for E. coli. There were numerous cracker recalls, too. We might worry about them as much as the cheese.