Meditation may help you feel less stressed, but studies show it also helps with pain 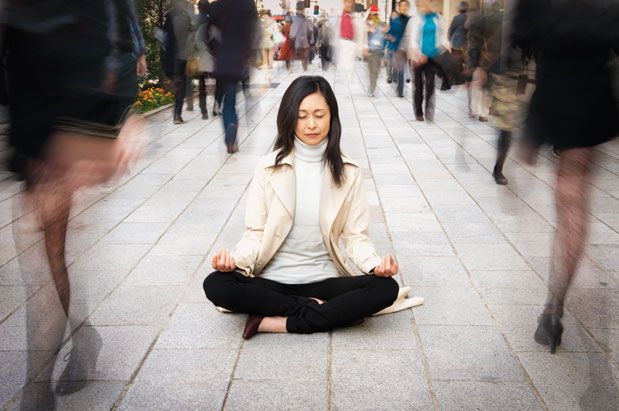 On Wednesdays, the mood of the midday crowd at Seattle’s Frye Art Museum on First Hill is contemplative. Many people aren’t there to peruse the most recent art exhibit—currently, of works by Danish Symbolist painter Vilhelm Hammershøi. They won’t see a film, or take in a lecture. Instead, they’ll spend half an hour in a darkened auditorium, where they won’t see much of anything.

Pairing meditation and art feels natural. Reflecting on an absorbing piece of art can feel meditative, with the ancient practice’s effect of quieting the mind. But recent research shows that mindfulness meditation is as much science as art, and that it packs powerful therapeutic benefits. A new study from Seattle-based Group Health Research Institute shows that mindfulness-based stress reduction (MBSR), a form of meditation training, can relieve chronic back pain, and that its effects last. Research participants who learned the MBSR techniques had lower levels of back pain a year later.

Meditation’s soothing effect on pain is part of the Frye program’s origin story. The popular weekly program was born in 2010, when museum staff envisioned a meditative gathering to complement an exhibition of works by Albert von Keller, an artist known for mystical subject matter. The Frye contacted Swedish Medical Center to tap into its existing knowledge about meditation. There, physical therapists had already developed an eight-week, intensive MBSR program focused on helping patients with chronic pain and other stress-related health ailments. Together, the organizations sponsored the museum’s weekly series.

The program proved so popular that it made sense to continue it as a community service after the art exhibit ended, says Carolyn McManus, who, together with Diane Hetrick, leads the Frye program. Both are physical therapists with Swedish Medical Center’s outpatient physical rehabilitation department. Today, the weekly sessions draw 75–100 participants, many of them regulars.

Although meditation has roots in Buddhism, the mindfulness meditation practiced in MBSR—which combines elements such as yoga, reflective journaling exercises and talk therapy with meditation—is secular. The museum’s free, drop-in sessions are simpler and shorter than the Swedish MBSR program, consisting of guided meditation without stretching or speaking. “The program is an example of an arts engagement program that uses creative strategies to promote healing, make a positive difference in people’s lives and add value to the community,” says Frye spokesperson Jill Rullkoetter. Participants can expect to feel calm and refreshed, as they would after a 30-minute power nap (without the telltale facial creases or drool).

Happily, though, even the shorter practice can be beneficial, says McManus. Just 10–30 minutes of daily meditation can effectively reroute negative thought patterns that escalate stress and pain, she says, training the brain to allow pain to pass without registering as negative. “The key is consistency and daily practice.”

Her advice is also backed by science: McManus taught meditation to participants as part of a study that was published in The Journal of Neuroscience in 2011. Results showed that four consecutive days of daily 20-minute meditation sessions reduced pain-related distress by 57 percent.

Results like these don’t surprise Daniel Cherkin, Ph.D., who led the Group Health study. Over the past decade, a number of studies have demonstrated that meditation provides pain relief, primarily by altering the way the mind perceives and responds to pain, he says.

When it comes to pain relief, the type of meditation does matter: Other studies, unrelated to the Group Health research, show that “open monitoring” meditation, which promotes observing thoughts and letting them pass without judgement, is more effective for pain than “focused attention” meditation, in which attention is honed on a something distinct, like one’s breathing or a flickering flame. Many meditation courses include a mix of the two.

“Pain is interpreted by the mind, which is an integral part of the human body,” says Cherkin. When treating chronic pain, he says, “to separate out the mind and the body is counterproductive.” His research study considered back pain, but the MBSR course that his study participants took part in was intended to lower stress in general, not to specifically address back pain. Learning MBSR fosters stress-reducing skills with broad applications, he says. “These skills can be helpful for dealing with all of life’s stressors.”

Of course, not everyone has the time or resources to attend a weekly meditation class—or even to escape their desk at lunchtime. It probably comes as no surprise that there are smartphone apps to help with that dilemma. Meditation apps can be useful, especially for meditation newbies, says McManus. Top apps, per a 2015 Australian study that ranked these for functionality, information quality and engagement, include Headspace (free; iPhone/Android/Amazon), Smiling Mind (free; iPhone/Android), iMindfulness ($2; iPhone/Android) and Mindfulness Daily ($2; iPhone).

While solo meditation—with or without an app—can be helpful for stress reduction and pain management, the beauty of meditation lies in connection, and that’s best experienced in a group setting, says Sherry Williams, a meditation teacher with the Seattle Mindfulness Center in Seattle’s Phinney Ridge neighborhood.

Meditation class offerings vary greatly from center to center, says Williams. “When you’re looking into a class, you should talk to the instructor. Find out about their background and their own meditation practice, and what they include in their class.” Queries to consider: Do participants stay seated or move around? Is chanting involved? Is the class entirely introspective, or do participants talk to one another?

“When you’re experiencing stress or pain and you come to a class of people working on this together, there’s an understanding that you’re not alone,” says Williams. “There’s resonance in human suffering.” And in meditation’s power to relieve some of it.

Visit fryemuseum.org and seattlemindfulnesscenter.com to learn more about getting started with meditation.