Finally, there’s a definitive restaurant on Bainbridge Island that highlights the best of the region 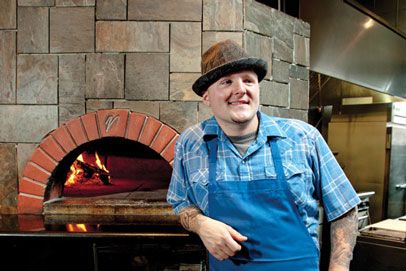 Chef Brendan McGill worked at Seattle restaurants Il Bistro, The Harvest Vine, the now-defunct Cremant and for the Via Tribunali group. But when it came time to open his own restaurant, he was drawn to Bainbridge Island, where his wife’s family has lived since 1890.

Hitchcock takes its name from McGill’s wife’s family tree, and the food feels just as personal. Aside from a simple cure or smoking, Hitchcock’s kitchen does little to alter the product that comes in from Bainbridge’s network of farmers, fishers and producers; he buys Bainbridge products whenever possible, and almost all the meat, fish and produce comes from the Puget Sound area.

The kitchen can alternately wow you with the simplicity of an asparagus spear (part of the tasting menu in which patrons name their price, between $30 and $50, and McGill prepares dishes accordingly) in delicate tempura, or an expertly cooked hanger steak ($22) adorned with fiddlehead ferns.

The spare dining room is dominated by giant windows overlooking busy Winslow Way. McGill’s charcuterie, already a hit at the restaurant, is destined for grocery store shelves around the region under the Hitchcock label; he’s hoping to have his USDA certification completed by early 2012. Until then, you’ll have to make the trek to buy it on the island.