Breads, rolls, biscuits and butter for your holiday table 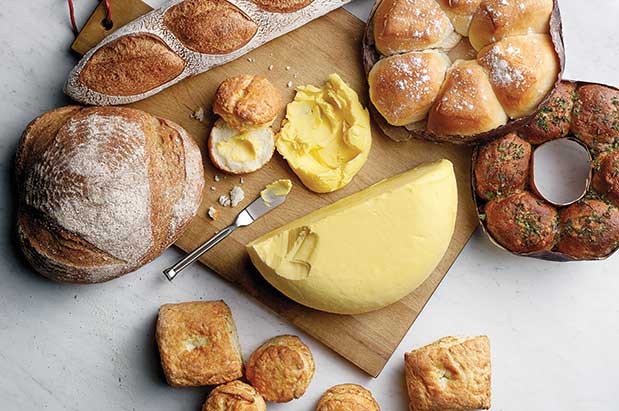 You’ve put all that thought into the celebration spread for your holiday meal—don’t lose steam before getting to the beloved, holy staples of bread and butter. As with everything else, ’tis the season to consider some new options.

Dinner Rolls
For the nostalgic comfort of classic dinner rolls, hit up Macrina Bakery. Its tender and buttery buttermilk dinner rolls are baked in oven-safe trays, so you reheat them just before serving—bringing on a dose of fresh-baked aroma. Going a little less traditional, you say? Then pick the porcini harvest dinner rolls, flecked with dried porcini and fresh herbs. (We hear these are particularly fabulous for day-after mini sandwiches.) Both types of rolls ($5.25/tray of 6) will be available until Jan. 3 at Macrina bakeries, but for a sure bet, call ahead to place an order. Belltown, 2408 First Ave.; 206.448.4032; Queen Anne, 615 W McGraw St.; 206.283.5900; SoDo, 1943 First Ave. S; 206.623.0919; macrinabakery.com

Baguette
Interested in a sleek baguette with which to grace your table? The baguette that’s been anointed as the city’s best—at the French-American Chamber of Commerce’s French Fest, no less—is that of Columbia City Bakery, three-time winner of the chamber’s Best Baguette contest. The gorgeous loaf ($4.50) is crusty but not hard on the outside, airy and toothsome inside. It also comes in a seeded version ($4.75). And both plain and seeded are available in a slenderer ficelle loaf ($4.20/$4.65). Columbia City, 4865 Rainier Ave. S; 206.723.6023, columbiacitybakery.com

Rustic Loaf
For a more robust option, head to Tall Grass Bakery for a loaf of its pain au levain ($5), with its mild sourdough flavor. The light-style whole wheat bread has a somewhat chewy texture and will be a great complement to whatever is on the menu. You can also get this bread with walnuts (baked in a larger loaf at $10, but you can buy half a loaf for $5), amping up its already nutty character (particularly delicious with cheese). Both are regularly available at the Ballard store, and at the bakery’s farmers’ market stands (Sundays in both Ballard, sfmamarkets.com, and West Seattle, seattlefarmersmarkets.org, this time of year). Order ahead if you want to get your loaf on those busiest holiday-eve days. Ballard, 5907 24th Ave. NW; 206.706.0991; tallgrassbakery.com

Biscuits
You can serve all the fresh-from-the-oven pleasure of homemade biscuits—requiring little more than a bowl, a spoon and some buttermilk—if you grab a canister of biscuit mix ($6.99) from Honest Biscuits (Pike Place Market, 1433 First Ave.; 206.682.7179; honestbiscuits.com). The business has been a regular at a number of area farmers’ markets for four years, and came out with its mix (which uses local Shepherd’s Grain flour) a few years ago. The mix also comes in a gluten-free version ($13.99). You can buy the mix at the Pike Place Market store, as well as at its West Seattle farmers’ market booth on Sundays (plus other markets in season).

Better with Butter
As for the delicious butter to spread on those breads, the array of options today is richer than ever. Regular grocery dairy cases now offer several domestic and European producers. Labels to keep an eye out for include Vermont Cultured Butter, Crémerie Classique, Kerrygold, Plugra and Paysan Breton. A few spots within Pike Place Market sell a range of great butters, including DeLaurenti (1435 First Ave.; 206.622.0141; delaurenti.com),

Most cooks stock up on unsalted butter, which is typically preferred in recipes—especially for baking. When it comes to spreading on bread, salted butter is most definitely used more often; the boost of flavor from the salt makes bread especially delicious. Some butters use a flaky salt that adds a little crunch to boot. Or take a cue from Macrina Bakery founder Leslie Mackie: Chop a few of your favorite tender, fresh herbs, toss them with flaky sea salt and sprinkle it over pieces of unsalted butter for serving with bread. Salted butter done your own way!

One of the delights among local butter producers is Cherry Valley Dairy (cherryvalleydairy.com) in Duvall. Its herd of Jersey cows produces extra-rich and creamy milk, with the telltale deep yellow color it has in butter form (the dairy makes unsalted and gray salt versions, with a surprise variation in the works for the holidays). Calf & Kid sells it in big rounds from which you can get custom by-the-ounce portions, $22 per pound, with a little $2 “taster” size; also available at a handful of other Seattle shops and at the Broadway Farmers Market on Sundays (seattlefarmersmarkets.org) this time of year.

Go back to the main Ultimate Holiday Take-Out Feast article.