When an unsightly garage brought her down, a Sunset Hill woman built it up 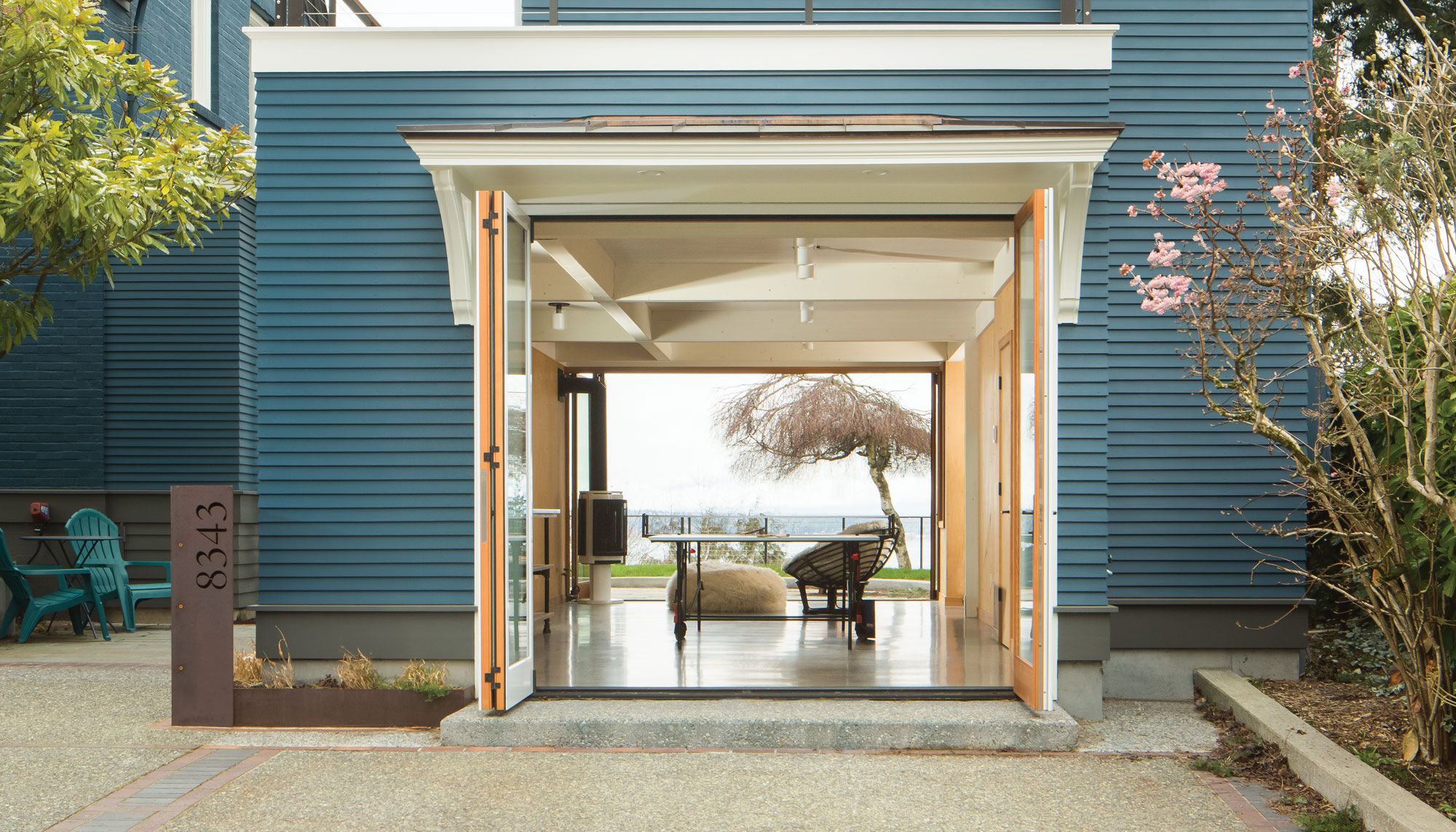 We may have the 1970s to thank for larger kitchens, the generous use of skylights and rooms that mesh with their natural surroundings. But for one Seattle homeowner, all the decade left behind was a squat, unremarkable freestanding garage that sat glaringly at odds with the main house, a 1925 Dutch Colonial in Sunset Hill, perched on the bluff above Golden Gardens Park. “I always felt frustrated that the garage—an ugly troll of a structure—occupied so much of the backyard, which offers sweeping views of Puget Sound and the Olympic Mountains,” says the homeowner (who wishes to remain anonymous).

As her frustration festered, her family’s needs were also changing. A single mom with a teenage son, the homeowner needed less garage and more of a flexible space that could house out-of-town guests, host pingpong matches and have room enough to eventually build a Wineglass Wherry rowboat from a kit that’s currently resting in boxes. In other words, they needed a detached accessory dwelling unit (DADU).

Contractor Mike Carlin of Toepfer Construction Company, who was working on renovations in the main house, heard the homeowner’s ideas and suggested that she hire Theresa Freeman of SHKS Architects, whom he had worked with in the past, to flesh out the concept and make her DADU dreams a reality.

“[The homeowner] was clear that she didn’t want a modern box,” Freeman says. “She hoped it would sit nicely with the main house—a sweet spot between old and new, and that guided the building’s simple gable shape as well as the materials we used throughout.” From left, The new structure was built 10 feet back from where the original garage stood, allowing for more backyard space; Mobile tool chests are in a space designed to house a range if the homeowner decides to complete a kitchen in the future; This decorative laser-cut steel gate, designed by SHKS and built by T-Tech Welding & Fabrication, was one of the final touchesFirst up: The team tore down the existing garage and built a new, 970-square-foot structure situated 10 feet back from the original footprint, away from the edge of the bluff and toward the street, to create more space in the backyard. Freeman also considered the DADU’s placement in relation to the main house to avoid obliterating views and continue to let light into the home. Photography by Alex Crook.

To maintain a sense of privacy from the street while still opening up the DADU to cool breezes and the impressive view, Freeman installed LaCantina glass folding doors on each end of the ground floor. The design allows the homeowner, an avid whitewater rafter, to back in a boat trailer, so she can work on her rafts. With the help of fellow SHKS designer Cassidy Zimmerman, Freeman decided on durable finishes that would take bumps and bruises in stride: polished concrete for the floors and, for the walls, plywood coated in Osmo Polyx, a nontoxic wood finish derived from natural vegetable oils and waxes.

“If the trailer gouges or brushes up against the wall, the plywood is going to have a much longer life than sheetrock would, and the bumps, dents and dings can just become part of the patina,” Freeman says.

Although the heavy lifting will likely stay on the main floor, Freeman continued the “not too precious” aesthetic upstairs. Whitewashed pine boards line a narrow stairwell, as well as the walls and ceiling of the upstairs spaces: a bedroom and bathroom. The floor plan and finishes may be simple, but the second floor has plenty of luxurious detail. To the west, another set of folding doors opens up to a wooden, tiled deck with a bird’s-eye view of the Sound.

“Up here with the openness and the simplicity of the whitewashed pine, and throughout the entire space in general, there’s this palpable connection to light and the outside,” Freeman says. Photography by Alex Crook. From left, Wood and metal elements used for shelving and railings mimic the industrial aesthetic of the basement renovation in the main house; folding glass doors provide unobstructed views; a bathtub sits behind sliding doors

For the homeowner, the DADU achieves a modern functionality that coexists effortlessly with her historic home.

“It was not an easy feat, but Theresa pulled it off beautifully,” the homeowner says. “I wanted a stylistic harmony between the two structures, and I got it, along with a new sense of how we connect to ourselves and each other as a family.” This versatile DADU was selected by a panel of architects for the AIA Seattle Home of Distinction program in recognition of its compact yet spacious living areas that can evolve to serve a variety of uses for the client over time. Dreaming about a home design project and not sure where to start? AIA architects can help. aiaseattle.org/askanarchitect