AIA Home of Distinction: Inside a View Ridge Midcentury Makeover

After a decade and a half of dealing with drafty windows and one too many system failures, a Seattle couple made the move to update their cherished View Ridge home 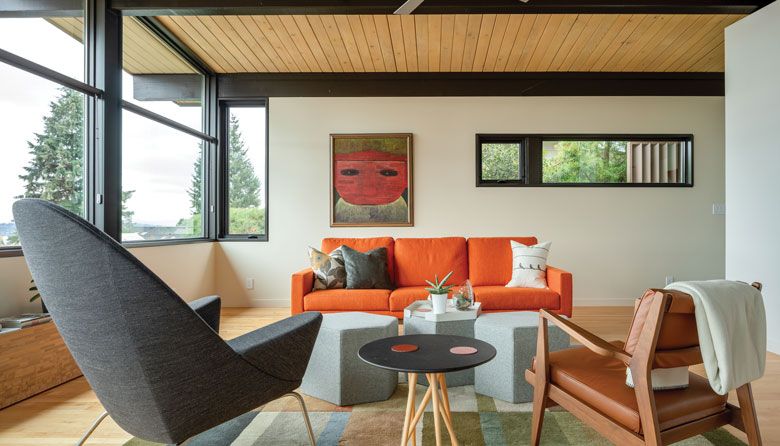 When Seattle residents Leslie and Paul Piacitelli began looking for a new home in 1999 to accommodate their growing family, city neighborhoods northeast of the couple’s small Fremont townhouse weren’t on their radar. But when a real estate agent introduced them to a 2,470-square-foot View Ridge residence with classic 1950s post-and-beam construction, loads of natural light and a gorgeous view of Lake Washington, they fell in love with the mid-century modern architecture and jumped at the chance to make it their own. BEAM WORK: Steel support posts, added to bolster the ceiling in the absence of the original fireplace, lend structure to a new kitchen island; overhead, ceiling beams create continuity between the living room, dining room and kitchen spaces.The window height was raised for privacy but still offers expansive views of the lake

The honeymoon didn’t last long. In the main-floor living room, single-pane, floor-to-ceiling windows original to the 1957 home were ineffective at keeping out the elements. They let in the cold and moisture every winter, and in the summer, the room was too hot to enjoy. Privacy was an issue, as well. People passing by had a clear view into the living room, and the couple began to feel like they were living in a fishbowl.

After years of putting off what they were sure would be a costly and emotionally charged project, in 2015, the Piacitellis had finally had enough. The couple, both of whom have backgrounds in creative fields—she helps launch new products as a project manager for a Seattle-based company, and he’s a custom furniture designer—made a list of priorities, including thermal improvements and a more functional solution to the outdated kitchen and main bath. Then they began their search for an architect to reenvision their home. After speaking with a friend who had recently worked with Seattle-based Eggleston Farkas Architects, the couple hired principal Allan Farkas to take on the challenge of maintaining the overall aesthetic of their home while giving it the modern upgrades it needed to satisfy a 21st-century way of life. OUT OF SIGHT: Despite big changes inside, architect Allan Farkas kept the home’s exterior styling close to its original mid-century aesthetic

To begin, Farkas and his team considered the home’s main floor, which includes the kitchen, living and dining rooms, as well as the bedrooms and bathrooms. To stay within budget and scope, they left the bedrooms and a master bath intact while taking the rest, roughly 60 percent, down to the studs to accommodate, among other things, plumbing and electrical upgrades. Stripping the space down to its framing also cleared the way for the addition of new windows and insulation, as well as a more open floor plan for the kitchen, living and dining areas. To address the fishbowl effect, Farkas replaced the former floor-to-ceiling windows, lifting the window sill a couple of feet off the floor and creating a shorter window bank, just high enough to block the line of sight from the street into the main floor.

In the center of the living space, an imposing basalt stone masonry fireplace presented an obvious challenge to the couple’s desire for a more modern open floor plan. Although it meant splicing together two of the exposed ceiling beams and adding two weight-bearing steel posts for support, Farkas and his team removed the fireplace, along with the small semi-enclosed kitchen that sat directly behind it. With those structures gone, Farkas installed what he refers to as “the wedge.” At 24 feet long and 3 and a half feet wide, the architectural element organizes the main floor into two distinct zones. The family’s bedrooms and bathrooms are behind the wedge toward the back of the house while the kitchen, living and dining rooms are oriented to the front, toward the view.

“Our decision to demolish the original fireplace allowed us to reconfigure the orientation of the kitchen, dining and living spaces,” Farkas says. “Originally, the living room faced toward the fireplace, away from the view, and the kitchen was sort of tucked up behind it. By gutting the room and adding the wedge, we were able to open up the kitchen to the living and dining room space and make it all one big room with a great view.” The wedge offers plenty of functional advantages, as well. The front, street-facing side of the wedge houses a gas fireplace; kitchen appliances, such as the range and refrigerator; and plenty of storage for mealtime essentials like cookware and dishes. The backside of the wedge closest to the home’s entry features storage cubbies and a built-in bench with space below for shoes. The backside of “the wedge,” by the home’s entry, features a built-in bench with storage

As Farkas and his team were removing the fireplace and part of the ceiling above a lower-level rec room to replace the plumbing and electrical systems, it became clear that a few improvements could significantly improve the comfort and functionality of the rec room without adding too much to the overall budget. With a green light from the homeowners, Farkas’ team stripped the room of its acoustical-tile ceiling, a seldom-used wet bar and wall-to-wall carpeting. Upgraded finishes, new drywall and a freshly refinished concrete floor transformed the room into a cozy addendum to the modern space above, with a sitting area perfect for a sectional sofa and a couple of Paul’s custom wood tables. At the center of the lower level, Farkas’ team designed an enclosed laundry room to house a washer, dryer and utility sink that previously sat out in the open. And beyond the laundry, opposite the rec room’s sitting area, an exercise area doubles as a place for Paul, an avid biker, to store his gear.

Despite the home’s original deficiencies, making the decision to remodel wasn’t easy for the couple. But they couldn’t be happier with the way it turned out. “Cooking together with all the open space and the view is definitely more fun,” Leslie says. And for Paul, “Just being able to comfortably sit and talk in the living room or enjoy dinner at our dining table is really nice. There’s not a day that goes by when I don’t look around and appreciate that we have this.”

> This enhanced remodel was selected by a panel of architects for the AIA Seattle Home of Distinction program due to it significantly improving the overall functionality, thermal comfort, privacy, and livability of the home. Dreaming about a home design project and not sure where to start? AIA architects can help.