AIA Home of Distinction: Inside a Wooded Whidbey Island Residence 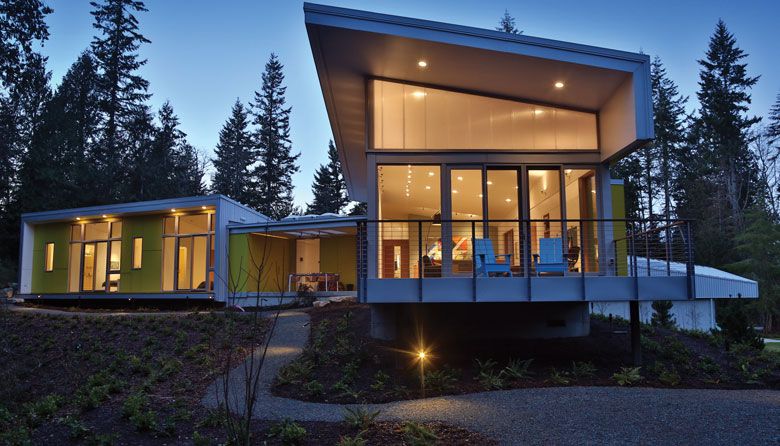 All photos by Michael Stadler

“V” FORMATION: Architect Tom Lenchek of Prentiss Balance Wickline Architects used floor-to-ceiling windows and a polycarbonate clerestory on the back of the main residence to let in precious light; the west wing (left) is a master suite and guest quarters, while the east wing (right) features a dining room, kitchen, living room and large outdoor deck This article appears in print in the November 2018 issue. Click here to subscribe.
Any successful home project requires cooperation and collaboration between architect and homeowner. But what happens when something bigger, older and darker takes a seat at the table? When that something is a dense 10-acre swath of forest teeming with second-growth cedars and gullies galore, you can bet it will have the final say. For a couple of Seattle artists building their full-time residence and studio retreat on Whidbey Island, giving in to the forest gave them exactly what they were looking for—even if, at least in the beginning, they didn’t know exactly what that was.
In 2013, with the cost of Seattle studio space soaring, it became clear to painters Mary Jacobson and Michael Howard that they’d be better off buying a home/work property outside the city limits. “At some point, we began looking at Whidbey Island,” Howard says. “I said to Mary, ‘Oh my God, if we lived on Whidbey, we could own a park.’” To choose a color palette that satisfied his artistic clients, Tom Lenchek spread paint swatches on the forest floor to choose which bright hues best complemented the natural environment
With the help of architect Tom Lenchek of Prentiss Balance Wickline Architects, the couple narrowed down the options, settling on a heavily wooded 10-acre lot adjacent to a 30-acre greenbelt on the south end of Whidbey Island near the town of Langley. “We didn’t have a lot of preconceived notions,” says Jacobson, a painter who specializes in colorful images of multidimensional store windows. “We wanted spaces that were low maintenance and suited to our individual needs as artists, but other than that, we were happy to let Tom interpret that architecturally.” To keep the main house interiors low maintenance, Lenchek recommended concrete floors, white walls and warm tones
Howard, a former fine arts professor whose current studio practice focuses on large, colorful abstract paintings, did have one esoteric request: a house that was “an unconventional conventional space.”
Lenchek rose to the challenge, first envisioning a series of metal-clad buildings hidden in the forest. But when the team discovered that, despite many healthy trees, there were also a number of large cedar and fir trees that were rotten, they had no choice but to cut them down. With a new meadow-like opening in the forest to work with, Lenchek and designer Shawn Kemna settled on four buildings—a house, two studios and a garage—clustered together in a nonlinear arrangement on one of the highest parts of the lot. The seemingly random but, in fact, very deliberate siting of each structure not only creates an entry courtyard from the drive, it also helps provide continuity between the buildings while taking advantage of unique focal points in the surrounding forest. “The design, ultimately, was contingent on the site,” Kemna says. “The shape of the land and the layout of the forest had a strong say in what each building ended up looking like, as opposed to just making something and then plopping it down anywhere.” Michael Howard’s art studio is lit by a combination of natural diffused light and artificial fluorescent lighting that closely matches daylight
To fit into its surroundings, the main house—a single-story, 1,800-square-foot structure with two distinct rectangular wings that jut out in a kind of V formation—perches on the edge of a gully overlooking the forest. Nearby, Jacobson’s 1,000-square-foot Meadow Studio faces a small clearing, and Howard’s 1,100-square-foot Valley Studio sits roughly 150 feet away from the main house (as far as Lenchek would let Howard go) on a flat spot overlooking another gully on the northwest end of the property. The buildings, including a two-car garage, are connected with a walkway made of bamboo composite boards. A bamboo composite walkway connects Mary Jacobson’s studio (orange building) to the main house and other buildings Though each building is decidedly different in terms of its site and use, unifying design elements create a sense of cohesion throughout the grounds, connecting the buildings to one another and the woods. On each building, double-pitch roofs coupled with generous overhangs help maximize low winter light and block high rays in the summer. Meanwhile, polycarbonate clerestories (basically, a wall of windows above eye level) diffuse the incoming light, abstracting the patterns of the forest and adding to an overall “art gallery feel,” Lenchek says. To finish the outside of each building, the team used corrugated Galvalume metal siding for its durability and man-made aesthetic. Paired with fiber cement panels painted with bright pops of color—hand-chosen by Jacobson and Howard from paint swatches they scattered on the forest floor—the industrial materials offer a carefully constructed counterpoint to the natural surroundings. A small lounging area in the loft of Jacobson’s studio provides space to relax and reflect
“The forest is so complex, so as artists, it’s infinitely stimulating to just stand, look out and feel that you’re somehow part of it all,” Howard says. “The light that filters through the trees is particularly beautiful, and Tom and his team were able to refract and amplify that light in a really soft way. At the same time, we love the way the contours of the buildings interact with the land, resembling cast shadows. It’s one of the most fascinating aspects of being out here.” KEEP IT COOL: A double-pitched roof and generous overhangs help keep the couple’s bedroom a comfortable temperature by letting in low winter light but blocking warm summer rays This carefully abstract structures within a forest clearing was selected by a panel of architects for the AIA Seattle Home of Distinction program. Dreaming about a home design project and not sure where to start? AIA architects can help. aiaseattle.org/askanarchitect Resources Prentiss Balance Wickline Architects
Tom Lenchek, principal architect
Shawn Kemna, designer
206.283.9930