AIA Home of Distinction: This Queen Anne Remodel Honors the Home’s Historic Past 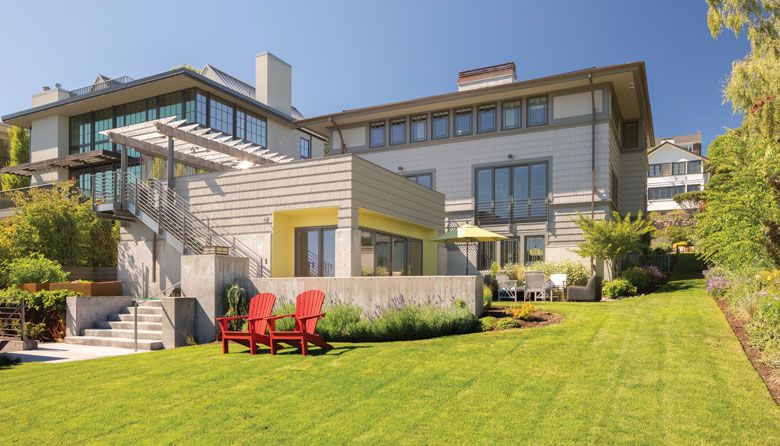 DETAIL ORIENTED: Architect David DiMarco used the original drawins for this 1912 Queen Anne house as a resource when working on a remodel to restore “an authenticity that the exterior of the home had missed out on for years” with details like custom copper downspouts that he commissioned to mimic those that had been removed at some point in the home’s history. The one-story addition, just behind the garden’s concrete half wall, contains a rec room and rooftop deck. For landscaping, the homeowners worked with Octavia Chambliss Garden Design.

All photos by Alex Crook.

Like most cities with a robust stock of old homes, Seattle has its share of bad remodels, and architect David DiMarco has seen the worst of the worst. “There are so many ways a remodel can go wrong,” DiMarco says. “I often find myself undoing questionable design decisions that were made over the history of a house.” The formal dining room, with a stained glass window that was a gift from the architect, can be closed off from the entry area with pocket doors. Throughout this space, the wood flooring was salvaged, patched and refinished with a dark stain

Even Seattle’s most distinctive homes can use the help of an architect skilled in making things right. So, DiMarco occasionally partners with local real estate professional Chris Doucet of Compass Real Estate to offer his opinion on the potential of homes her clients are considering. (Doucet was with Realogics Sotheby’s International Realty during the project described here.) After two years of helping a Seattle couple (who wish to remain anonymous) identify what they hoped would be the perfect family home, DiMarco walked into a 4,180-square-foot, 1912 Prairie School–style residence on Queen Anne’s south slope and knew almost immediately that this house was the one.

Although most of the house had not been updated, except for a kitchen remodel and an update to bathroom fixtures in the 1970s, the overall size of the spaces held promise, and there was large backyard, which was essential for the couple and their young daughter.

“It needed a lot of help, but the design integrity was intact, and I was certain my clients would enjoy the process of making it their own,” DiMarco says. It didn’t hurt that the property had architectural significance and a spectacular view. Originally designed by Seattle architect Andrew Willatsen (a former draftsman for Frank Lloyd Wright) and his partner, Barry Byrne, the home is a stunning example of the Prairie School style of architecture, with its hipped roof and horizontal ribbons of windows. To make the most of the backyard views, service rooms like the kitchen were at the front of the house, while day-use rooms and main bedrooms were lined along the back, overlooking downtown Seattle, the Space Needle and Elliott Bay. DiMarco assured his clients that this simple, linear organization would lend itself to a remodel that could both honor the past and mesh with the family’s desire for a more modern way of living.

DiMarco’s team began by removing the exterior siding, windows and doors as well as the interior woodwork and plaster wall surfaces down to the framing. While new custom profile moldings, trims and fascia boards helped bring the exterior back to its original grandeur, modern upgrades to the plumbing, electrical and heating systems set the stage for interiors suitable for life in the 21st century.

To achieve an open and informal living space on the main floor, DiMarco created a great hall by removing walls that separated the original living room and dining room. On the north end of the great hall, DiMarco opened the space up to the kitchen. At the south end, he opened a former study turned dining room to the great hall and added large reeded-glass pocket doors, to close it off from the entry when necessary. An original fireplace, refaced with contemporary tile, acts as a dramatic vertical focal point and offers a modern pause to the horizontal nature of the long, open space. A rooftop deck sits on top of a new one-story wing that was added to the house.

“We wanted to respect the historical significance of the home and the spirit of the Prairie School movement by preserving traditional details where we could, but we were careful not to pass off modern additions as part of the original design,” DiMarco says.

On the second floor, DiMarco shifted the hallway that runs the length of the house to enlarge street-facing rooms, including a bathroom and a bedroom/playroom. He also combined an old west-facing (view) nursery and bedroom to create the new master suite with a sitting room, bedroom, walk-through closet and bathroom. A pair of bifold doors allows the homeowners to create privacy by closing off the sitting room from the rest of the suite. A sitting area in the master suite has a midnight blue wall whose color matches original tile work in the space.

With a large extended family, the homeowners also needed space to accommodate houseguests. The daylight basement offered the perfect solution. The downstairs guest quarters include a sitting room, bedroom and bathroom as well as a kitchenette area, with a full-size refrigerator, sink and custom coffee bar. The guest area also has its own entrance from the outside. The master bathroom has windows that look north.

The original footprint of the house included a wing off the southwest corner that was demolished by a previous owner. But when the homeowners wanted more space for casual use, DiMarco suggested an addition that literally went in a different direction. In contrast to the original wing, the new one-story addition extends off the rear northwest corner of the house to make the most of the view and maintain a sense of privacy. Family and friends enjoy movie nights and games of foosball in the rec room, located in the new addition.

With a 700-square-foot rec room for family movie nights and foosball with friends on the ground level and a new viewing deck off the main floor, the wing adds practical space for a modern family while paying homage to the original design intention. “I’m proud of how we were able to honor the original design and make it more livable, comfortable and family-friendly,” says the homeowner. “Now, it’s in great shape to last for another 100 years.”