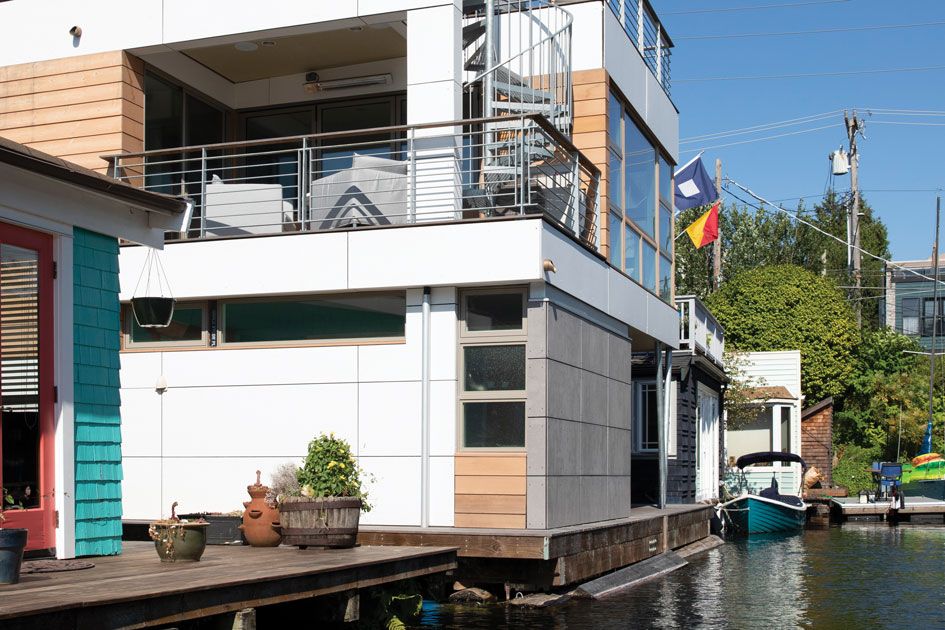 Thanks to a certain 1990s rom-com flick and plenty of local lore, owning a floating home may seem the epitome of Seattle living, yet it’s not for the faint of heart. Realities like strict dock association bylaws, tight spaces and a slight but ever present wobble may temper the romance, but for one married couple ready to make Seattle their permanent home (both are former East Coast professionals, and wish to remain anonymous), a home on Lake Union was about as perfect a spot as they could imagine.

“They wanted to know if they could add a second floor,” says Donnally. “Fortunately, I had been through the house with another client and knew the structure. The existing home wasn’t designed for a second floor, so I let them know they’d have to scrape the house off the lot and start from the raft up.” PERSONAL SPACE: The homeowners agreed that built-in cabinetry was essential in a relatively small space

Donnally’s diagnosis didn’t deter the couple, who bought the property a few days later, in November 2015. Then, with the design and necessary permitting in place by early 2017, Donnally and a team of skilled contractors demolished the existing house, reinforced the raft with more than 200 air-filled barrels, and added new subframing on top to lock everything together. The resulting two-story, 1,500-square-foot floating home fulfilled the homeowners’ wish list: a large master suite, plenty of built-in cabinetry, integrated indoor and outdoor living spaces, and a layout that offers privacy as well as a spectacular view.

“One of the challenges of owning a floating home is that it’s definitely close quarters, and you have to be very cognizant of your neighbors,” the husband says. “My wife and I have lived in apartment buildings our whole lives, so we’ve certainly had close-by neighbors, but owning a home is a little different.” “For a floating home, you can’t do pitched or sloped roofs, because you simply don’t have the volume the way you do with a house on land,” Donnally says. “So, when you have that kind of height limit but want two stories, you’re basically dealing with a box.”

To allay the home’s boxy appearance, Donnally set the second story back several feet on the dock side to both interrupt the front wall’s presence and provide the required power line clearance. Decks on the south side of both levels also help break up the volume. To finish the exterior and add visual interest, Donnally used a combination of white and dark gray fiber cement cladding together with stained cedar boards to create different volumes, layers and textures that intersect and overlap.

Inside, the home features an inverted floor plan in which the tidy entry, with built-in storage, and the one bedroom sit on the lower level. The bedroom suite’s luxurious master bath comes complete with a soaking tub and glass-encased dual-head shower, and a large walk-in closet that is shared by the couple. “The closet was a nonnegotiable for my wife,” the husband says. “So, instead of having a second bedroom, we were able to build that space out. We don’t have kids, and while we love to entertain, having one bedroom means everyone goes their separate ways at the end of the day.”

Upstairs, the second level comprises an open kitchen, dining and living room, with built-in cabinetry along the east wall and a grid-like wall of windows to the south that looks across neighboring rooftops toward downtown Seattle. To satisfy the husband’s desire to watch his favorite sporting events while also enjoying the cool lake breeze, Donnally installed a retractable window opposite the TV; this integrates the living room with a covered outdoor deck that sits about 7 inches above the main floor in the living room. The extra height allows for proper rain drainage below the deck flooring while also creating a stadium seating effect for TV viewing. PUTT PUTT: Among the homeowners’ other wishes: a rooftop putting green and integration of outdoors and indoors via patios for lounging, watching sports and entertaining

To cap off the project, Donnally installed a rooftop deck that offers a stunning 360-degree view and plenty of space to lounge, as well as unique extras such as a putting green and a TV that pops up from the lightweight and durable Kebony wood decking.

“Living here really is the perfect life,” says the husband. “For me, it’s the second-floor deck, where you can sit outside and still enjoy the living room and then the putting green on the deck. I think my wife would say that for her, it’s the closet and all the built-in cabinetry. But when it comes down to it, it’s really just a spectacular place for us to come home to every day.”

> This floating home was selected by a panel of architects for the AIA Seattle Home of Distinction program for its level of detail, quality of craft and its exceptional specificity of design to this particular client. Dreaming about a home design project and not sure where to start? AIA architects can help. aiaseattle.org/askanarchitect 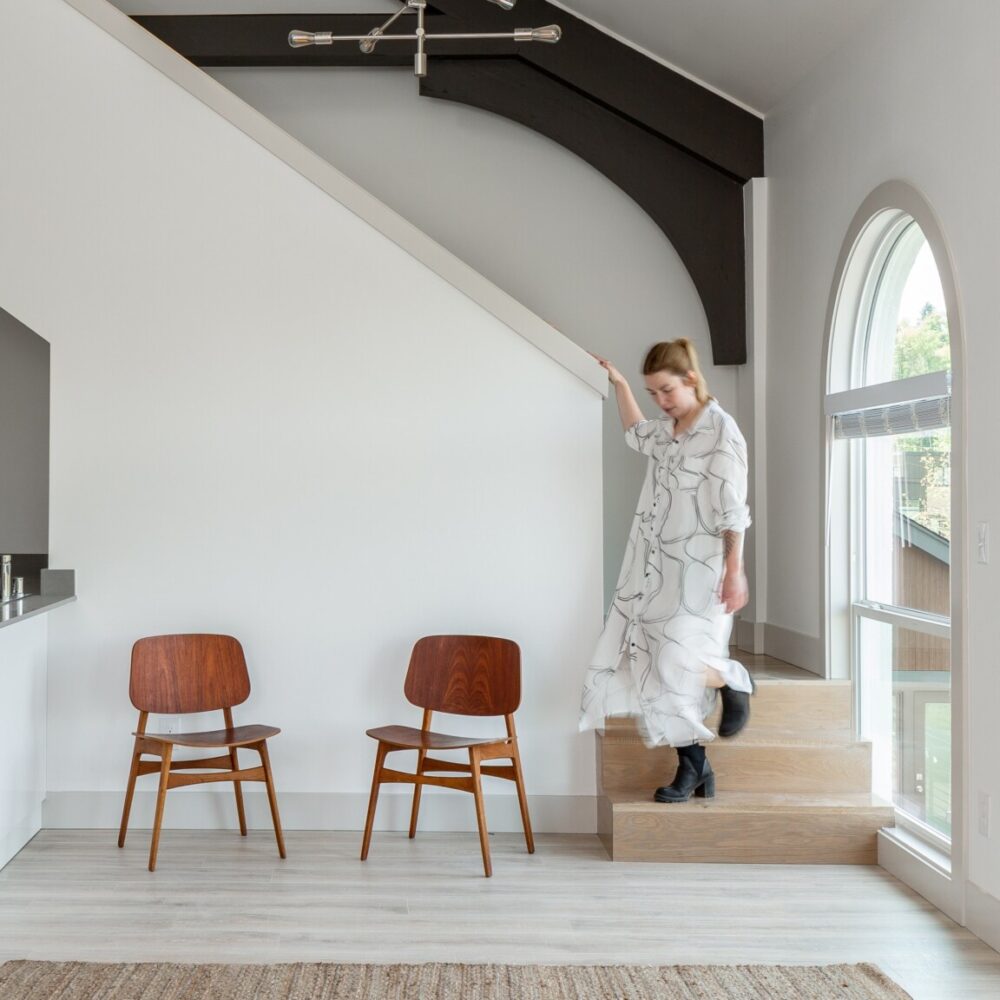 Seattle’s former Columbia Congregational Church and Allied8: A match made in heaven 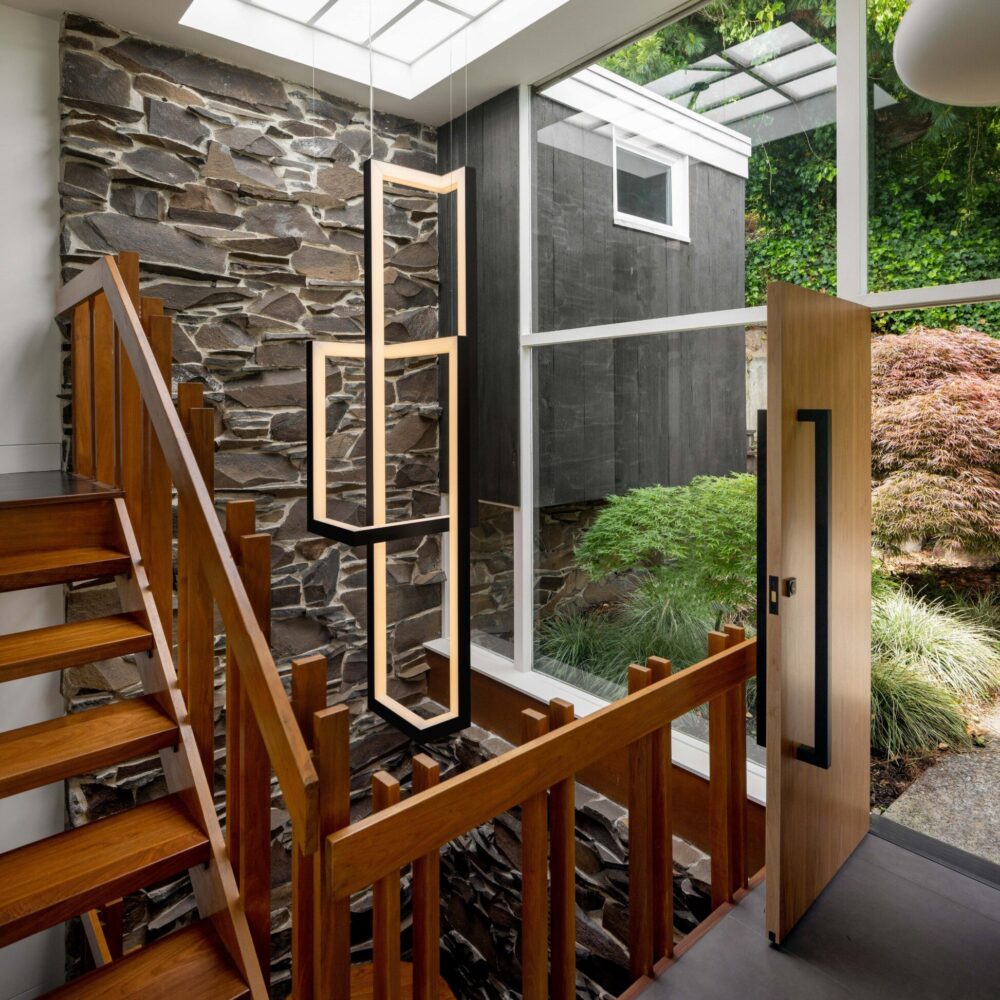 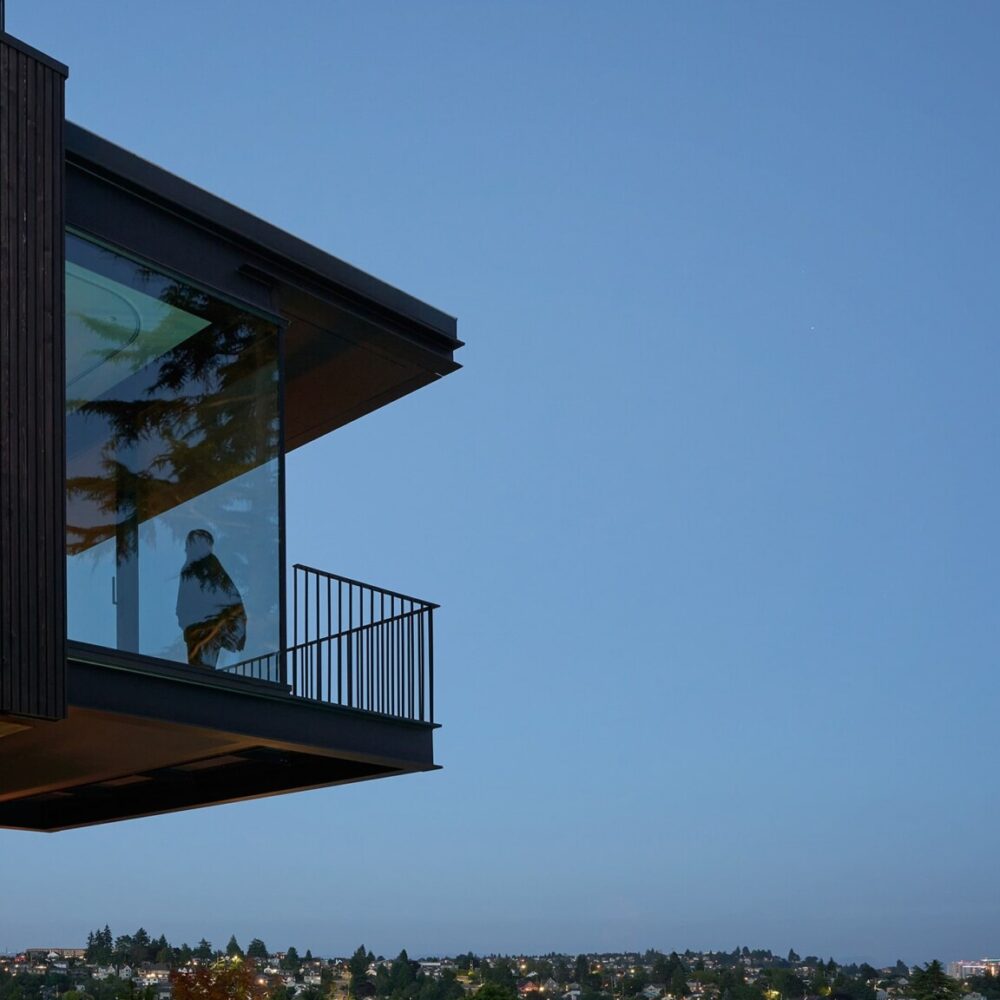