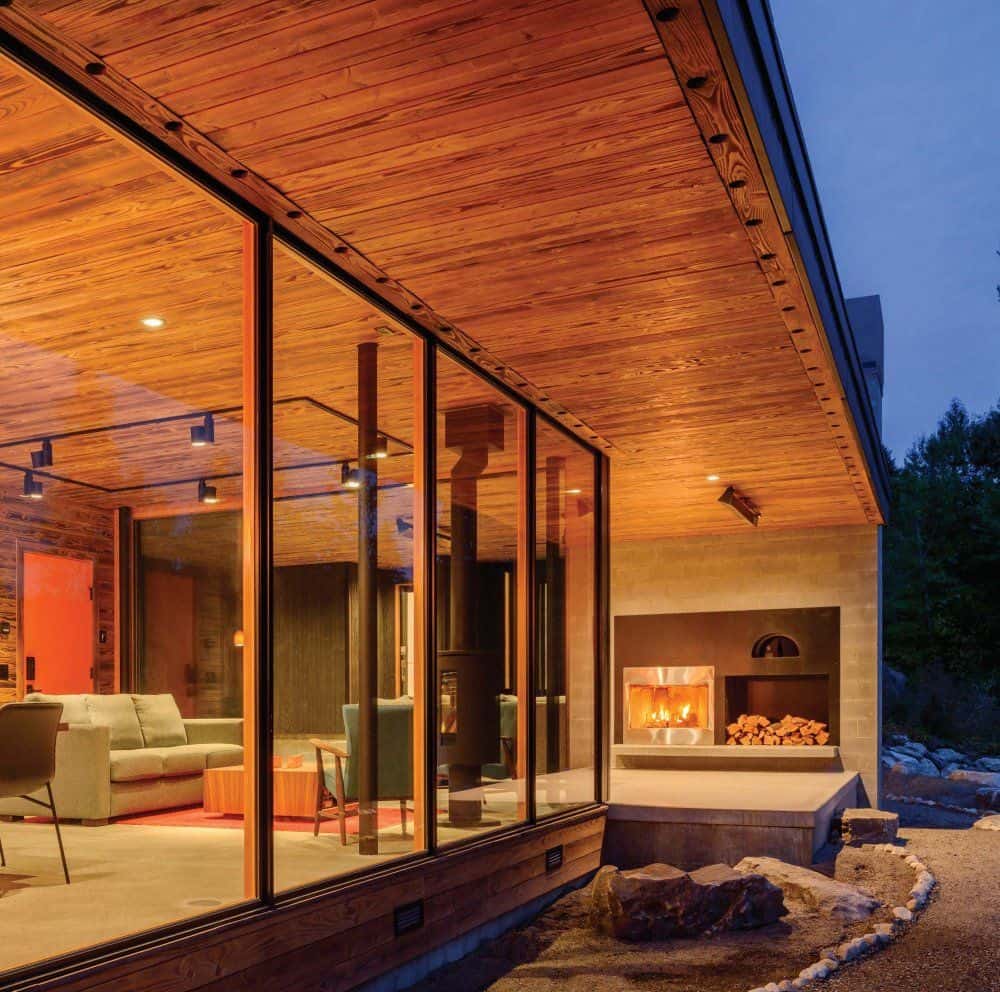 It is sometimes the role of the artist to jar clients from their comfort zone. It is not common for residential architects to be asked do the same.

But that was the challenge presented to Syndicate Smith LLC, a residential and commercial architectural studio in Leavenworth.

Seattle residents Paul Carpenter and Steve Bartz wanted a getaway built on their pristine 5.5-acre lot on the lower slope of Nason Ridge, about a 15-minute drive from Wenatchee.

They sought a structure that would blend in with its surroundings, and Syndicate Smith is one of the more prominent authors of the Austro-German and mountain architecture that dominates the region, including numerous local projects for Icicle Brewing Co. The goal for the split cabin was a respite from the city that would also serve as an outdoor recreation base camp.

“We didn’t want to just stick our 3,000-square-foot-plus house in Seattle on a mountain for a vacation home,” Carpenter says.

It was the first time contracting out a home for Carpenter and Bartz, who spent a lot of time studying Scandinavian and other European mountain home designs. They noticed that the structures were typically very cozy, but not overly comfy. The purpose of an outdoor getaway is to connect nature and people, Carpenter explains.

“In the winter we’re out skiing,” he says, “and in the summer, we wanted guests to be able to enjoy the breeze, the beautiful view, the rustling of the leaves.”

The result is “Split Cabin,” so-called because the structure is bifurcated into an entertainment area and a sleeping structure, separated by a central covered patio. Outfitted with a 20-foot-tall pizza oven/fireplace and a sectional couch and heaters, the patio serves as the central organizing node of the cabin: it is the entry point, circulation space between the wings and an outdoor living room.

In the winter, the outdoor fireplace becomes the focal point, in the great tradition of Western camps. In the summer, a stacking glass door can be expanded to create a single large entertainment room.

“Through the early design iterations with the client, we were all drawn to what differentiates a cabin from a house,” says Steven Booher, Syndicate Smith’s lead architect on the project. “The small inconveniences that add to the experience of being in the woods were what continued to come to mind — chopping wood, walking down a trail to the outhouse, and generally, a more direct connection to the outdoors. With this in mind, the overall arrangement of program elements was driven by the idea to insert a small amount of inconvenience as a nod to those more classic cabin typologies.”

There is no outhouse at the

1,289-square-foot Split Cabin, which has three bathrooms, but primitive technology seemed like an attractive option

at one point. Snaking a drain line to

the septic through breaks in the native granite turned out to be the most challenging aspect of the project. Excavating the granite from the home site was also difficult, but provided the raw materials for some stunning retaining walls and other landscaping elements. Landscaping accounted for $131,000 of the $724,000 overall cost of the project.

Structural columns were set back in the 550-square-foot living area to allow a more continuous flow of windows, further blurring the distinction between inside and out. The floor is polished concrete.

Bedrooms were built as compactly as possible, with no room to walk around

the bed and just 24 square feet of stand-ing space. “You’re meant to sleep in the bedrooms, and that’s it,” Booher says.

“You don’t need a walk-in closet for a duffle bag.”

A minimalist gable and dark shou sugi ban siding lend the sleeping quarters a stately bunkhouse feel. Split Cabin is one of a growing number of high-end architectural projects in a region where mountain homes have historically been owner-built or built by contractors on spec.

Todd Smith, principal and founder of Smith Syndicate, is working to get more recognition for eastern Washington architecture.

“We don’t get a lot of attention from the architectural world. We’re trying to help develop a stronger sense of what the region’s architectural aesthetic might be,” Smith says. “It’s quite a hostile environment, especially in the mountains, very hot in the summer and sometimes below zero in the winter. The seasons are severe.”

This family home was selected by a panel of architects for the AIA Seattle Home of Distinction program due to its creatively changing the experience and views of this home towards a comprehensive design, all within the existing footprint. Dreaming about a home design project and not sure where to start? AIA architects can help. Visit aiaseattle.org/askanarchitect.