This Architectural Beauty Is Not Your Ordinary Vacation Home 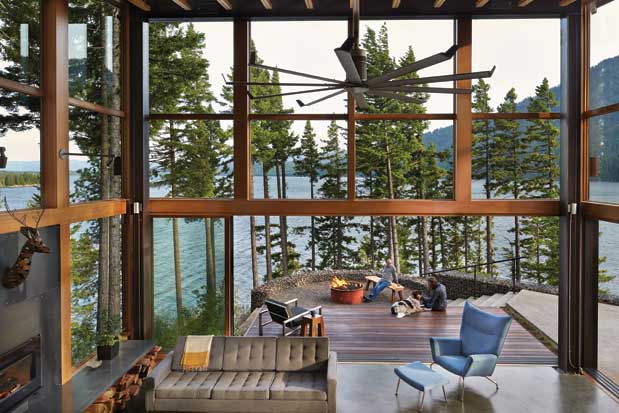 When Bill Broadhead and Julie McCoy found a piece of land just an hour and a half east of the city on Lake Cle Elum, they weren’t in the market for a mountain retreat. Broadhead was looking for a spot to build a snowmobile storage shed. But the site, in the Cascade Mountains near Roslyn, blew him away. “When I saw that piece of land, I knew it was a once-in-a-lifetime opportunity,” he says. The two consulted with builders Chris Jansen and Travis Gibson, who brought in Seattle-based firm Johnston Architects to make their second home a reality. Nicknamed “Base Camp,” it was completed in 2014, and the family has spent whole summers and most holidays there since. Photo Credit: Benjamin Woolsey
Broadhead and McCoy wanted an unpretentious landing pad that could take a lot of wear; the two adults and five sons (ranging in age from 8 to 14) tote tons of gear for their many active pursuits, which, in addition to snowmobiling, include dirt bike riding, baseball and kayaking. To hold it all, Ray Johnston, FAIA, a founding partner of Johnston Architects, included a spacious gear room built out with industrial/fire-station-grade open shelving. Room for guests was also a top priority. “We wanted a space allowing us to spend time with our parents, siblings, nieces, nephews and kids—and have enough beds for everyone,” says Broadhead. The family has staked out favorite areas as their own. His wife is fond of the library. The kids chill out in the theater/game room. They can also learn geography via the Geochron illuminated world map near the front entrance. But in addition to being a welcoming family cabin, the house needed to function as an offsite workspace for Broadhead and McCoy’s Belltown-based political consulting firm, Mercury Group. “We also wanted to use it as a wilderness retreat, giving nonprofit organizations, businesses and political campaigns a safe place to think, plan and play,” Broadhead says.

The lofty, windowed space has room for all, including a massive bunkroom (with an outdoor sleeping porch) that sleeps 13 to 17 people. The common spaces are fluid; the kitchen itself can accommodate as many as 10 diners—a space saving move that is rarely seen in houses of this size. A dining room below the kitchen doubles as a conference room, or “the situation room,” per Johnston; its removed location makes it ideal for getting down to work. Clever sliding door rails are among the many space-saving features in the house
Photo Credit: Benjamin Woolsey

Though the look and feel is rustic, Base Camp boasts the eco-conscious and high-tech features of a cutting-edge smart home.

Ninety percent of the home’s hot water and 30 percent of the radiant heating comes from a solar thermal array. “We use a 1,000-square-foot solar array to heat water to about 200 degrees Fahrenheit and then we store it in large, underground, insulated tanks,” says Broadhead. “Those tanks are essentially a giant hot water battery that we pull heat from during colder and darker months.” Broadhead, a self-professed technology geek, and McCoy can control all the systems in the house from their smartphones via three apps that control lighting, heating, fans and entertainment system, as well as provide security-camera monitoring. Motion sensors in most rooms have programmed light levels according to time of day—a soft, glowing light comes on in the bathroom at night, for example. Even the hallways at “Base Camp” are built for big views. Photo Credit: Benjamin Woolsey

Given all the high-tech gadgetry, Base Camp would fit right into an urban Seattle neighborhood. But the difference is clear. “You cannot see any other houses or development from the house. At night, the only visible lights are on Lake Cle Elum Dam, several miles away,” Broadhead says. “It truly feels like you’re in the middle of nowhere.” The “situation room” below the kitchen can double as a dining room or a conference room Photo Credit: Benjamin Woolsey

This mountain retreat was selected by a panel of architects for the AIA Seattle (aiaseattle.org) Home of Distinction program in recognition of the careful consideration of scale and craftsmanship that is evident in every room, allowing the home to serve as both a relaxing retreat from city life and a functional base camp for outdoor activities. For more images, visit seattlemag.com/home-and-garden. The kids (ages 8–14) often stake out the movie theater/game room, but adults love hanging out there too Photo Credit: Benjamin Woolsey