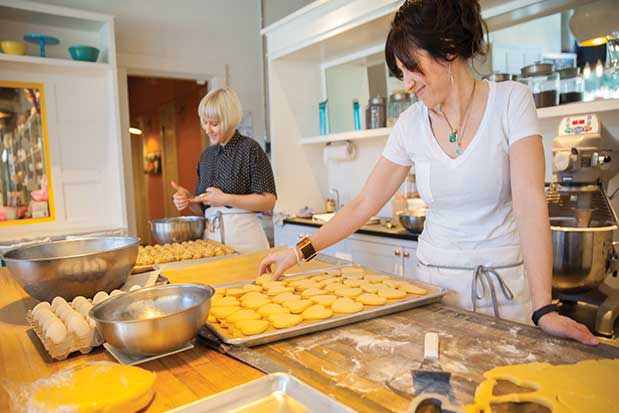 This gem of a neighborhood is located in one of the quieter sections of Capitol Hill, not far from the noise and bustle that is Broadway. The area features tree-lined streets and an eclectic mix of housing—from condos and apartments to Tudor cottages, remodeled bungalows and grand turnof- the-century houses. A deep sense of community is evident here as people go about their daily lives: jogging, going to the market, meeting friends for coffee. Photo by Hayley Young
Tables in front of Cone & Steiner

“This neighborhood is like a family,” says Tracy Treseder, an agent with Windermere Seattle–Capitol Hill on 19th Avenue E. “A lot of us get involved with local community organizations and nonprofits. It’s rare to see a neighborhood so focused on giving back and making a difference.” Service to others is inspired by the good works of several organizations in the community. St. Joseph’s Catholic Church anchors the north end of the neighborhood at 19th Avenue E and Aloha Street, along with nearby Holy Names Academy and the Jubilee Women’s Center. El Cuento Preschool and the Country Doctor Community Health Center anchor the south end of 19th Avenue E and E Republican. “There are a lot of smart people here, with huge hearts. It rubs off on you,” Treseder says.

It’s also a great place to live, according to Treseder. “It’s very friendly. There are tons of great places to walk to. Traffic is rarely an issue. Some of the best restaurants in Seattle are here,” she says. Nosh spots on 19th Avenue E include Asian eatery Monsoon, neighborhood café Tallulah’s, cookie shop Hello Robin, and neighborhood grocery and mercantile Cone & Steiner General. Popular Volunteer Park—with its ample open space, conservatory and the Seattle Asian Art Museum (closed for renovation)—is just over a half mile north.