A Camano Island Home Strong Enough for a Tsunami 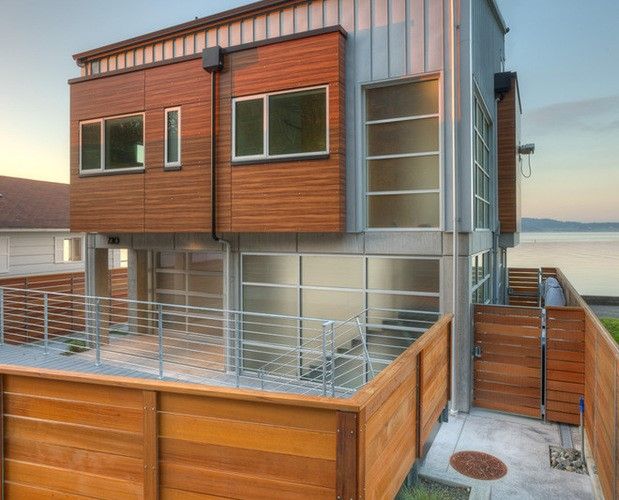 The story of how a modest cabin perched on the edge of Puget Sound on Camano Island, Washington, became a sturdy modernist structure strong enough to take on no less than a tsunami is an interesting one. The owners contacted Dan Nelson, principal at Designs Northwest in Seattle, about a simple remodel for their small, classic fishing cabin. Plans were drawn and permits were issued. But the clients didn’t pick them up from the building department for more than a year. When they finally got around to it, they found that their permits had expired and the government had changed things. “The Army Corps of Engineers redrew the flood plain map,” Nelson says. “Now, by code, any home that’s built or remodeled in this area has to be able to withstand activity in a ‘high-velocity wind zone’—which means a tsunami.” Nelson says the news came as a shock to the homeowners —and to him— but they were able to turn the curveball into a positive design situation. The new requirements necessitated looking at the project in a different way, and the result is a stylish home that’s built for a storm.

Related: How to Prepare for Disaster Insurance Claims

“Basically we had to build a house that would rest on 5-foot piers and that could withstand 300-mile-per-hour lateral waves. If there were walls or windows below, they had to be able to break away,” says Nelson. “We thought, Why not build it on 9-foot piers and give them some living space under the house?”

That idea led to the creation of what the architects dubbed the Tsunami House. The main living space is on the second story; the lower level is what the family calls the cabana. The walls of the cabana are actually industrial garage doors the architects outfitted with fasteners designed to break away under the force of strong waves. The exterior—clad in metal and Vivix siding, a Formica-like product that can look like wood—can also stand up to the elements.

When the garage doors are raised, the path that flood waters could take is clear. For most of the year, the owners use this space as an al fresco family room. “One side opens to the beach, and the other opens to a sheltered patio,” says Nelson.

The family furnished the room simply, with sturdy furniture. Code requires all finishes and fixtures in this area to be waterproof. Although it’s a safety measure, Nelson notes that it’s practical for a room that’s adjacent to the beach.

Futons are comfortable, are easy to move and can be extra beds.

Two Murphy beds behind a wall of cabinets to the left of the seating area fold down to make more sleeping space for guests.

A guest bathroom is tucked under the metal stairs that lead to the family’s quarters. Opaque glass provides privacy while letting light from the main room flow through.