Clean and Serene, This Point Roberts Home Is One Light House 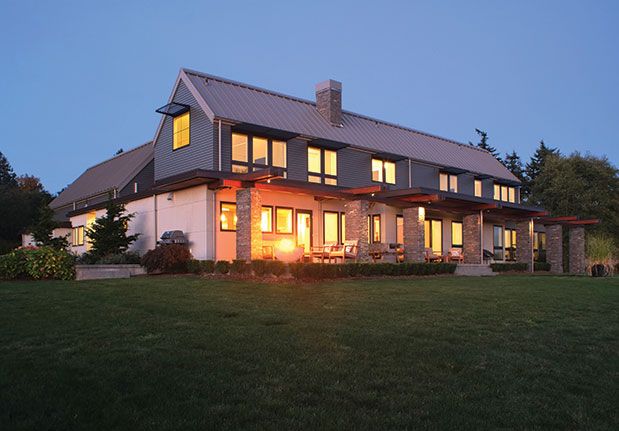 When Sonya and David Liu bought an open, south-facing property (just shy of 1.5 acres) in Point Roberts with a water view and a scattering of mature maple trees, they were clear about one requirement for their future house: It would need to capture every scrap of daylight, even in winter. “Light all day long as much as possible really helps the mind and body feel good,” says Sonya. The couple had previously lived in a rental in the woods and were ready to emerge from the gloom.

They also wanted their home, built in 2010, to fit into the rural community of Point Roberts, population 1,314, where the architecture tends to be agrarian and fairly humble. Located on the peninsula south of Vancouver, British Columbia, Point Roberts falls below the 49th parallel and is an anomaly: part of Washington state, though not connected to it geographically. Living only 40 minutes from Vancouver, where David is an interventional radiologist specializing in cancer therapies, the family can enjoy the rural lifestyle—including horseback riding—while remaining within commuting distance. 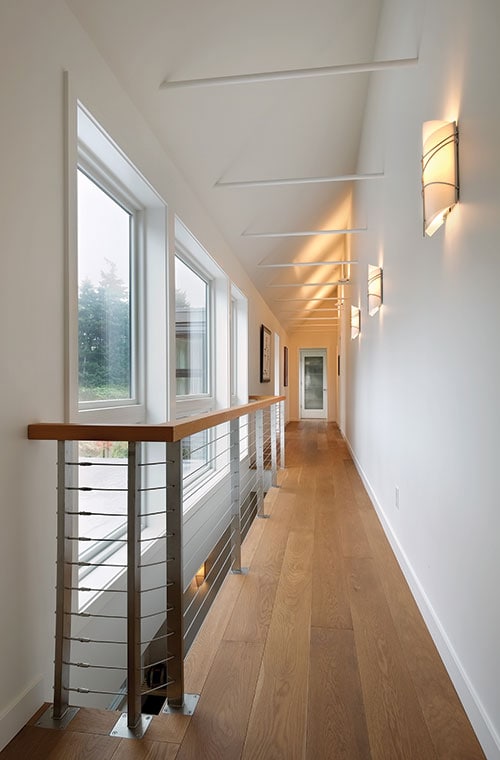 Seattle architect Tim Rhodes, of Rhodes Architecture + Light, responded to their needs with a long, low design for the 5,253-square-foot house, which features an L-shaped plan he describes as “a series of wings, expanding laterally into the land,” with major spaces situated on an east-west axis, and secondary spaces—a laundry room, mud room and additional storage space—forming a supporting wing. Light pours in through large glass-windowed walls, which also provide David, Sonya, and their 5-year-old twin daughters with views of the Strait of Georgia and the Gulf Islands from most rooms.

A form of metal solar shading built into the home structure, called a brise-soleil, was designed for this latitude, to protect the interior from too much direct sun in summer, while allowing winter sun to warm indoor spaces. Deep trellis overhangs allow the family to keep doors and windows open even in the rain. “The house feels like it’s part of the outdoors, and allows the outdoors to come in,” says Rhodes. Basic forms (think kids’ building blocks) on the upper story reflect simple agrarian themes, a nod to Point Roberts and to the American farmhouse style of Rhodes’ Kansas City childhood.

While David says, “There’s still a lot to learn about how materials in our homes could be affecting our longevity,” he and Sonya wanted to create a salubrious environment for their family. This included using healthy home finishes in the interior, which was also designed by Rhodes Architecture + Light with abundant client input. Specifications included natural and low-VOC materials, such as prefinished reclaimed oiled oak flooring, porcelain tiles, no-VOC cabinet box construction, natural counters of quartzite and Caesarstone, and water-based paint finishes. The wine room on the ground floor A master-bedroom bathtub with a view