For Creative Virtuoso Robin Layton, Home is Where Her Art Is

The Pulitzer-nominated photographer's Mount Baker Craftsman is an ode to her art. 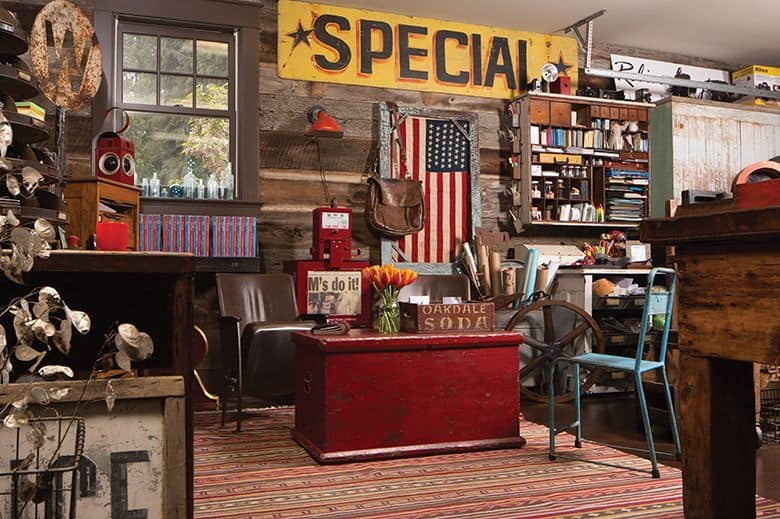 Built in 1998, artist Robin Layton’s Craftsman-style house in the Mount Baker neighborhood is the definition of a mixed-use space: It’s a home, studio and gallery all-in-one. “My favorite things are photography, art, music and antiquing,” says Layton, and there’s ample evidence of these interests in the rooms of her unique house. Her home showcases her talents, from picture frames repurposed from antique wood bog shoes worn by horses to large-scale wallpaper based on her photography (all of which you can see up close by making an appointment).

“I knew when I was 15 what I wanted to do,” says Layton, describing a moment sitting in the living room of her Richmond, Virginia home, flipping through a National Geographic magazine, in awe of the photos. She remembers her mother, Shirley Crump, telling her, “You can do that for a living if you want.”

Through a chance meeting, she wound up at the home of National Geographic photographer David Alan Harvey, who encouraged her to pursue a photography degree at Ohio University and became her mentor. Her photojournalism accolades are numerous, including capturing the iconic “The Smile in the Bottom of the Pile” shot of Ken Griffey Jr. for the Seattle Post-Intelligencer and earning a Pulitzer Prize nomination for her photographs of Seattle’s runaway teens. After 16 years and five newspapers, she turned freelancer as one of the most sought-after photojournalistic-style photographers, working with celebrity clients such as Jennifer Aniston, Sidney Poitier, Sarah Jessica Parker and Oprah. In 2007, she learned that her mother, to whom she was very close, was dying of cancer. While holding onto her mom, Layton felt an urgency to change direction and began to, as she puts it, “find the art inside of me,” through fine art photography. 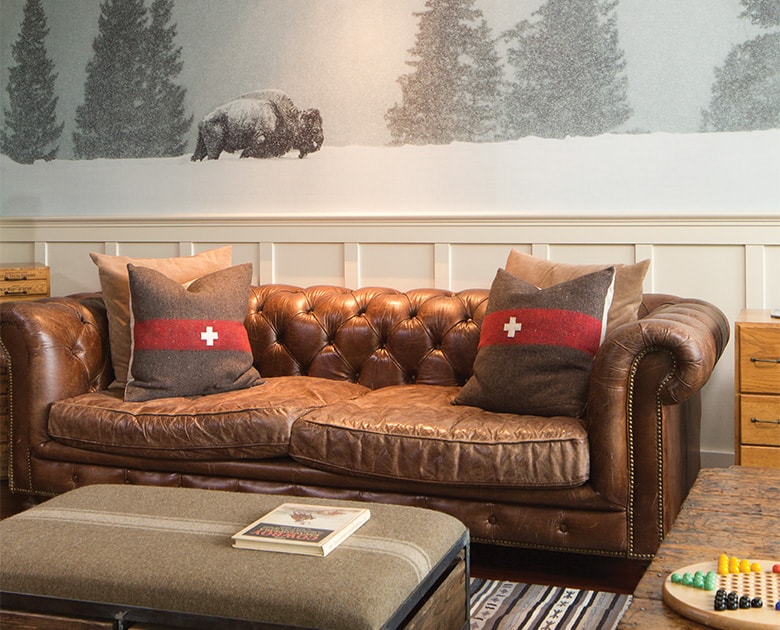 Photograph by Alex Crook. Wallpaper in the den, printed from a Robin Layton photograph, depicts a bison walking through the snowy landscape of Yellowstone National Park—and is part of the artist’s new foray into home decor

What surfaced was a love for found objects and a new way of creating work. “The whole way through this, I’ve just followed my inner voice,” says Layton.

Each piece Layton creates takes a different form, yet eloquently complements the setting of her home. Some favorites created with found objects include a strip of film frames, blown up, showing a white fence and a dog that unexpectedly ran in front of the camera. It’s framed in 19th-century foundry molds for machine parts that resemble film rolls, and hangs above her rustic wood dining table. The leather end chairs around the table are stained dark, matching the dark brown of the molds.

Against a barnwood-paneled wall in her office is an impressionistic photograph depicting a man in a hat walking through a tulip field near Mount Vernon; it’s just out of focus enough to evoke a cowboy disappearing into the sunset. The image, placed in strips, is framed by horse buggy seat springs from a farm in New Jersey.

The setting of Layton’s home—quiet and enveloped by trees and greenery, across the street from the shores of Lake Washington—also informs much of her fine art work. Hanging prominently over the living room sofa is a photograph depicting a bird, wings spread and shaking off water, set in a barnwood frame. Birds and water are common themes in Layton’s work, because nature is where she’s happiest shooting photos. With her two dogs, Georgie and Cowboy, in tow, she walks along the lake daily. “My models I call them, the ducks and the geese,” she jokes about her feathered inspiration.

Though the magic of the outdoors is a focal point for Layton, she creates a magic of her own in her interior workspace. Visually linking her studio and office are reclaimed barnwood panels she handpicked from Barnwood Naturals in Salem, Oregon. “There’s something about barnwood, it’s a warm blanket,” says Layton. 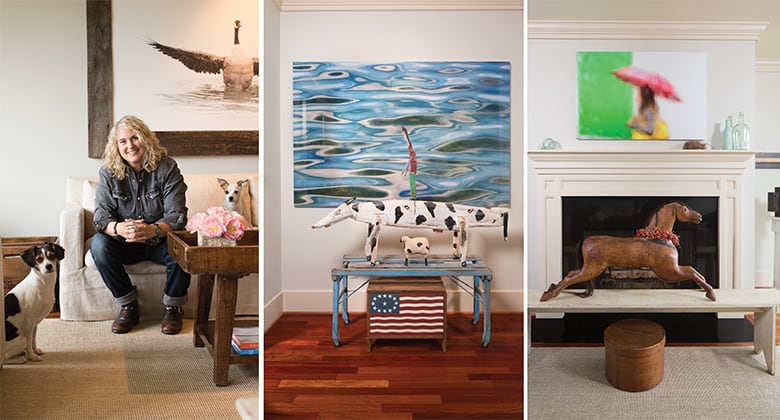 Photographs by Alex Crook. (L-R) Robin Layton sits in her living room, her bird photograph framed in reclaimed barnwood behind her, with furry companions Georgie (left) and Cowboy; Layton’s “Navajo Weave” photograph, a close-up of Lake Washington, hangs on the white gallery-like walls of her living room and showcases whimsical pieces like folk art from Paris and a flag chest made by her parents; Layton’s impressionist photo, shot from a bus on a rainy day in China, sits above the living room fireplace, while a vintage hatbox and turn-of-the-century horse below the mantle show her love of antiques;

Her studio, a converted garage space, contains treasures found during antiquing excursions, such as a giant Roman-numeral clockface, a newspaper stand and a vintage leather mail bag. There are seemingly endless revolving trays and tiny drawers, all filled with collected hardware and vintage trinkets waiting to be incorporated into something new. Layton says this room holds her soul; it’s here that she spends hours constructing her pieces, her favorite music blasting as she works.

Her office, in contrast, is brighter and sparser, with a desk and computer for her digital work. Above it is one of her very first photos, a softly focused pier covered in bright lichen. “I don’t manipulate in Photoshop…my impressionistic work is done in camera,” notes Layton, who has a knack for capturing vivid color in her photos. 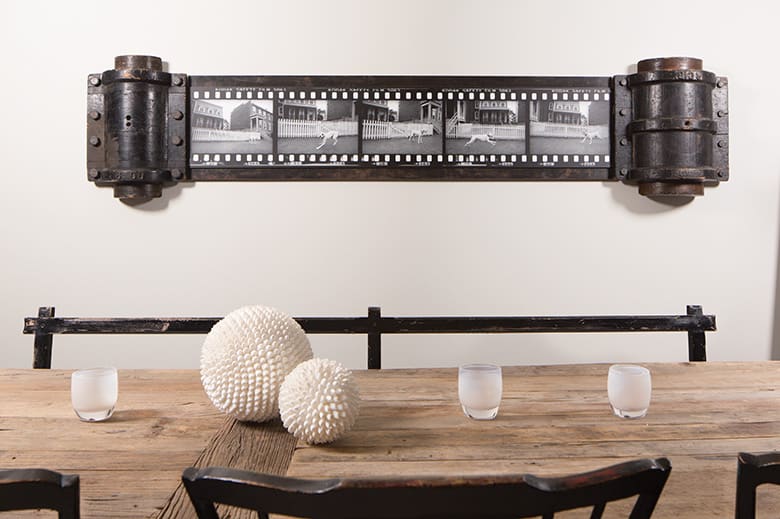 Photograph by Alex Crook. Hanging in Layton’s dining room is a print from a strip of film, portraying a dog that unexpectly ran in front of the camera, framed in machine molds that bear a resemblance to film rolls

With such creative vivacity, what’s next? A Layton home decor line. She recently designed wallpaper from a photo she took of a bison, majestic in a snowstorm in Yellowstone National Park. It nearly spans the width of her den wall. She’s also designing rugs from abstract photo prints for Driscoll Robbins. For someone whose home is a literal work of art, bringing her art to home decor seems full circle.

Layton admits that she sometimes has trouble parting with her one-of-a-kind pieces. But, she says, “It makes my heart really happy that someone loved it enough to take it home…it gives me room to create something else for someone else—and it gives me another excuse to go antiquing!”

Further Viewing
Robin Layton’s fine art pieces are represented in Seattle and New York by the Winston Wächter Fine Art Gallery. Contact Layton through her website for an appointment to view her home gallery, or to inquire about her found object art and decor line.