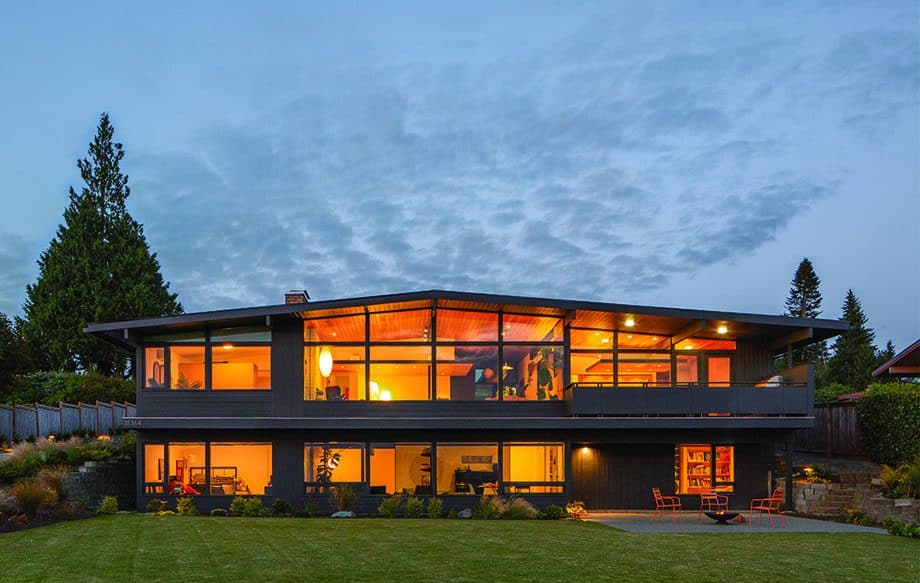 The story begins in 1959, the year the Shoreline home was built as a single-family residence. The home assumed many identities during the ensuing decades until 2006, when it was converted into The Golden Age House for seniors needing memory care and assisted living.

In 2019, tarnished and tattered inside and out by years of deferred maintenance, the 4,080-square-foot midcentury structure was sold to a family of five, necessitating a complex remodel. SHED Architecture & Design, a Seattle firm that specializes in mid-century modern recoveries, performed lots of due diligence before accepting the mission.

What it found was a midcentury gem that sits toward the back of a large lot with territorial views of the Olympic Peninsula and Puget Sound.

“We do the hard work to recognize the value of what is already there,” project architect Rebecca Marsh says. “We want to respect the building.”

That it did. The team found good bones and quality detailing such as stopped-in glazing. The home also had retained the regal bloodlines of classic Pacific Northwest architecture, including large interior volumes of space, blank wall surfaces and long, geometric windows. But chiefly the home had orientation, seemingly poised to set sail for adventure into its macroscopic western view of the Sound and the Olympic Mountains.

On the main level, SHED removed walls and built-in casework and reshuffled program elements. A buried galley kitchen was unearthed and re-formed around a central island overlooking dining and living spaces, allowing access to light, views and a deck.

Moving and enlarging the kitchen made possible a new functional core consisting of a home office, powder room, back pantry, coat closets and garage entrance, focusing the heaviest foot traffic and noisiest activities to one section of the main floor.

SHED strove to create a unified main level where new elements are in harmony with the old. Although extensive reengineering was required to accommodate the revised floor plan, the post-and-beam structure was retained as a principle organizing system and integrated into the design. 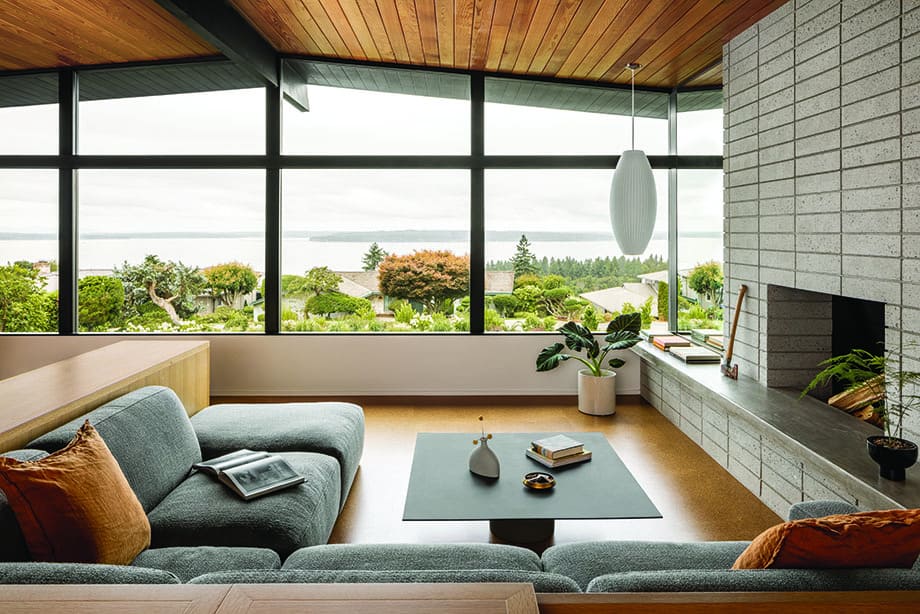 Golden House is brought to you largely by the timber industry, featuring extravagant swaths of rift-sawn white oak and cedar ceilings. A low soffit — one of two installed on the main floor — was framed at the back of the living room to proportion the room while also defining the circulation space.

Diagonals need not apply to Golden House, which is a pleasing patchwork of subtle horizontal and vertical lines. This Zen-like scheme is showcased in the living room, where the fireplace redesign features ground-face Concrete Masonry Unit blocks and a cast concrete bench.
“CMU blocks are inexpensive and the options are endless,” notes Marsh, a Canadian native who studied in London and Berlin, and whose approach seeks to recognize beauty in ordinary objects.

A cozy L-shaped couch is backed by a low built-in cabinet that neatly conceals a DJ station and the homeowners’ large (and fiercely dueling) album collections. Two large, precisely positioned mirrors bounce light and extend the western horizon into the living room. Viewed at the intended angle, the reflection system appears to be additional windows.

A limited palette of warm materials is used throughout the main level: Cork flooring, wood paneling and casework, offset by white sheetrock walls, are framed by wood structure and trim painted black to unify the space. As a nod to the past, the original natural slate tile and metal railing to the lower level were preserved in the entryway.

SHED opened its design kimono in the master bathroom, which bisects two sleeping areas in a 547-square-foot suite. Grass cloth and oak paneling unify the sleeping space, with rough black and white terrazzo tile and elegant coral dragon Thibaut wallpaper featured in the powder room. White oak is used once again as a connecting datum behind the bath mirrors, wrapping around the tub to create a spot for an accent light and plant shelf.

“We really wanted to make this a masterful bathroom,” Marsh says. “You know you’re entering a different zone.”

The lower level is the children’s lair. Wholesale changes to the retirement facility’s floor plan were required to suit three children and their associated hobby nooks, play spaces and entourages. The challenge was to create a space that was simultaneously kid-friendly and Velociraptor resistant. An expansive playroom complete with retractable projector screen greets visitors descending the stairway. A small lower-level bathroom was reconfigured into a segmented vanity, powder and shower space to accommodate multiple users without surrendering all claims to privacy.
Plywood casework and yellow “plam” (plastic laminate) countertops in the downstairs bathroom provide durability and economy, one of several examples where SHED did not limit itself to materials available in the 1950s. Plam was also used in the kitchen and master bath. A small storage room was converted into a shared bedroom complete with plywood bed cubbies fashioned to afford a bit of fort-like seclusion.

The exterior was repaired and painted (Benjamin Moore Wrought Iron) and reed glass panels were installed next to the front door. The team also removed an ADA entrance and driveway to reestablish the lawn.

Performance upgrades include a mini-split heat pump for the master suite, an envelope upgrade including new insulation and windows, automated blinds on the western exposure and a clean-burning bioethanol insert in the fireplace.

Despite those and other modern touches, the aura of the Golden House has been restored.