A floating home on Lake Union provides everyday peace and a place to entertain. 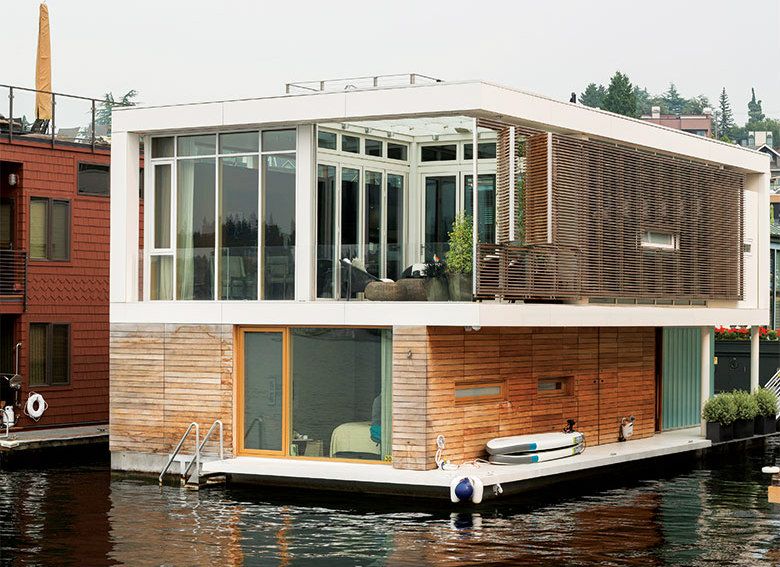 Susan Dunn owes her picturesque Eastlake home, in part, to her friends. An empty nester looking for a fresh beginning, Dunn was inspired by the idea of owning a floating home when visiting her friend Peggy, whose house is located on the next dock over from Dunn’s new residence.

Inspiration became reality when another friend, Victoria, introduced Dunn to Tim Carlander, her brother’s childhood friend and a principal of Vandeventer and Carlander Architects. Having friends involved as she launched this new chapter of her life was reassuring. “There was that second level of trust,” she says. She also appreciated Vandeventer and Carlander’s extensive experience in designing floating homes, as well as the firm’s visual aesthetic, which she describes as clean, modern and Zen—her idea of contemporary Northwest design.

When considering a location for her Northwest-inspired home, Dunn was drawn to the Eastlake floating home community, on Lake Union’s east side, which is within walking distance of restaurants, cafés and a park to walk her Goldendoodle, Bella. The location’s relationship to natural light was also important, with its west-facing orientation allowing views of dramatic sunsets, as opposed to the east-facing Portage Bay side, which enjoys views of sunrises, but grows darker earlier. With a floating home, the most important question to answer is where to position the living space, says Carlander. “Do you want to have your living space at the float level, or do you want to have it up?” For Dunn, the answer was upstairs. Being above the water line grants her privacy from heavy boat traffic cruising by without compromising water views. The top story is an open plan, with the airy living, kitchen and dining spaces flowing together, bookended by west- and east-facing decks. A powder room is tucked neatly out of the way, beside the staircase landing. Downstairs are master bedroom and bath, office, guest room, storage closet and laundry space.

Building a floating home has special requirements. In this case, the concrete float base was built off-site and then craned into the water, moved to an adjacent construction site—held to shore by ropes tied around trees—where the bones and built-ins of Dunn’s steel-structured house were constructed. The structure was then pulled along Lake Union by tugboat to its final destination. Heavy appliances, such as the refrigerator, were lifted by crane into the home, before the structure was topped off with the roof.

Living on her own meant that Dunn could have her dream home designed around her lifestyle. “Tim knew I wanted it to be especially mine,” she says. An east-facing deck on the backside of her home is bathed in morning light, making it the perfect spot for her coffee ritual. On sunny days, the west-facing deck is where she enjoys reading. Inside, a built-in TV screen in the master bathroom mirror makes it easy for her to enjoy morning television programs as she gets ready for the day and another screen in the living space allows her to watch shows from her kitchen as she cooks.

Creating a space that is inviting and big enough for parties with family and friends was also important to Dunn, something that the open kitchen and living areas, tall rift oak ceilings and folding nanoglass wall—between the living and lakeside deck space—accomplish. And with its prime vantage point for holiday festivities—a ladder leads from the east deck to a rooftop with panoramic views—Dunn’s home is a go-to gathering spot for Fourth of July fireworks at Gas Works Park, across the way, and illuminated Christmas ships that glide by in December.

With Seattle’s dark winters, Dunn says, having a home on the water with so much natural light has made the season far more bearable and less drab. “It’s my sanctuary. It’s just a peaceful, wonderful place to be.”