Floating in Luxury on Portage Bay 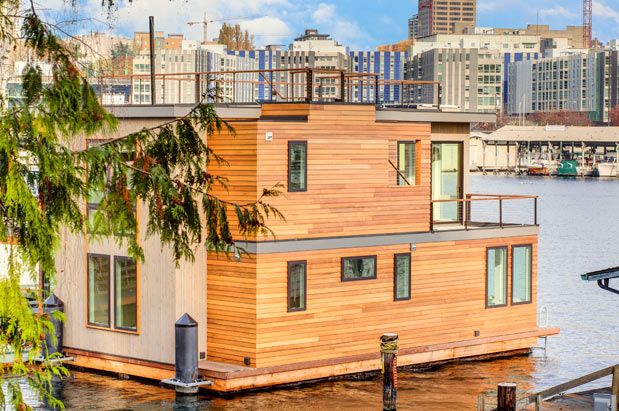 Peter Erickson knows houseboats. Founder of Northwest property development firm The Urban Fund, he has been a part of Lake Union’s historic houseboat community for more than 40 years, living with his wife and raising their two kids on a 1,400-square-foot property in Eastlake, as well as designing nine other Lake Union houseboats.

In 2013, Erickson designed and developed a Portage Bay floating home with input from Gary Timpe of construction firm BrightWork Builders. “Houseboats are a unique and precious part of Seattle’s urban fabric, and always challenging but gratifying projects,” Erickson says.

Erickson had long admired a neighbor’s houseboat that had been conceived by independent designer Eric Hogeboom. He contacted Hogeboom, and the two worked together to re-create and modify that style for the water property Erickson was developing. The floating home has a clean-lined profile that echoes the minimalist-modern look of many contemporary homes being built on land. This sleek houseboat uses two kinds of cedar siding for a clean, contemporary look; photo: Tom Marks
Timpe says that, in addition to aesthetics, weight is a primary consideration when choosing houseboat materials, so he used two kinds of cedar siding for the exterior. “The beveled siding is knot-free and was clear coated for that elegant and traditional look,” he says. “The second siding was tongue-and-groove vertical tight-knot cedar siding with a gray stain.”

Because houseboats have a higher humidity than homes on land, Timpe’s crew chose Brazilian ipe wood decking for its rot resistance and durability. “We focused the attention on the outdoors by keeping the interior clean and simple,” Timpe says. “More so than in land homes, most windows go almost to the floor, which allows occupants to see the water right up close, almost at their feet.”

The rooms were designed to create ideal vantage points. Timpe calls the view-maximizing arrangement an “upside-down floor plan,” with bedrooms on the first floor and common spaces on the expansive second floor. “The master bedroom, on the lower level, has windows to the water,” Erickson says. “There’s nothing like lying in bed watching rain on the lake or storms rolling in when you’re under the covers.” And upstairs, he adds, “The open second level has stunning, 180-degree views of the lake, bridges and the occasional UW crew team streaming by.” The “upside-down” floor plan means the common living spaces are on the second floor; photo: Tom Marks
Equally impressive, Timpe says, is the way the floor plan creates a feeling of openness while taking advantage of every square inch of space. “To achieve this, the common area on the second floor is almost all one room. The dining area, kitchen and living room are open,” he says.

The home was built on the logs of the previously existing floating home. But constructing a home on water comes with unique constraints. “The biggest challenge of building a floating home directly on the water, as opposed to building in a dry dock, is not being able to use a level,” Timpe says. “We have to rely on accurate measurements, and a large square, to ensure walls, ceilings and floors are built at right angles.”

Also an unusual hazard: dropping tools into the water. “We had a running contest to see who lost the fewest tools,” says Timpe. “In the end, we donated a few hand tools to the lake, but no power or pneumatic tools.”