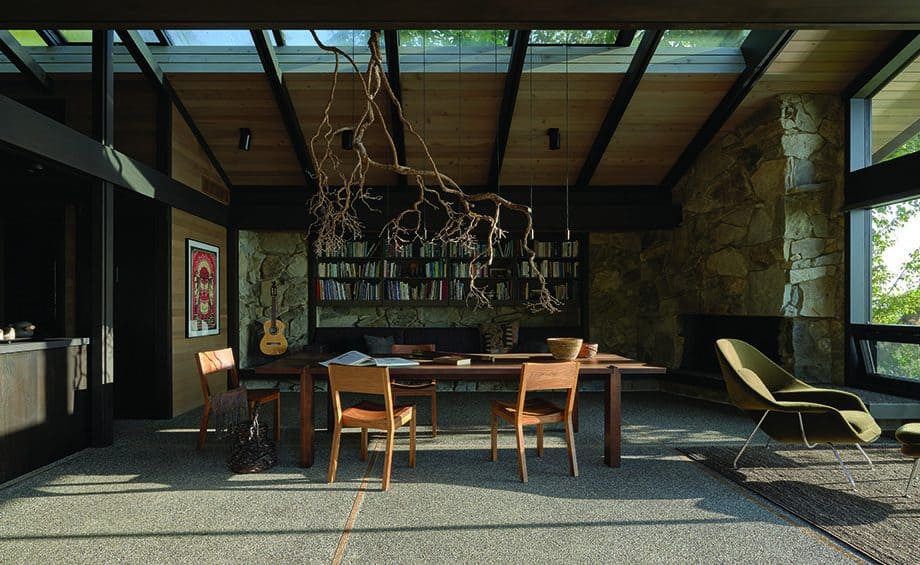 On the market for just the second time since its 1968 construction, the charming but problematic home was likely to have its actuarial ticket punched, even though it was designed by the late Hal Moldstad, whose portfolio included homes for Bill Gates and Paul Allen.

“The average life cycle of a building is 30 to 50 years before it’s scooped into a landfill,” says Brian Court, an architect with Miller Hull Partnership LLP. “It’s considered easier and more timely to start from scratch.”

Instead, an extraordinary collaboration between Miller Hull and homeowners Karen Hust and Todd Vogel resulted in what is dubbed “the world’s most sustainable remodeled home.”

“The Loom House” is one of just four homes worldwide to win 4.0 certification by the Living Building Challenge (LBC), and the lone recipient not built new from the ground up.

“We thought it would be a crime to bulldoze this house,” Vogel says. “There were so much love and labor and quality materials in the house. We wanted to honor that.”

The Loom House is so named because it weaves together people, place, community and equity, advocating change by providing a template for others to renovate their homes using resilient materials and strategies.

The couple was inspired by Miller Hull’s staff and the mission of the International Living Futures Institute (ILFI), which sponsors the Living Building Challenge. To meet the certification, buildings must generate more energy than they consume, use and treat all the water they require, and remove or salvage building materials that would otherwise end up in a landfill.

“We thought, ‘What if we didn’t just try to minimize our environmental footprint? What if we tried to create buildings that restored the environment?’ We were hooked,” Vogel says.

The finished product is something that might have appealed to Vincent van Gogh. Of his masterpiece The Loom, van Gogh wrote to his brother, Theo, “the man in the abyss, de profundis, is the miner; the other one, who looks like a dreamer, a thinker, a somnambulist even, that is the weaver.” 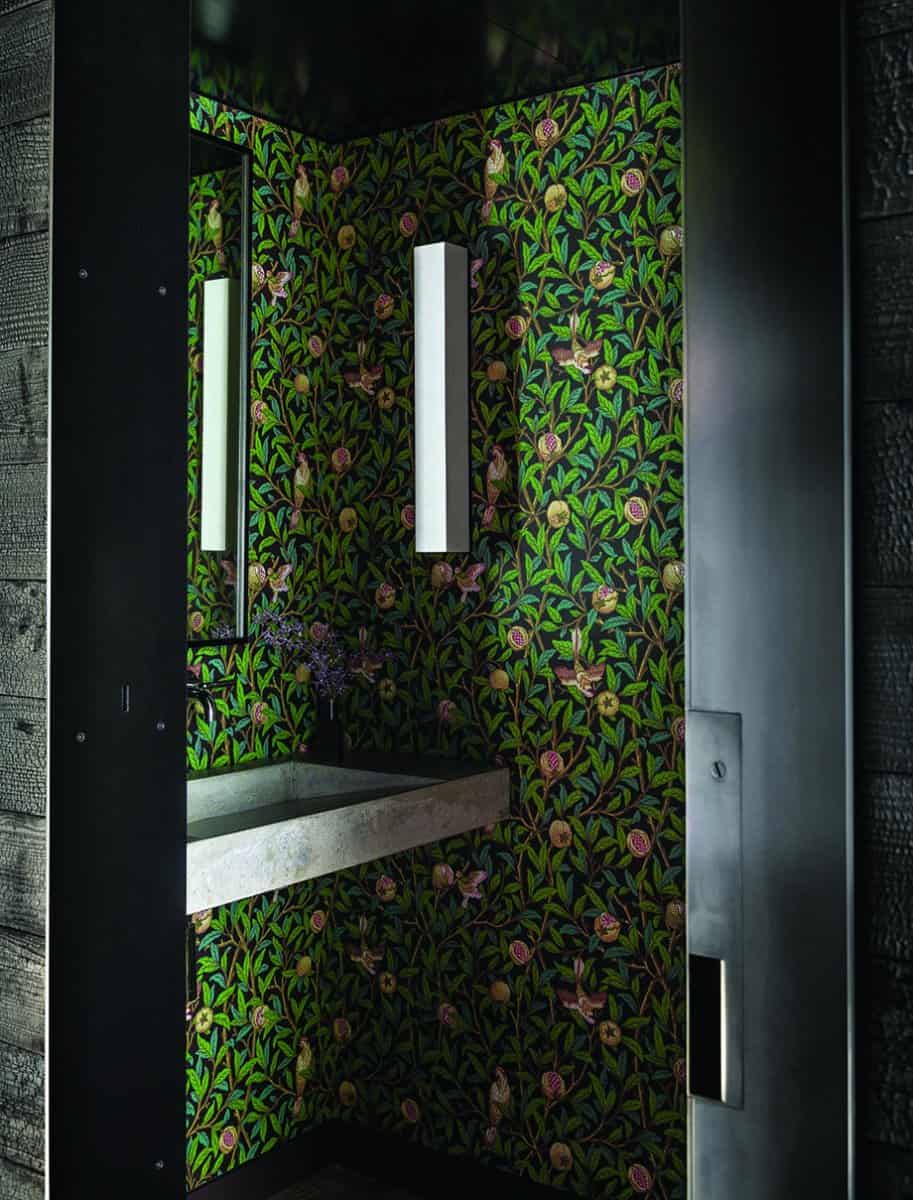 The warp and weft of this domicile were deeply tangled. It was a bit of an odd duck for Moldstad, who was noted for mid-century modernist features such as post-and-beam construction, open floor plans, vaulted ceilings, big windows and soaring stone fireplaces.

Originally designed as a home and guesthouse, the structures were eventually retrofitted for group recreation. Among other design quirks, the buildings included bunk beds divided amongst a maze of rooms to accommodate the owners’ 16 grandchildren. Garrison walls and cordoned-off areas abounded.

As was typical in the 1960s, the homes had an emission-spewing fireplace, thin exterior walls, single-pane windows and just one inch of insulation in the ceiling – in short, a carbon catastrophe. But there was plenty to love, including the yard’s mix of 200-foot-tall Douglas firs, 30-foot-tall rhododendrons, a 120-year-old cherry tree and much more.

“It felt so wild and woodsy, even though it’s a pretty small lot that’s cheek-to-cheek with other houses,” Hust says.

The first order of business was construction of a new “return to sender” shell.

The home was converted from 2×4 wall construction to 2×6, creating a greater insulation cavity. Where possible, 2x2s were tacked onto existing 2x4s to create the new walls. To preserve handsome open-beam ceilings, eight inches of insulation were added to the roof’s exterior, which had a pitch and southern orientation perfectly suited to a large solar array. New triple-glazed windows and skylights were installed.

A maximum of 5% of a remodeled home’s removed materials can go to a landfill under LBC guidelines. Effort and creativity were often required to meet that standard, including cutting up an old cement pad into pavers for use on a neighboring island.

Many materials were repurposed and used on site. When contractors began dismantling interior rooms, they were surprised – and delighted – to find rare old-growth wall studs, prized for their strength and trueness. A wisteria vine hopelessly entwined with a rotting deck was repurposed as a light fixture by Hust, a weaver and multimedia artist.

A few relics were beyond redemption. A Brady Bunch-era yellow daisy Formica bathroom counter was duly perp-walked to an undisclosed location. William Morris wallpaper is among the features in the new powder room.

“Our goal was to preserve the feel of the home, keeping as much of a light touch where we could, creating something beautiful that reflected the values of the owners — social justice and a regenerative design that not only didn’t harm the planet, but gives back,” Hellstern says.

Since the team was attempting something that had never been done, there was some initial fear of the unknown, “but everyone was gung-ho for the project,” Hellstern adds.

There were plenty of opportunities to interlace health and wellness with luxury. Outside cabinets, for example, are rich maple, a rarity in modern construction.

The water view begged for a romantic fireplace to cuddle around, but chimney emissions were out of the question. The solution was a decommissioned fireplace retrofitted with a video-synchronized, 1,000 LED array split among five panels that present a 3-D glow. Hellstern custom-designed chaise lounges to complete the glamorous surfside effect.

Under LBC guidelines, none of the contractors could use any materials on the “Red List,” or materials, chemicals and elements known to pose serious risks to humans and the environment.

Going off the electric grid was much less challenging than going off the city of Bainbridge’s water/sewer grid, but Hust and Vogel wanted their experience to serve as a viable blueprint for others. They know that extending the electrical and water/sewer grid many miles to new rural homes carries a heavy environmental price tag, and they want to be part of the solution, including cosponsoring IFLI seminars to get the word out.

“Nobody’s asking these questions,” notes Court, of Miller Hull. “We’re having a dialogue that we should have had years ago.” 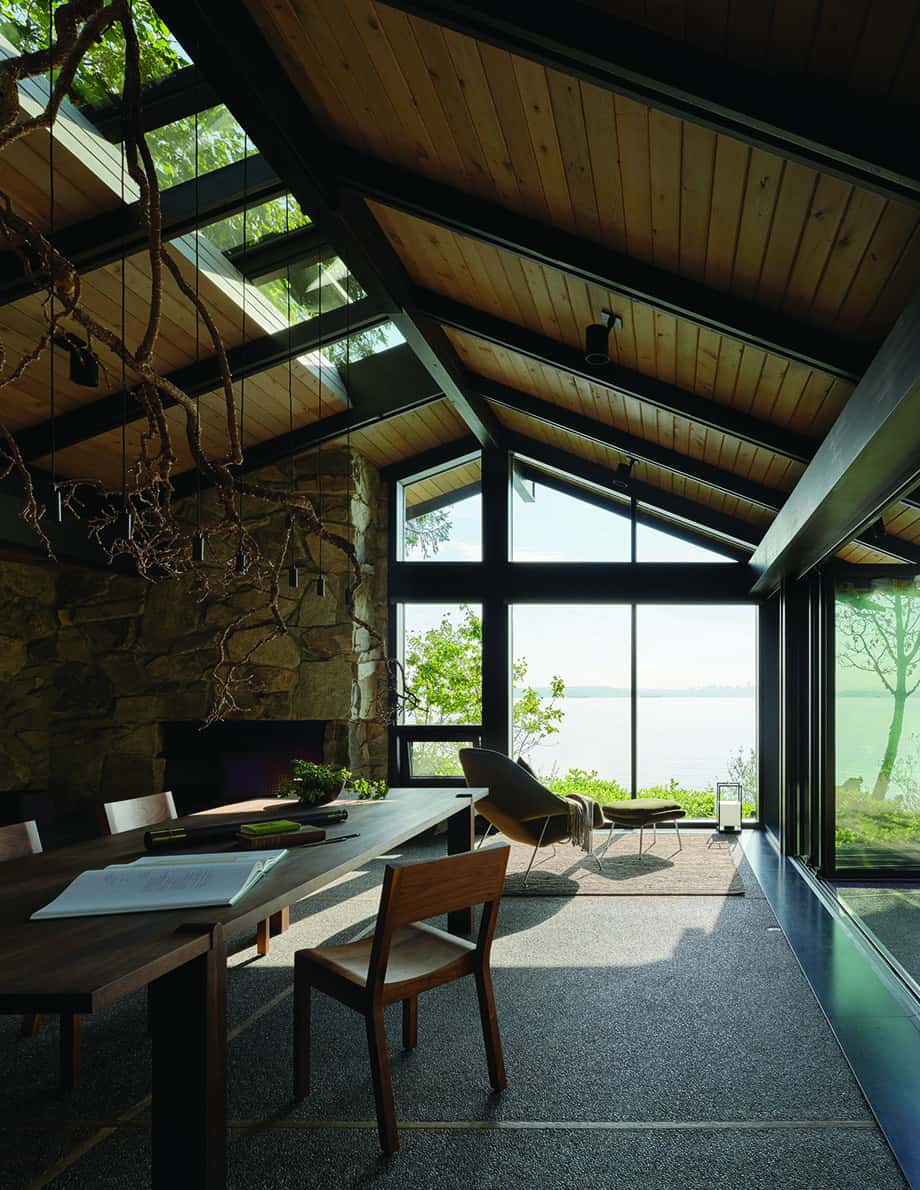 Triple-glazed windows and skylights throughout maintain a connection to the gardens and Puget Sound.

With western Washington’s abundance of rain, it’s no problem to capture enough water to properly service a conservation-minded family in most months. The regional challenge is to have enough water reserves to last through two or three historically dry summer months, especially when a productive garden is desired.

Biohabitats, a Baltimore-based company that provides conservation planning and ecological restoration, developed three water systems, including a potable system that directs roof rain runoff to an underground cistern, where it is filtered, disinfected and pressurized for all water needs in both buildings. A second system directs carport rainwater runoff to two above-ground cisterns for garden use.

The LBC requires a building’s blackwater be treated on site, so a third system collects and treats all wastewater from both houses. Outfitted with a recirculating textile filter, this system creates a high-quality effluent suitable for watering landscaping plants via drip irrigation lines.

Like many communities, the city of Bainbridge requires all buildings within its sewer service area to be connected to the sewer main. Biohabitats worked with the IFLI and others to gain an exemption, the first in the city’s history.

Three contractors worked together to move an ancient Chinese dogwood from the new carport location to a prominent spot on the two-thirds acre lot. The tree came out with a 6,000-pound root ball.

Beloved Bainbridge Island tree whisperer Olaf Ribeiro was brought in to treat some of the more ancient citizens of the homestead, which were weeping sap and overproducing seed cones, sure signs of distress. Giant syringes and poultices were among his treatments.

“You can’t cut down one tree and pretend the next one you plant makes you even,” Vogel says.

A regenerative homestead is well within the reach of many homeowners, Vogel notes. “None of these technologies are far out.”

“These were problems we wanted to learn how to solve,” Hust adds. “One of the greatest pleasures of the project was the teamwork involved.”