How to Farm Your Parking Strip 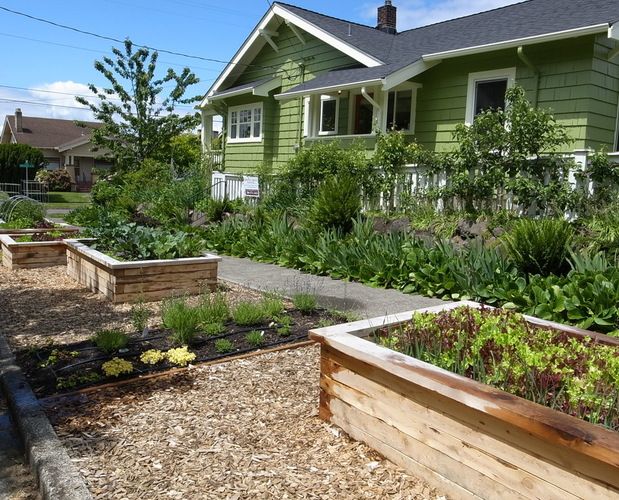 This article originally appeared on Houzz.com

Walk down the street in any Seattle neighborhood these days, and you may be more likely to see Swiss chard or lettuce growing in parking strips than grass. “All over Seattle, vegetable gardens in parking strips are popular,” landscape designer Erin Lau says. That narrow strip of land between the sidewalk and the street, often called the hell strip due to its notoriously inhospitable growing conditions, has become a favorite spot for gardeners wanting to farm their yards.

Tom Richardson already was growing edibles in his Seattle garden when he turned his attention to a 10- by 100-foot parking strip in front of his house. Other neighbors on his street had started farming their parking strips already, and he hired Lau to transform his massive plot from hell strip to edible heaven. Though hours of direct sun and nutrient-deficient soil plague many parking strips, raised beds help this one succeed.

Photo by Erin Lau Landscape Design- Seattle – Look for traditional landscape design inspiration
BEFORE AND AFTER: Lau excavated the parking strip’s lawn and replaced it with bark mulch, inground planters and six raised juniper beds. Poor soil and frequent pedestrian traffic make raised beds a better idea for parking strips. They also invite people to stop and rest and gather, something Richardson envisioned for this garden.

Garden Features
Juniper raised beds. The Richardsons live across the street from a popular park and wanted to embrace the heavy foot traffic in the design of their garden, starting with the juniper raised beds. Lau built the beds at sitting height and made the tops extra wide so they can be used as seats. Four of the beds are 4 feet by 8 feet, and two of them are 4 feet by 6 feet. The 4-by-4 timbers they used here are live edge and have a rustic feel.

Cedar is a popular material for raised beds in the Seattle area, says Lau, but it’s expensive. “We happened to use juniper timbers for the wood of the beds because it is rot resistant, bug resistant and affordable,” she says, adding that it’s about half the cost of cedar. Unfortunately juniper is not always as readily available as cedar, so it’s good to check your local lumber supply beforehand.

Lau suggests building your beds as tall as possible, both to prevent trampling and to avoid neighborhood dogs’ marking their territory on your crops.

Photo by Erin Lau Landscape Design- Seattle – Search traditional landscape design ideas
A mossy birdbath area. In addition to the six raised beds, Lau designed a bird- and people-friendly centerpiece for the garden.She added a basalt dish at the center of the garen for birds to bathe in as well as to provide water for bees and other garden pollinators. Ground coversthat stand up to foot traffic, like Irish moss and wooly thyme, surround the birdbath in an elegant ring, planted between stone pavers. The feature aligns with the Richardsons’ kitchen window and can be enjoyed equally from indoors and out.