Industrial and Green Design Collide in this Capitol Hill Loft

An old auto garage on Capitol Hill gets a new mix of uses, including one as a stylishly green loft 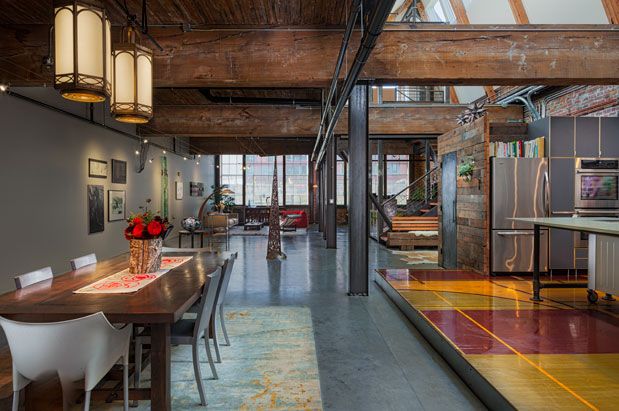 Adapting old buildings for bustling new uses on Capitol Hill is beginning to be a habit for Jim Graham, AIA, of Seattle’s Graham Baba Architects.

First, he turned a row of old auto shops on Melrose Avenue into the trendy retail/restaurant mix that is Melrose Market for preservationist and developer Liz Dunn. And now Graham has tackled the avenue’s other side, transforming a two-story 1928 auto garage into Melrose Square, an equally intriguing commercial/private mix for developer Bruno Lambert. (Dunn and Lambert acquired the properties as part of the same real estate deal.) But because Lambert’s space is owner-operated, he can push green boundaries beyond what is possible in a commercial space. “One of the big design challenges is that we wanted to show that you could preserve an old building, but on top of that make it efficient,” says Lambert, who also helps fund local clean technology startups. The new roof hosts a pleasant planter-packed patio, an array of solar panels, and views of downtown and Melrose
Market across the street

Graham more than delivered with his green urban loft concept, which sits above the celebrated restaurant Mamnoon and next to commercial office space, and all without adding a foot to the building’s skinny footprint (just 100 by 50 feet). Even one of the biggest, costliest design moves—removing an interior car ramp, originally the only means of access to the top floor, and adding a two-story staircase—comes with an efficient payoff. The stunning steel-and-salvaged-wood staircase now travels from the ground floor to the top (second) floor and culminates in an expansive, brilliant atrium roof, which, along with skylights, provides the building’s main source of daylight, natural ventilation and passive cooling. The roof’s south side holds an ambitious array of solar panels. The aim is to eventually meet 75 percent of the loft’s energy needs. Lambert, a self-confessed geek who constantly monitors how much power and water he and his partner, Michelle Gantz, use, says he plans to add a state-of-the-art water-harvesting system. A mini mudroom at the landing features a wall of old car decking studded with funky hooks that Michelle Gantz found at local shops, such as Retrofit Home, and during her many travels; Originally home to an auto repair garage, this 1928 brick building on Capitol Hill now houses the hip Middle Eastern restaurant Mamnoon on its ground floor and a beguiling loft on its top floor

Preserving the building’s distinctive facade was both a design priority and a costly but necessary efficiency. “The steel windows in the front of the building are one of the strong character-giving elements, but they don’t work,” Graham says. “They’re single-paned, they leak like sieves and they don’t satisfy current energy code. So we’ve abandoned them in place.” His design solution was simple yet inspired: Let the street view be of the charming old, swing-out, warehouse-style windows, but back them with a set of new, openable, energy-efficient windows. In the slim space between the two window sets are mechanical shades, which, unlike typical interior shades, says the architect, keep out most of sun’s heat.

In keeping with the building’s facade and old-time automotive roots, the interior hallmark of 3,800-square-foot loft is a robust industrial openness. Nary a wall obscures the view from one end to the other. There is a compelling depth to its mix of rough brickwork and bright, soaring atrium and in the crisscrossing of sturdy old wood beams with their sleek new earthquake-resistant counterparts. Most refreshingly, Graham and Lambert haven’t quelled their modern design impulses merely for the sake of old times. “It’s historic preservation because you’re preserving an old building,” Graham says, “but it’s not historic restoration.” And so they made even more out of this wide-open space by including some playful forms and spatial manipulations, such as the kitchen posed upon a platform made of a recycled gymnasium floor, and the master bedroom (complete with fresh-air intake from the roof) enclosed inside a tiny 12-by-12-foot cube. In the end, Graham says, “The bones and texture of the old building are celebrated, and the new interactions are, too.” “This space is used. We live in it,” says Bruno Lambert of the kitchen, which sits on a raised platform made from a salvaged gymnasium floor. The on-stage quality suits Lambert and Gantz, both of whom are avid cooks (“And when I cook, I’m a spectacle,” he jokes). Otherwise, the kitchen is a testament to utilitarian design: Ikea cabinetry, a sleekly simple architect-built island, overhead lights comprised of black cable and naked bulbs from Lowe’s and suspended by old belts, and ductwork serving as the stove’s ventilation hood. To keep water waste to a minimum, for his sink, Lambert requested foot pedals in lieu of faucet handles (a la a surgeon”s sink) Backing the orginal street-facing warehouse-style windows is a new set of new energy-efficient windows. In between them reside new mechanical shades, which, unlike typical interior shades, says the architect Jim Graham, actually keep out most of sun’s heat In keeping with the project’s adaptive re-use mission, many materials from the original building can be found in the new loft, be it the car-decking used to surround the pantry (the edge of which is visible on the right of the image above) or a piece of steel girder recut for a staircase guard rail. The brand new two-story staircase replaces the original car ramp that led up to the top floor, and features stair treads fashioned from the building’s old wood

This project was selected by a panel of architects for the AIA Seattle (aiaseattle.org) Home of Distinction program as an example of a smart adaptive reuse solution combining an office, a restaurant and residence within an existing urban structure.