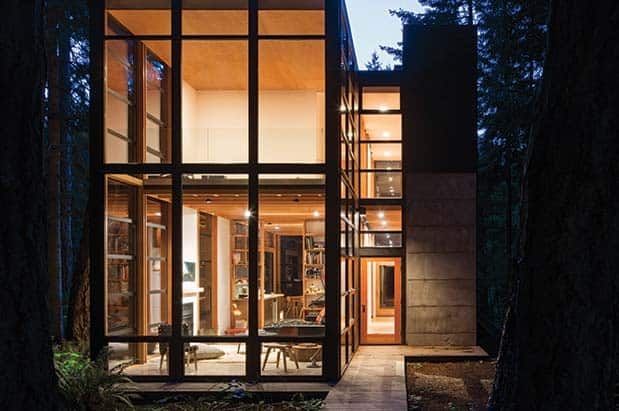 Nestled among the firs and cedars on the Whatcom County peninsula of Point Roberts sits a modest, 1,600-square-foot structure made bold with a simple, rustic design that frames the forest and gracefully captures the light of the passing day.

“This site has the uncanny and rare benefit of a sparse grove of trees on a southwest slope with tons of natural light. It creates a gorgeous cathedral of light,” says homeowner and architectural photographer Nic Lehoux. “The first thing you feel is that you are immersed in nature. This house celebrates the site.” 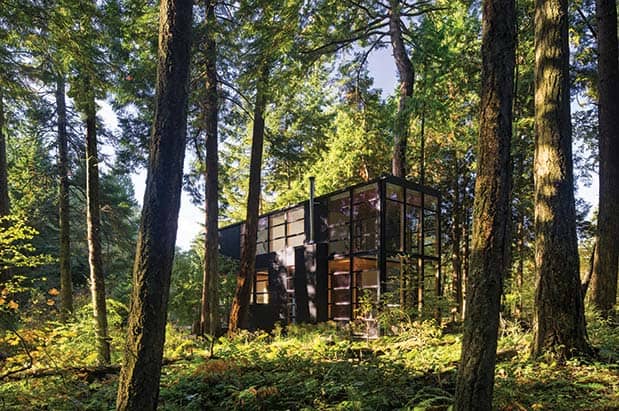 Designed by architecture firm Bohlin Cywinski Jackson, the Lightbox is built on a southwest slope, which receives tons of natural light filtered through the surrounding fir and cedar trees. PHOTO CREDIT: Nic Lehoux

Rustic Retreat
Top: Designed by architecture firm Bohlin Cywinski Jackson, the Lightbox is built on a southwest slope, which receives tons of natural light filtered through the surrounding fir and cedar trees.
Bottom: The second-story loft of the house appears to float among the forest-facing windows thanks to a glass paneled railing. The multi-purpose space serves as an occasional guest room as well as a place for Lehoux and his family to read and do yoga.

The interaction between site and structure is the quintessential expression of the long-standing relationship between Lehoux and Peter Q. Bohlin of Bohlin Cywinski Jackson (which has offices in downtown Seattle). “I started working for Peter almost 15 years ago on a house I photographed in Montana. We hit it off instantly,” says Lehoux, who travels the world photographing projects for a variety of impressive clients, including Renzo Piano Building Workshop, Morphosis Architects and Bohlin Cywinksi Jackson. “This house stems from a long, fruitful and very friend-based relationship,” he says.

When Lehoux told Bohlin he had bought a small piece of property on the peninsula, Bohlin instantly offered to design a house for Lehoux and his partner, Jacqueline Darjes. “He kind of blindsided me with that one,” says Lehoux. “I told Peter I’d be honored and thrilled if we can design a house for $200 a square foot. I wasn’t trying to give him an ultimatum, but rather express the practical reality that I had to deal with…the parameters were tight.” 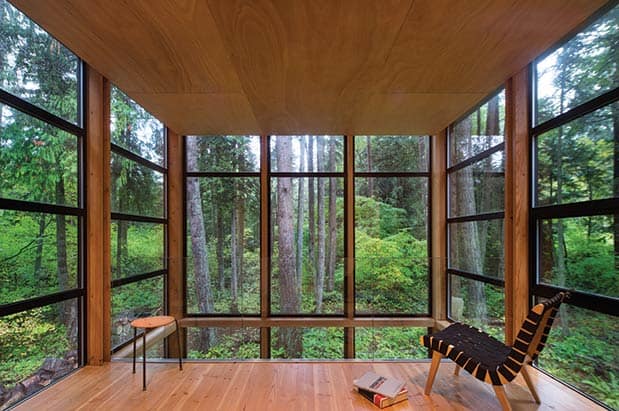 The second-story loft of the house appears to float among the forest-facing windows thanks to a glass paneled railing. The multi-purpose space serves as an occasional guest room as well as a place for Lehoux and his family to read and do yoga. PHOTO CREDIT: Nic Lehoux

In a decisive moment, over drinks, Bohlin drew a simple, elegant sketch, and a plan was hatched, with the humble path secured. “The specifics of the design are where Bohlin Cywinski Jackson principal architect Robert Miller came in,” Lehoux says. “While Peter was the initial driving force of this project, Robert was the person who made it possible. We had conversations about rural buildings and barns, we talked about our influences, the notion of restraint, all of these things became the inspiration for the design of the building.”

Two specific influences were captured in the final design: a house in Copenhagen’s Christiania commune made from recycled windows, and the classic Eames House in Los Angeles (also known as Case Study House No. 8), a landmark piece of modern architecture. 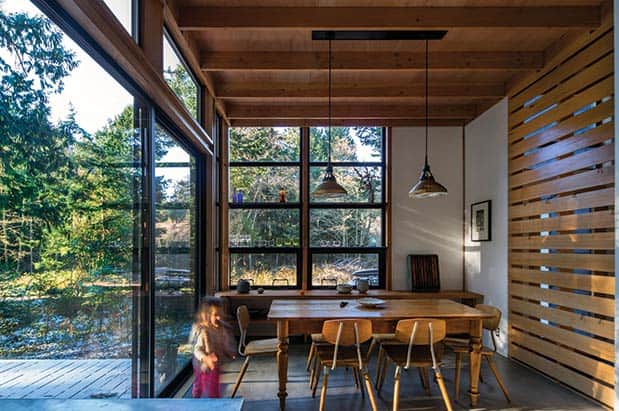 Lehoux’s 4-year-old daughter, Frida, runs through the dining room. A hemlock lattice wall (right) acts as a buffer between the dining space and entrance to the home. PHOTO CREDIT: Nic Lehoux

Both of these structures are well referenced in the Lightbox’s two-story great room, framed with wide, rectangular, forest-facing windows that are awash with light all day long. Above the great room is a small loft that seems to float over the space while visually connecting with the wall of windows to create a great sense of scale.

“It’s a sense of scale that is really cozy,” says Miller. “I think it’s a delicate balance between creating a sense of openness to visually connect to the forest and still create a comfortable and familiar place to be sheltered.”

“This place is a full-time residence when I’m not traveling from one city to the next, but we call it a retreat,” Lehoux says. “It’s a retreat that regenerates you. It really recharges the batteries. You spend a couple of days here and you’re able to confront anything.”

This rural retreat was selected by a panel of architects for the AIA Seattle (aiaseattle.org) Home of Distinction program as an example of a simple yet innovative design that provides a comfortable interior environment while allowing the beauty of the surrounding forest to be the primary focus.