A Magnolia Home Refresh Without the Construction Mess 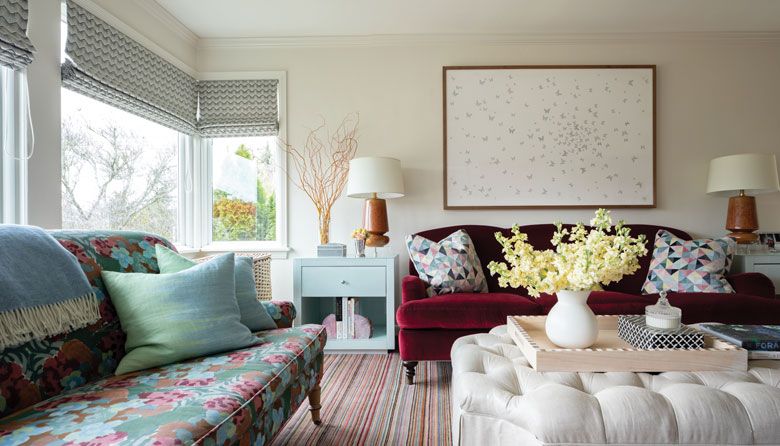 In her years spent working in commercial design and, currently, for her own residential interiors firm, Lindsay Pincus has helped hundreds of clients furnish their homes. But when it came time to refresh her own 1939 Magnolia house, she found she was her own worst customer.

“It’s so hard being your own client!” Pincus says, explaining that she came up with so many ideas on how to transform the main living space, bathroom and dining room that she had a terrible time settling on the final vision: a colorful, contemporary space that is equal parts luxurious and playful. PATTERN PURSUIT: The playful palette for the revamped dining room was based on the tartan Pincus used on back of the dining room chairs

Pincus and her husband initially planned a major remodel of the home. It would have included adding 400 square feet to the 2,000-square-foot home, most of that footage dedicated to a master suite for Pincus and her husband. Plans were already drawn up and in place. But at the eleventh hour, they pulled the plug on the project; Pincus was pregnant with their second son, and she decided living in a construction zone with a baby was more than she could handle. The cost—both financially and emotionally—just didn’t tally. From top: The bathroom was given an entirely new look with the addition of a fun printed wallpaper; storage solutions like this lovely credenza keep kids’ toys (and other clutter) out of sight

Instead of that major overhaul, Pincus decided she would invest in quality, custom furnishings to give the living and dining rooms an entirely different look and feel. In the living room, that meant sourcing a custom ottoman—inspired by one she encountered at the eccentric Soho House Berlin hotel years ago and simply couldn’t get out of her head—and having it draped in shimmery linen. She had the rug, a 10-by-14-foot striped piece with 39 different colors, made in Nepal. (That was an ordeal, taking almost a year to procure the carpet.) In the dining room, the tartan print she used for the backs of the upholstered chairs set the tone—masculine in form, but feminine in color—and the palette for the rest of the room. With a fresh coat of paint, custom window treatments and luxe furnishings, she made the space her own. Like color and quality, art plays a major role in all of Pincus’ projects, including her own. She chose a couple of large-scale pieces she loved and also felt fit the space. After all, the designer says, this project—hard as it was—gave her the opportunity to express herself more than she could with a client. 1. Invest in the present.
Quality pieces that last are worth the extra cost, she says. Don’t forgo something you love because you think you’ll get rid of it in five years. If you have quality pieces, you can have them reupholstered years later when your style (or current trends) change.

2 Embrace wallpaper.
“People are afraid of it, but it makes the whole space warmer,” she says. If color and pattern aren’t your thing, go with something monochromatic but textural.

3 Swap out your hardware.
This is especially worthwhile in the kitchen. Simply replacing knobs and handles on cabinets is surprisingly refreshing. “Plus, it’s five months and 29 days faster than a full six-month kitchen reno!” Pincus says, referring to the typical time frame for a kitchen remodel.

4 Make the space yours—even with kids.
Without dedicated play spaces, for which many older Seattle homes don’t have room, parents are left living in a mess of plastic toys and art projects. But it doesn’t have to be that way: Pincus says if you buy beautiful storage pieces with closing doors—shelving units and chests, for example—you can tuck toys away to create a grown-up space to enjoy after bedtime. In her house, Pincus says, she and her husband turn down the lights (“I love dimmers!”), put away all the toys, after which the living room becomes “way more relaxing—it has a totally different vibe.”