Now, This is How You Build a Waterfront Patio

The whole gang can revel in the great outdoors at this Orcas Island sanctuary. 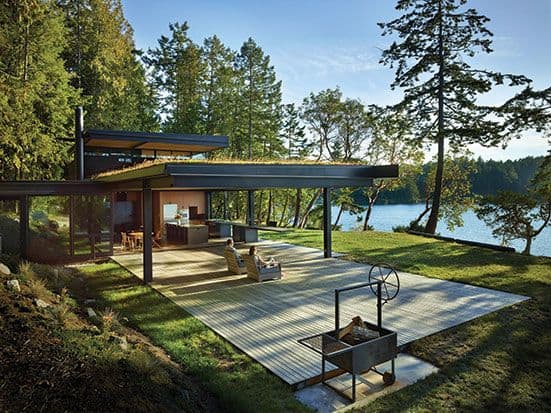 Days at this 1,700-square-foot waterfront vacation home on Orcas Island are a frenzy of activities: fishing off the dock, swimming, boating, bird-watching, cooking, drinking wine and sometimes even dancing. It’s a gathering place for the Seattle-based homeowner’s clan of 20—including kids and grandkids, friends and a few pooches, to boot—and was designed by famed Pioneer Square–based architecture firm Olson Kundig to be a year-round retreat that embraces the surrounding forest and rocky shoreline.

The home’s 9-foot-tall glass walls, off the living and kitchen spaces, open via a hand-cranked wheel, merging indoor rooms with the outdoor deck. The kitchen, with a Caesarstone counter that extends over the ipe wood deck, is homeowner Janet’s (who only wanted her first name used) favorite feature. “Almost all who arrive take part in the cooking after we have totally opened up the house,” Janet says. “The [children] play outside and guests gather in a circle on the landscape and drink wine and tell tales.”

Photographs by Benjamin Woosley
From left to right: The 9-foot-tall windows let occupants take in spectacular sunsets; a cantilevered Caesarstone countertop extends from the kitchen over the ipe wood deck, blurring the line between indoors and outdoors; an outdoor shower is tucked into the hillside of the home’s perimeter

An outdoor shower, constructed of ipe wood and concrete with painted steel supports, is intentionally tucked near rocks on the property’s perimeter so it gives the sense of being part of the landscape. Swimmers can rinse off (and warm up if it’s cold) here before returning to the house. Charred cedar siding, created through the traditional Japanese technique of shou sugi ban—which helps to preserve the wood—lends a dark hue with a subtle silver finish to the home’s exterior. It’s mixed with dark steel touches that contrast with the light pine wood interior, chosen, according to firm owner and design principal Tom Kundig, to balance the dark, overcast skies that are common in the Pacific Northwest.

“This house was a gift from a mother to her many kids and grandkids,” Kundig says. “We’re seeing this more and more: to create a communal space for an extended family where everyone can be engaged.”