An Open and Airy Backyard Cottage 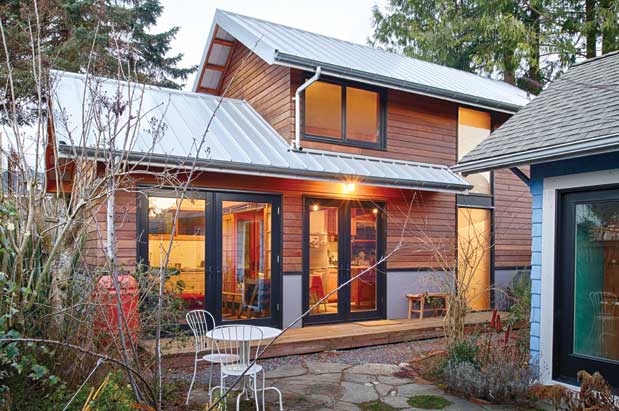 This article originally appeared in the November 2014 issue of Seattle Magazine.

Developers have been drooling over Kate Lichtenstein’s property.  Located in a neighborhood filled with small houses, many of which are being torn down, the lot includes her beloved one-story, one-bedroom 1920s bungalow and until recently, a small, dilapidated shed in the backyard. “I get letters all the time from developers wanting to buy it,” she says, “but I think it’s such a unique property and I plan to hold on to it.”

As a part-time musician, Lichtenstein a was toying with the idea of replacing the shed with a slightly bigger studio when events conspired in 2010 that allowed her to set her sights on something grander. Not only was Seattle’s new backyard cottage ordinance passed (legalizing the construction of accessory dwelling units, ADUs, in the backyards of single-family-zoned lots), but a friend had just told her about a local architect, Tim Hammer of Cast Architecture. Hammer, an early backer of Seattle’s cottage movement, is known for designing clever small spaces. “It’s always been a core interest,” Hammer says. “My first home was a 550-square-foot fisherman’s shack in Ballard, and I spent 18 months in Kobe, Japan, studying high-density housing. The craft of small space design is: How do you make it feel open, comfortable and airy, and not claustrophobic?” 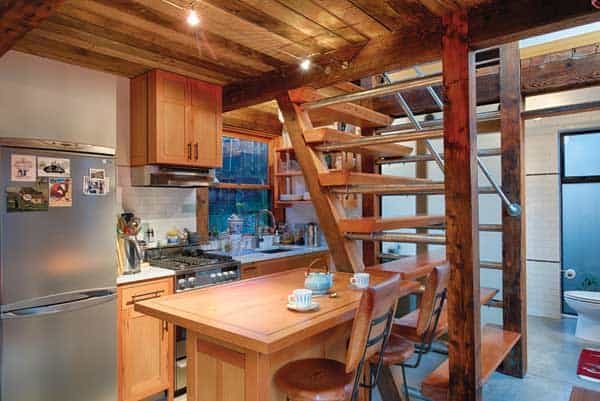 The kitchen is awash in salvaged fir, from the roughly finished ceiling made of car decking to stair treads reclaimed from Ballard’s Sunset Bowl to the custom cabinetry

Hammer’s 550-square-foot answer to that design query, completed last year, sits in Lichtenstein’s backyard. The two-story, rustically modern cottage, which seems far bigger than its measurements, comes with creature comforts that include a loft bedroom, full kitchen and bathroom and green-design bells and whistles. With its long-lasting metal roof, LED lighting, superefficient boiler heater, low-VOC paints and caulks and radiant floors of fly-ash concrete (a by-product of burning coal for energy), the cottage was built following 5-star Built Green requirements.

“The exterior envelope is a combination of 2 inches of rigid insulation with wall cavities filled with an additional 5 and a half inches of cotton insulation from recycled blue jeans,” Hammer says. “The spec on it, in terms of being sustainable, is beyond most projects that I’ve ever worked on, and that was really driven by the client.”

Lichtenstein, who works for Sound Transit and has a background in sustainable design (she’s project manager for the University District’s new light-rail station), used recycled materials such as the resplendent reclaimed fir used for its beams, posts and stairs, and the Craigslist claw-foot tub in the bathroom. “I really love the picture of modern design that incorporates salvaged materials,” she says. “It’s also fun to find really simple solutions for things.” For example, discovering a new use for galvanized electrical conduit. “It’s supercheap, like $1.65 for a long section,” she says, “and I thought that was a great material to form the loft’s railing.” 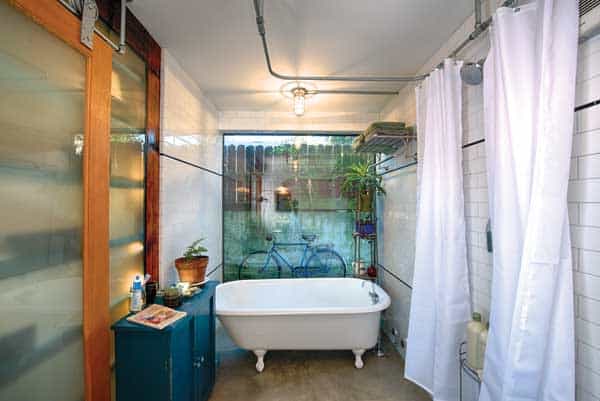 The bathroom is one of this cottage owner’s favorite spots. “It’s really open and bright,” Lichtenstein says, “I love the raw concrete, all the imperfections. I think it’s just beautiful.” Lichtenstein found the claw-foot tub on Craigslist and had it refinished. The shower curtain track is another version of the cheap electrical conduit tubing featured in the loft bedroom’s railing

“I’m really happy I did it,” Lichtenstein says of the project. “I’m not against redevelopment, but this was a way to redevelop in a different way.” While enabling her to preserve the main house, the cottage offers untold flexibility, including the option of serving as a rental unit.

Or it can serve as the studio she originally imagined. Lichtenstein is part of an old-timey music trio, The Barn Owls (barnowlsmusic.com), that performs at local bars, including Conor Byrne Pub, and square dances. Says Lichtenstein with a laugh, “The cottage is a good place to get away to when you’re learning some screechy fiddle tune.”