This Prefab Kitsap County Home Went From Sterile to Stylish

The Emerald Studio warms up one family’s formerly austere home. 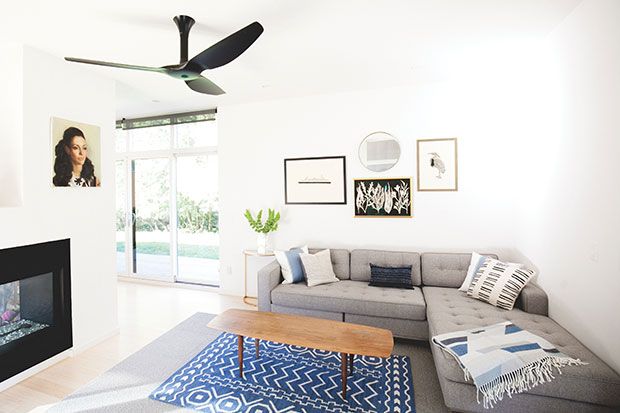 Chris Roy and Amy Staupe’s house-hunting tale began with a life-changing trip. In this case, it was the natural beauty of New Zealand that clarified the former Los Angeles residents’ need to make a change. “We came back yearning for more nature, more water, some cooler weather and fewer people,” says Staupe, who also wanted to start a family in a place where she could re-create the magic of her own childhood: a space that encourages hours of playing outdoors, unhindered by constant adult supervision. Roy, who has a pilot’s license, kept an eye out for available airfield property, and that’s how the couple discovered four wooded acres in Olalla in Kitsap County—the setting of their prefab home.

When the move was complete, however, Roy and Staupe didn’t feel as though their home’s interior reflected the space they wanted. “The design of the house was inspired by a Scandinavian modern aesthetic, but we found our own ‘decorating’ made it all seem a bit sterile and austere,” says Staupe. Enter The Emerald Studio (Pioneer Square, 95 Yesler Way; 206.251.0105), started in 2014 by Cassandra LaValle (the designer behind the fantasy-inducing, popular design site Coco+Kelley) with lead designer Sara Knowles.

“One of the things we loved about this home is that it was so unexpected,” says LaValle, who, along with Knowles, took on the challenge of shifting the home from cold to cozy. “The juxtaposition of the wild, natural surroundings with this totally fresh and modern architecture really inspired us to keep things more minimal than we usually would.” Photograph by Meghan Klein
The designers hardly touched the dining space, connected to the living room with a fireplace, as they already admired owners Roy & Staupe’s wood table and assorted chairs

The living and dining area was of particular importance to the couple. “Since family life was the plan from the start, we really wanted the living and dining area to be open and informal, yet put-together and thoughtful,” says Staupe. They replaced a sofa with a larger sectional from the now-closed Area 51. “It’s a great, comfortable gathering space for reading stories, playing games and occasionally hosting a pillow fight,” says Staupe. Another challenge was finding a media console to replace a secondhand dresser that didn’t feel quite right in the space. “It had to be the right size, hold the right amount of items, and suit the aesthetic of the couple and our vision for the room,” says LaValle. “We eventually had a custom piece made by Stor.”

Adding art helped elevate the space and bring in the couple’s personality. The designers filled the walls with work from Seattle painter and printmaker Jennifer Ament, which gives a nod to the beautiful outdoor surroundings of the home. An impressive mirror from Schoolhouse Electric Supply Co. (Portland, 2181 NW Nicolai St.; 503.230.7113) is another distinctive touch.

LaValle and Knowles also worked to incorporate existing standout elements, such as a corner teepee (great for toy storage and easy cleanup) from Marlowe and Jay—a friend’s Etsy shop (Etsy, “marlowandjay”) —and a vintage coffee table. Each detail contributes to the room’s separate identity, yet all the areas are tied together through the designers’ color recommendations. For example, a layered blue rug from One Kings Lane helps link the pops of blue used throughout the home. Photograph by Meghan Klein
A corner teepee provides a nook for play and storage for the couple’s kids, Maisie and Felix

Although Roy and Staupe initially were intimidated by the idea of hiring interior designers, the end result was worth it: “[Emerald Studio] really just helped to think of those little things that tie everything together. They made our house look warm and styled, but still functional and unfussy,” says Staupe. The outcome is an enjoyable space for kids and grown-ups alike.