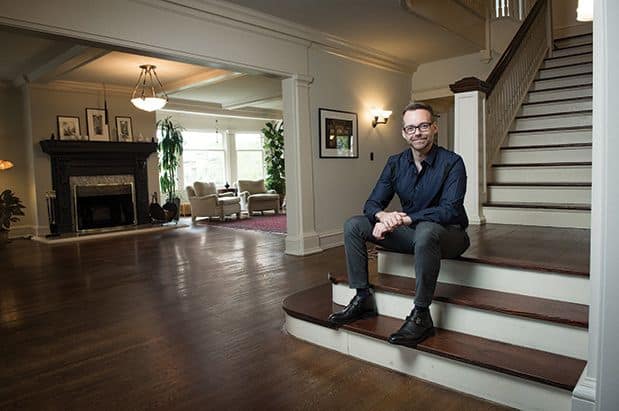 With its gleaming white columns and a stately portico often seen decked in red, white and blue bunting, the “White House,” an almost 7,000-square-foot mansion perched atop North Capitol Hill, prompts more than a casual comparison to our nation’s “other” executive address. But the resident in chief of this house is the indefatigable Roger Nyhus. Owner of Nyhus Communications, a 20-year-old, politically hardwired, strategic communications firm with offices in Seattle and Washington, D.C., Nyhus has turned his 1906 mansion into quite the political powerhouse.

In the nine years that Nyhus has owned it, the house has hosted some 200 events that have raised approximately $1 million for various progressive causes, nonprofit organizations and candidates. “It has become a venue for important conversations about critical issues,” says Nyhus, who has feted, consulted and raised funds for VIPs stretching from one Washington to the other, be it Governor Jay Inslee or the British ambassador to the U.S. “My life has changed dramatically since buying this house,” he says.

In a strange way, though, the house has been a part of Nyhus’ life before he ever dreamed of living in it. “I went to the University of Washington for two years,” he explains, “and we used to hang out at Volunteer Park, watch the sunset and go by this house…. I remember it was very stately, but I had never been inside.” Flash forward to the summer of 2007 and a house-viewing lark turned into one of those “meant to be” real estate stories.

Nyhus just happened to bring along Jamie Pedersen, 43rd District state senator and a longtime friend, on the initial walk-through. “I remember pretty vividly the first time that we went over there,” says Pedersen. “It was after the annual Lambda Legal party…and we talked from the beginning about how perfect this house would be for fundraising for various organizations.” (Just one year later, Pedersen’s reelection campaign kicked off at that same address.) Nyhus made a half-serious lowball offer that arrived just as the subprime market buckled, sealing the property deal and setting him on his powerhouse-building course. 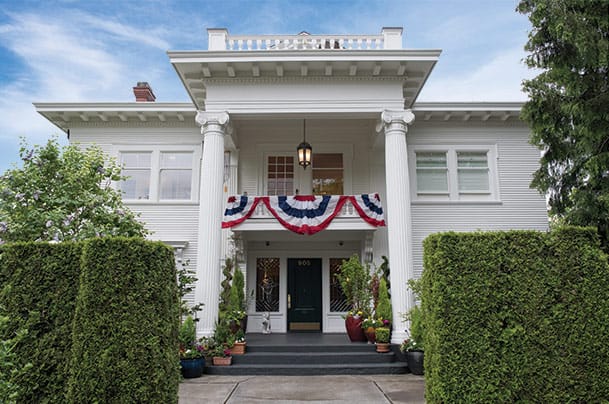 However, realizing Nyhus’ vision of a public/private civic space in the city has not been easy (or cheap). He jokes, “I call it the pine-box house because I have invested blood, sweat and tears into it, and I will be going out [of it] in a pine box.” Nyhus called on architect Kim Clements, cofounder of design build firm JAS Design Build, to draw up the multi-phased master plan, which would tastefully blend modern, multipurpose practicality with the home’s neo-Classical/Beaux Arts craftsmanship.

Ironically, one of the most significant design choices involved doing nothing. “I wanted to change the stairs completely, and Roger kept fighting me on it,” recalls Clements. “He said, ‘You don’t understand how the stairs get used.’” Then she attended one of Nyhus’ events. “That’s when I understood what a plenum those stairs are,” she says. “If the speaker is standing in the living room by the fireplace, people will pack up along the stairs to listen.” 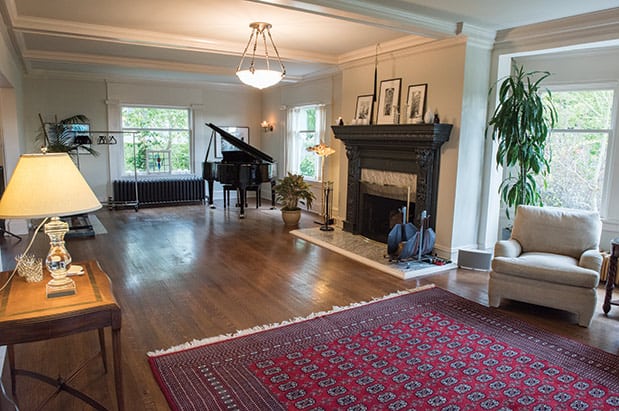 Nyhus’ grand living room has hosted countless VIPs from Mayor Ed Murray to the British ambassador to the U.S.

The house Clements was creating also demanded a more private purpose, evident in Nyhus’ elegantly encapsulated residence on the top floor, which includes a master bedroom, en suite bathroom and a hidden room behind the bookcase. “He really wanted a secret room,” says Clements with a laugh. “As I look back, I think it makes total sense. Part of wanting a space that was really 100 percent private is because so much of his life is public…I think, psychologically, it’s important for him to have that.”

For Nyhus, managing personal, political and business interests is a constant balancing act. He’s worked with high-profile clients like Alaska Airlines as well as controversial energy product clients. “In my personal political life, I support Democratic causes, but in my business world, we work with a lot of different folks,” he says, “and in my business world, I reach across the aisle.”

At home, the White House has already attracted a political who’s who, from U.S. Senator Patty Murray to Mayor Ed Murray (his first mayoral fundraiser was there) to Hillary Clinton campaign manager Robby Mook. In August, the state’s entire Democratic House delegation is expected to show up for a “New Dems” soiree. Nyhus also puts on a regular “CEO Salon” series and ensures that a plethora of nonprofits, from local arts and parks to global health initiatives, benefit from White House events. For example, the South Lake Union–based, globally focused PATH organization. “It’s a great gathering spot,” says PATH CEO Steve Davis. He compares the house to D.C.’s famous social circuit. “There’s usually a dinner at a very elegant home in Georgetown with a mix-and-match of people. The conversations are quite interesting because you’re sitting next to somebody who’s an ambassador from X, as well as some congressman, or some scientist working at the NIH. Roger’s house has that same feel.” 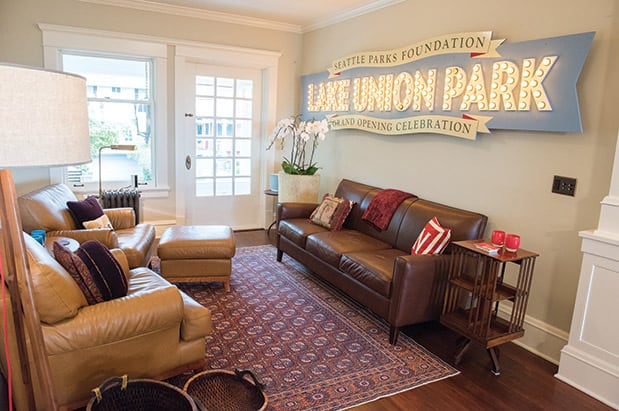 The Lake Union Park sign, a gift for Nyhus’  work with the Seattle Parks Foundation, illuminates the sitting room outside his private space upstairs

All of it is worlds away from Nyhus’ start in the Washington coastal town of Westport. “I’m the product of a small town upbringing in a blue collar family,” says Nyhus. “My dad was a fisherman, my mom was a court clerk, so those small town values definitely translate into the work I do. I feel very humble to live here, and what I focus on is using the house as a tool for good.”

One thing’s for certain: When important (or soon-to-be important) Democratic flesh needs pressing or campaigns require launching, it probably will happen at Nyhus’ White House.