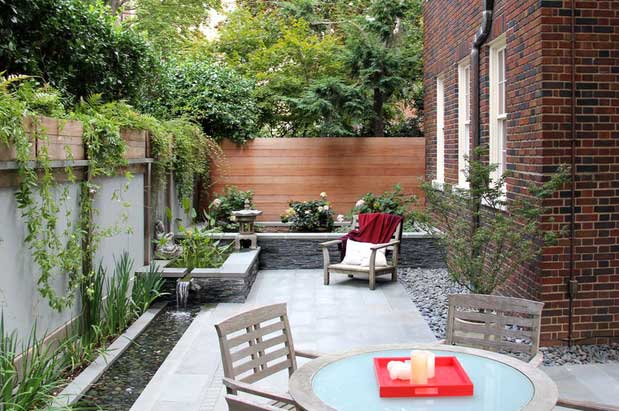 A patio can be more than a concrete slab, as these six transformations show. From a geometric brick paving pattern that alludes to a homeowner’s vision for a labyrinth, to bluestone pavers intermixed with gravel to spread the budget further, these patios previously featured on Houzz inspire stylish outdoor living and solve distinct landscape challenges.

BEFORE: The existing patio behind this Washington, D.C., home already featured bluestone paving and a water feature, but the water fountain splashed everywhere and the natural cleft bluestone was laid in a loose pattern that made the patio appear smaller. Additionally, the homeowner’s beloved black Lab trampled anything planted at ground level.

The homeowner asked landscape architect Jennifer Horn for an attractive, modern garden space inspired by his travels to Asia where he could entertain and also keep his dog.

AFTER: Horn re-envisioned the patio with the homeowner’s requests as her jumping-off point. While bluestone paving still covers the patio floor, the thermal finish and running bond pattern make it feel more cohesive and organized — and also feel good on dog paws. The new water feature runs the patio’s length, slowly recirculating water in a gentle rhythm.

Aquatic plants like water lilies and lotuses grow in the fountain, which also acts a bit like a moat, protecting plants next to the repainted stucco fence from the dog. Vines, including passionflower and trailing forsythia, and ferns dangle from wood planters down into the side yard.

A new ipe fence along the patio’s far wall provides a clean, bright backdrop and also shields the side garden from the street.

BEFORE: A family in Washington, D.C.’s, Cathedral Heights neighborhood already had an expansive backyard, including a patio between their house and detached garage, but its slope and poor space-planning didn’t make it all that usable or inviting.

AFTER: The homeowners worked with landscape architect Mark White, who graded the backyard into two flat, usable levels. He expanded the patio next to the house, adding a fireplace, an elegant seat wall and new perimeter landscaping.

A new patio features a crisscrossing paving pattern of brick and bluestone, anchoring the space and contrasting the light-colored patio furniture and fireplace.

The fireplace was designed as a focal point, built in between two garage windows and along the new raised planter. (You can see plants to the sides if you look closely.) The fireplace surround pops against the gray stone of the chimney, tying in with the house and garage.

The mostly evergreen plants frame the space, creating a green backdrop for outdoor dining and lounging.

BEFORE: An unused concrete parking spot in the backyard of a couple’s first-floor home in San Francisco’s Mission District was the perfect opportunity for a new outdoor living space, especially since they already had underground parking.

AFTER: Landscape designer Beth Mullins worked a near garden miracle, transforming the cracked concrete pad into a lush back patio with a new upper-level ipe deck. With the two distinct areas she created, the space appears larger and less sunken. The raised deck also allowed Mullins to avoid demolishing the existing concrete underneath.

Built-in planters filled with Bay Area-friendly succulents, grasses and other low-water plants frame the deck and also function as a guardrail.

Poured-in-place concrete pavers form a solid base for outdoor dining and entertaining, and the couple’s young daughter enjoys playing hopscotch on them. Dwarf mondo grass (Ophiopogon japonicus ‘Nana’, USDA zones 6 to 11), a slow-growing, clumping grasslike perennial, grows in between the pavers. It is easy to grow, doesn’t require too much soil and can handle foot traffic.

Related: Open Up Your Deck With a Paved Path

BEFORE: The owners of this traditional Seattle townhouse had an outdoor deck, but the scale didn’t feel right in the compact backyard, and the deck didn’t have the contemporary industrial style they liked. Additionally, to reach the deck’s stairs to the lower part of the garden, visitors had to cut through any activity or gathering happening on the deck.

AFTER: Landscape architect Mark S. Garff maintained the existing deck, but he removed the railings and moved the staircase closer to the house, opening up the deck to the rest of the yard and rerouting the circulation to the edge of the deck.

New extra-wide steps framed with steel lead down to the new patio, a combination of bluestone pavers and gravel. By spacing out the pavers and filling in the gaps with gravel, Garff created a permeable patio that also made the more expensive bluestone go further.

Built-in cedar planters hold perennial flowers and edible plants, and also function as a railing, a barrier and extra seating.