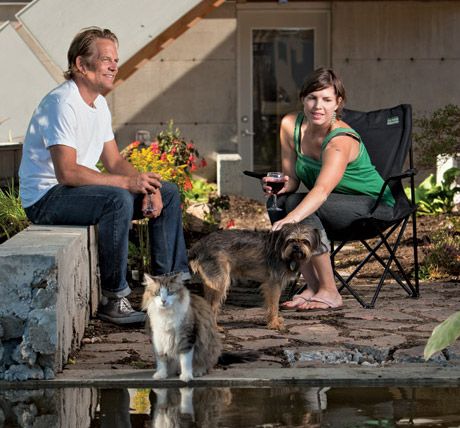 The 1,750-square-foot house architect Robert Humble designed for himself and his wife is entirely nontraditional for Seattle.

It’s modern, flat-roofed and boxy, and was prefabricated off-site and delivered by truck in sections to the skinny, empty lot owned by Humble and his wife, Nicole. But that doesn’t mean the owner hasn’t tried to integrate it into his Jackson Place neighborhood.

Humble tucked a garage under the living room, and added a welcoming front porch.

“We’re doing the typical architectural diagram of a traditional Seattle house, but stripped of extraneous materials,” he says. In other words, the modules have been arranged in the general shape of a bungalow, but they’re left unembellished by trim or a pointy roof. Many of the home’s environmental features—such as super-energy-efficient windows and appliances, a heat pump and recycled bathroom tiles—look just like standard models.

But there was one unusual feature Humble refused to make look nice: three enormous rain barrels, strapping as nightclub bouncers.

“A neighbor said, ‘Oh my god, what are those on the side of the house? Are you going to hide them?’” recalls Humble. His answer was no. “Frankly, we go out of the way to make that a feature,” he says. “I want someone to run by and say, ‘What’s that?’”

Those 1,500-gallon tanks advertise his belief that saving water is important, even in seemingly rain-soaked Seattle. Diverting rainwater is also good for the environment, because it keeps that rain from picking up pollutants and carrying them to lakes and Puget Sound.

And it’s not only an environmental choice. Water is getting more expensive. This summer, Seattle Public Utilities proposed a 25 percent increase in the water rate by 2014.

The tanks capture rainwater falling on the property, which is then used for watering the landscape and flushing toilets. Rainwater should fill those needs for all months but September, when the family temporarily taps into city water.

The couple also installed one of the first legally permitted graywater systems in Washington state, which takes in water from the washing machine, sinks and showers. The used water is piped to three capped filtering ponds in the backyard, where it seeps via gravity through each pond’s layers of stone, gravel and sand until it is clean enough to be used on the landscape. (It’s quite a change for the site, which, when the family bought it, was paved end to end in concrete.)

The house is also built to evolve along with its occupants. (“Moving is wasteful and expensive,” Humble says.) The house features conduits that will connect to future roof-mounted solar panels, and solar hot water is pre-plumbed; the Humbles plan to add both green features when they can afford them.

One of the bedrooms is a “flex space” that can be divided in two, for possible future children, and behind the garage is a mother-in-law apartment that can be a rental or used by family.

“We’re not wealthy,” says Humble. “Nicole’s a nurse, and I’m an architect. We can still live green.”

What you can do:

Quick fix: Take shorter showers and turn off the water when you brush your teeth.

Weekend Project: Find and fix water leaks around your house, or hire someone to do it for you. Check out the videos at the Saving Water Partnership.

Long term: Most rain barrels don’t collect enough water to be useful in summer when you really need them. Go for a cistern, which can hold 200–1,000 gallons of water or more. Rebates are sometimes available. Visit seattle.gov and search “rainwise.”

Read about another eco-friendly home, featured in our story for boasting a New Low of Toxicity Levels.