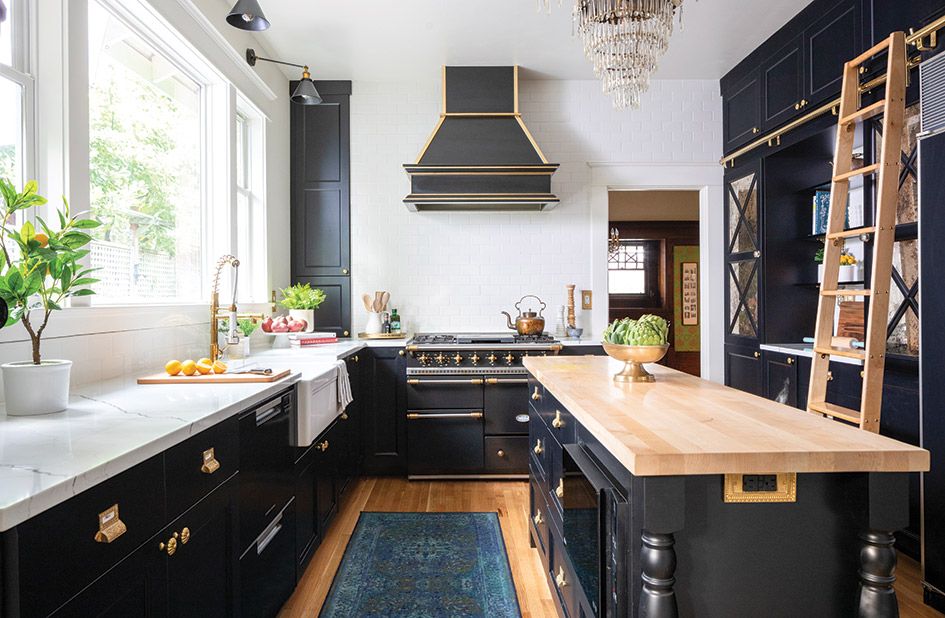 When historical fiction author Jennie Spohr decided to remodel her kitchen of six years, she wasn’t interested in embracing the style du jour—all white paint and subway tiles and open floor plans. She very much wanted her 1908 Montlake house to look its age, but with modern functionality.

Though Spohr has an eye for aesthetics—as evidenced by the creative use of color, pattern and vintage furnishings throughout the house she shares with her husband and two kids—she sought expertise from principal designer Jennifer Gardner of Jennifer Gardner Design to help her vision to materialize. The inspiration behind the vision: the marble and unlacquered brass of King Street Station, constructed in the Chinatown–International District around the same time as the home.

The two women didn’t shy away from ornate art deco touches in the primarily black-and-white space. One of the home’s original chandeliers was repurposed and hung over the narrow island, which was built to increase storage and surface area for cooking and entertaining; brass detailing abounds, from antique drawer pulls to custom-painted trim on the hood over the French-built Lacanche range; antiqued mirrors were installed on the pantry cabinet doors. General contractor Matt Walters widened the window to let in more light, as the original kitchen “was a sad, haunted hole,” Spohr says. But the pièce de résistance is a nearly 8-foot-tall library ladder, something that the petite author insisted upon, for both its charming look and the easy access it provides to the shelves, which reach the full height of the lofty room.

Reimagining the powder room just off the kitchen was always part of the remodeling plans, but Spohr decided against a matching black-and-white palette. Instead, she went as bright as possible with a vintage brass swan faucet, dragon-print wallpaper, a gold-painted ceiling and a turquoise Cyan Design chandelier that looks as if it’s made of pulled taffy.

“I wanted to create a bold, fun, inviting, energetic space for Jennie, because that’s her personality,” Gardner says. “She works from home and she wanted to be inspired by her space on a daily basis.”

While the vibrant accents may reflect her character, Spohr says what really inspires her is history. “I feel the need to preserve something that’s been around 100 years….My role is very much the caretaker of this house.” Where the kitchen revels in black and white, with unlacquered brass detailing, the powder room is a study in bright color and whimsical pattern