An Urban Oasis in Phinney Ridge 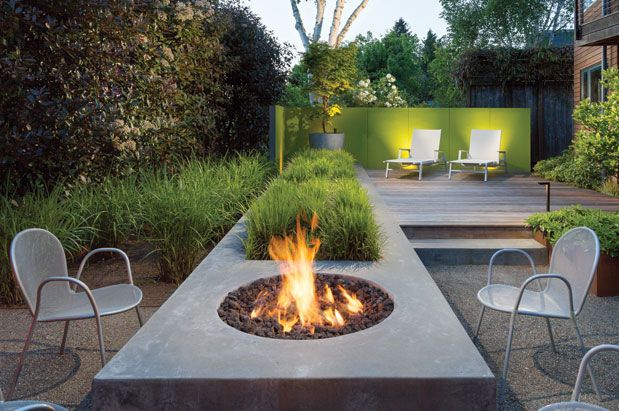 After Jay and Katharine Petersen, an electrical engineer and a marketing consultant, respectively, finished building their contemporary-modern home on Phinney Ridge in 2013, they wanted to tackle the surrounding mismatched patches of yard—including a sloping, lumpy lawn.

The couple brought in Seattle-based landscape designer Scot Eckley to help transform the hodgepodge into a reason to go outside. “Everybody wants to build and maximize their house for indoor living, and we all end up with small and disjointed spaces outdoors,” Eckley says. People inherit decisions made decades earlier. “The impetus for this garden was creating usable outdoor living space.”

The result is a house surrounded by distinct vignettes, including several decks—one facing east for sunrise, another on the south side for barbecuing and one facing west with views of Puget Sound and the Olympic Mountains. And in the private backyard, a lounging deck includes a multipurpose planter punctuated by a fire pit. 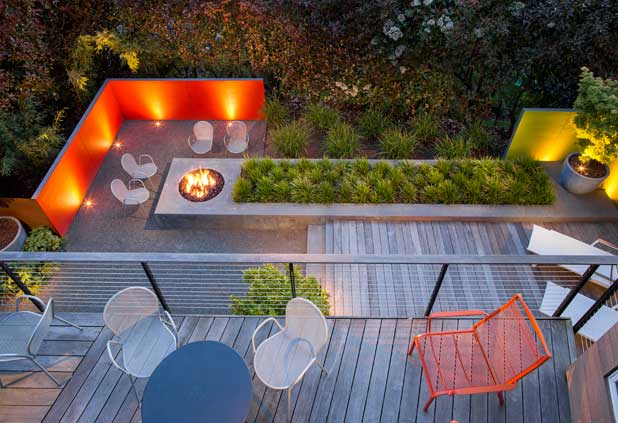 Strikingly modern, the round fire pit (which burns natural gas) is a sort of dot at the bottom of an exclamation point formed by the long, rectangular planter. Made of concrete, with low grasses running down the center, the planter provides impromptu seating for gatherings. In a neat eco-trick, the planter is also a bioretention system—a type of rain garden that allows water to soak into the soil rather than running off. “That feature has a lot of life to it.” Eckley says. “It’s a really beautiful element, even when the fire feature is turned off.”

Eckley and the Petersens thought about how the backyard space would look when viewed from the second or third story of the house, too. Hardscape elements (concrete, mild steel and cement board panels) create bold lines, while plantings provide the softer side of geometry with repeated patterns of grasses such as liriope, miscanthus and bamboo. Potted Japanese and paper bark maples stand as taller, leafier focal points. Eckley says, “We wanted the stage to read very graphically.”