A Vacation Home in Lynden is Filled with Memories 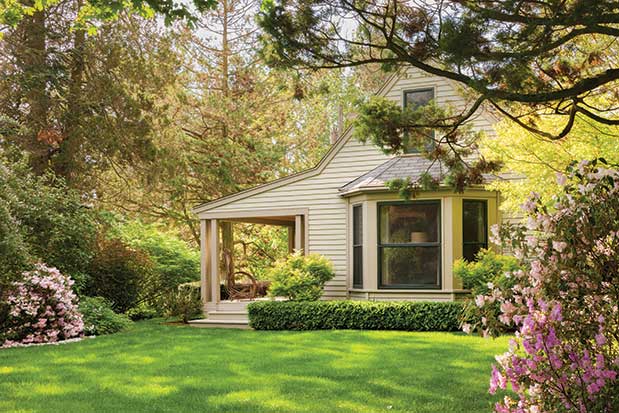 Rows of raspberry canes, their curling tendrils climbing up posts—the result of countless seasons of planting and picking—line the quarter-mile drive up to Estergreen, the 19th-century cabin owned by Vancouver, British Columbia, architect Robert Lemon. The bittersweet berry is a fitting symbol for Lemon’s current state of mind.

This summer, he’s embarking on a poignant project: selling the Lynden vacation home he shared with his late partner, designer Robert Ledingham, for more than 30 years.

“We would come every weekend. It was our escape from the city,” Lemon says of the 5-acre property in northern Washington, just minutes from the Canadian border. “Bob died three years ago, and it has become quite a different experience to come here alone.” Last September, Lemon decided to put Estergreen on the market, hoping someone else might find the same kind of enjoyment in the retreat that he and his partner experienced.

Ledingham purchased the house in 1981 just one month before meeting Lemon. After the couple got together, they began the decades-long process of renovating it. “It was quite ugly,” Lemon says of the 1,800-square-foot house. “But the setting was what was so appealing.” The private plot is bordered by a lake, looks out over neighboring fields of hazelnut trees and blackberry bushes, and offers distant views of Mount Baker. “We called it ‘The Farm’ because the property used to encompass about 100 acres of farmland. It’s now been subdivided down, resulting in our little, 5-acre parcel.”

Bay windows in the dining room of Estergreen, the Whatcom County cabin owned by Vancouver architect Robert Lemon, look out to a wisteria-draped pergola in full bloom in the summer.

Lemon and Ledingham set out to overhaul the house, ultimately completing three renovations over the course of their three-decade tenure, including a major kitchen expansion, a master suite upgrade, an extension of the formal dining room, a small second bathroom, and a significant landscape redesign that created the pastoral and terraced gardens surrounding the property. During the first of these updates, when they began demolishing the dry wall in the master bedroom, they uncovered original cedar logs and ceiling beams, revealing a surprise about the house’s history. “The logs had been stuffed with a Swedish-language newspaper dated from 1887,” Lemon says. “From there we were able to research the original family who owned the house, and it turns out they were Swedish pioneers named the Estergreens who came up here from Seattle.” Thus, the home’s name.

Weekends at Estergreen included bike riding through Whatcom County, and cooking for and entertaining friends. “On a typical Saturday morning, we would come down here… I’d cut the grass, which would take about three hours, riding the lawn mower and all of that. Bob would iron the tablecloths and vacuum, and then we’d have a lovely martini together before dinner.” The meal would often feature vegetables and herbs from Lemon’s garden.

Views of the neighboring farm’s raspberry canes from one of the house’s outdoor decks.

Inside, the house is a curated combination of the couple’s design sensibilities incorporating elements of Asian, Scandinavian and Canadian culture. A Japanese step cabinet staircase leads to the home’s second floor, where the guest bathroom is concealed with shoji screens, both nods to Ledingham’s signature modern style. In the living room, an ornate Turkish rug from Lemon’s travels to Istanbul covers the larch floor. “We didn’t set out to design the house in a specific way,” Lemon says. “We kept adding layers and it just evolved.”

As Lemon readies the house for its next evolution and owner, he says there is much about Estergreen that will remain with him. “I have 34 years of history here,” he says. “That’s a lot of memories.”

An early renovation of the master bedroom revealed the house’s original cedar logs and ceiling beams dating back to the 1800s.

Part of the winding, quarter mile drive up to the house

The kitchen features an eccletic mix of design elements including Turkish rugs, a stainless steel countertop leftover from one of Ledingham’s Vancouver projects and Ikea cabinets