This Wallingford Kitchen Remodel Lets the Sun Shine In

The homeowners wanted each of the rooms to feel distinct yet also allow people, light and sound to move more fluidly through from the front of the house to the back 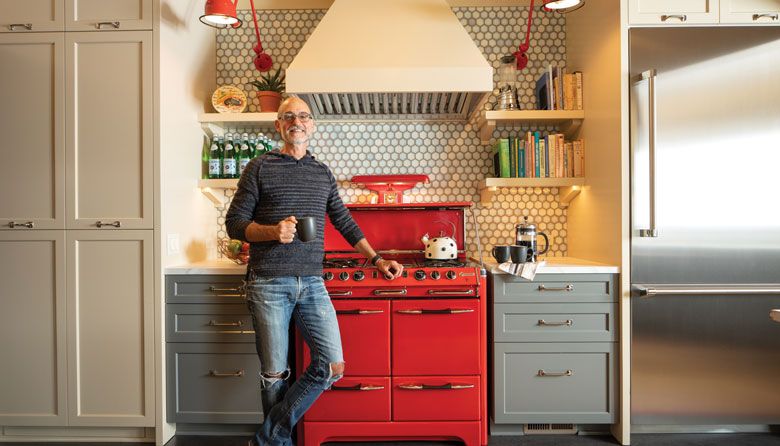 Light and space are limited resources for many Seattle urban dwellers, but Walt Mason and his husband, Sam, had their hearts set on both.

Tucked into a corner lot on a charming street in Seattle’s Wallingford neighborhood, the 1911 Craftsman bungalow the couple purchased in 2005 was, by 2016, due for an update. Armed with ideas from websites like Houzz.com, the couple hired architect Nazim Nice of Motionspace Architecture and Design to help them tackle a number of remodel projects throughout their one-story, 1,604-square-foot home.

Although Nice did some work on the home’s entry and in the finished basement, he focused his efforts on the living and dining areas, and a poorly lit, somewhat isolated kitchen that was in particular need of attention. The homeowners wanted each of the rooms to feel distinct yet also allow people, light and sound to move more fluidly through from the front of the house to the back. COLOR PLAY: Design and color consultant Emily Lauderback coordinated the palette in the kitchen around the red stove, updating the room while maintaining its charming vintage vibe

To open up the previously cramped and closed off kitchen, Nice removed a wall that partitioned it off from the dining room. He also added 21 square feet off the north wall to square up the back of the kitchen.

In lieu of an island, which would have taken up too much space in the middle of the narrow kitchen, Nice opted instead for peninsulas on either end. At the back of the kitchen, the Neolith counter creates an indoor/outdoor space by extending out into a back deck with the help of Nanawall SL60, a sliding/folding aluminum and glass door system that Mason says “opens easily, closes and latches securely, locks tightly, and when it’s closed, is solid and draft-free” even in the wet Seattle winters. OLD TO NEW: Old cabinetry was from two different eras, so new ones were essential Other details, including custom cabinetry, a farmhouse sink, lighting made from glass telegraph insulators and a restored 1940s-era O’Keefe & Merritt stove, help preserve vintage charm while adding the convenience and functionality of a modern kitchen.

“The kitchen remodel has changed the look and feel of our entire home,” Mason says. And even though only minimal square footage was added, “The house feels double in size. And we have all this natural light and a connection to the outdoors that we absolutely love.”