A West Seattle Waterfront Home Brings the Outdoors In

A new West Seattle house embraces the sights—and the Sound 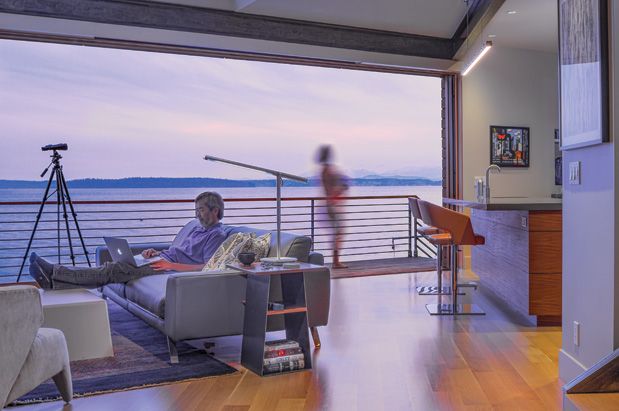 !–paging_filter–pYou know that you’re in prime waterfront country when otter invasion is a common event.brbr“Living on the water is something that you really can’t plan for or know what to expect,” says the homeowner Leslie with a laugh. “At high tide, we have an otter that’s coming up and ruining our landscaping.” Along with some exciting wildlife, she and husband Albert’s piece of property on West Seattle’s southwest tip also has some stellar views. After the couple got off to a false start with another designer, their highly prized general contractor recommended an architect who not only gave them a new three-story house with the briskly modern aesthetic they desired, but also a design that wrung every stunning drop from their Puget Sound panorama.brimg src=”/sites/default/files/newfiles/0714_shelter_aia2.jpg” style=”vertical-align: middle;” height=”398″ width=”600″brbremPhoto: The main level’s deck hits the house’s 25-foot minimum setback to the inch/embrbrThat new architect, Stan Hanson, suggested several view-maximizing measures starting at the ground level. After removing the original low-lying bungalow, he had the site regraded in order to raise the new house by 3 feet. “We wanted to bring everything up, so you felt like you were more on the water, instead of depressed down below,” Hanson explains. The house itself takes the sly shape of a trapezoid, enabling every permissible inch to be put to good use. Says Hanson, “This house is pushed out to all the limits on all sides.” (Even the choice of a curving barrel roof on the front side had a height-grabbing motive.) The architect compensated for the lot’s limited width (neighboring houses are cheek by jowl) by using its depth instead to contain two “volumes” that emphasize the views. The volume containing low-priority spaces, such as the media room, master closets and garage, face the street, while the volume holding high-priority rooms, such as the kitchen and living room, face the water. “The heart of the house is right up front on the view,” Hanson says. “The main active spaces to me always want the best spots, the best view, the best light. So it made sense that we’d have more of a family kitchen right up front, and the bedrooms are stacked, top to bottom, for the views.”/p
hr
pstrongTo see more photos of this home, view the a href=”http://www.seattlemag.com/gallery/slide-show-west-seattle-waterfront-hom…” target=”_blank”slide show here/a./strong/p
hr
pThe kitchen island’s prominence of place was prompted by the homeowners. “We spend most of our time on the island,” Albert says. “One of our favorite things to do when we go to a restaurant is to sit at the counter, or bar, and have a dinner and a drink,” Leslie explains. “That’s something just in our dating that we enjoyed, and we wanted that in our home as well.” brbrimg src=”/sites/default/files/newfiles/0714_shelter_aia3.jpg” style=”vertical-align: middle; margin: 10px;” height=”398″ width=”600″bremThe third-floor master bedroom features a clever sound-proofing and privacy-ensuring internal bifolding NanaWall window, which overlooks the main floor, and a custom bed designed by Seattle’s Chadhaus/embrbrThe waterfront volume also boasts a two-story-high open configuration (Albert’s special request), which brings natural light pouring through double-decker windows and into the living room and kitchen below. Immense lift-and-slide pocket doors open these main rooms to the elements and to a long steel deck, which leads down to a landscaped patio, where a modern linear fireplace and concrete bench beckon, as does the Sound just 25 yards away. “We wanted it to be very indoor-outdoor friendly and to create a little space for sitting right on the water’s edge,” says Hanson of the patio plan. “In the summer, we bring chairs out,” Albert says, “and it’s really an idyllic place to spend the evening and watch the sun go down.” nbsp;brbrimg src=”/sites/default/files/newfiles/0714_shelter_aia4.jpg” style=”vertical-align: middle; margin: 10px;” height=”450″ width=”300″bremAside from the rooting of an occasional foraging sea mammal, the landscape is designed to be very low maintenance (an otter-blocking gate is in the works). A concrete linear gas fireplace ensures a year-round toasty spot for water watching, and is a nexus for entertaining. /embrbrBeyond its pleasing vistas, the house, completed last July, has a more personal hold on its owners. Albert proposed to Leslie on the site, in mid-construction and, before the house was finished, the couple’s nuptials took place on their view-blessed third floor. brbr“Building a house was actually a big factor in my decision to ask her to marry me,” Albert explains. “Because, basically, working on something together that was for our future just cemented the relationship.”brbrTheir architect says he’s not sure he gets any credit, but “it makes a good story.” brbrThis home was selected by a panel of architects for the AIA Seattle Home of Distinction program (a href=”http://www.aiaseattle.org” target=”_blank”aiaseattle.org/a) in recognition of its unique method of integrating indoor and outdoor spaces. brimg src=”/sites/default/files/newfiles/0714_shelter_aia5.jpg” style=”vertical-align: middle; margin: 10px;” height=”525″ width=”350″bremFireplace, planters and dingy in detail./embrbrstrongArchitect:/strong Stan Hanson, principal architect; Sophie Hong, project architect; Stillwell Hanson Architects (Queen Anne, 46 Etruria St., Suite 200; 206.297.1504; a href=”http://www.stillwellhansonarchitects.com” target=”_blank”stillwellhansonarchitects.com/a).strong General contractor: /strongJoseph McKinstry, Joseph McKinstry Construction Company (Mount Baker, 3304 Beacon Ave. S; 206.723.4651;a href=”http://www.jmcc.com” target=”_blank” jmcc.com/a). strongLandscape architect: /strongD.M. Ohashi (Preston, 30385 SE High Point Way; ohashilandscape.com). Lift-and-slide pocket doors (main floor to deck): Kolbe Kolbe Millwork (715.842.5666; a href=”http://www.kolbe-kolbe.com” target=”_blank”kolbe-kolbe.com/a). strongCustom steel fabrication (front door, stairwell, deck railings, wine staircase): /strongCraig Thielen, Railings by Craig (Tacoma; 253.307.3136;a href=”http://www.railingsbycraig.com” target=”_blank” railingsbycraig.com/a). strongKitchen cabinetry/island: /strongCornerstone Fine Woodworking (Woodinville, 5809 238th St. SE; No. 4; 425.483.7083; a href=”http://www.cfwi.net” target=”_blank”cfwi.net/a). strongOutdoor gas fireplace:/strong Robata linear concrete fireplace, Paloform (888.823.8883; a href=”http://www.paloform.com” target=”_blank”paloform.com/a).brbr/p