Seattle’s community of artists and innovators inspire us through the projects they design, the art they create and the food they cook. We asked six of the city’s influential creators to answer this question: “Where do you go to seek the inspiration to do what you do?” The answers might surprise you… “When Kirk did this building in the 1960s, he was strongly influenced by Japanese architecture and the Northwest connection to nature. All of those elements are part of this building. It’s not an exact copy of a Japanese teahouse, rather a reinterpretation through Kirk’s eyes, and that’s why I love it.”

Principal architect and founder of Belltown firm Suyama Peterson Deguchi, Suyama has received the AIA/Seattle Medal of Honor and is a member of the American Institute of Architects’ College of Fellows

Photographed at the Guest House in the Japanese Garden at the Bloedel Reserve on Bainbridge Island, designed by late Pacific Northwest modernist architect Paul Hayden Kirk

“The guest house is all about how a building can sit within nature and let nature be the dominant force. The first impression of being there is all about the strength of the natural environment, and that is really what I rely on when I go to a new project. I try to understand the natural surroundings first and from that, design architecture for the place.… There’s a wonderful sense of prospect and refuge in that house. It’s a very primal thing.” “I’ve covered the walls in art that I’ve collected for years—some from friends and some pieces from galleries like Roq La Rue in Pioneer Square. And, of course, there’s a bit of taxidermy as well,” Derschang says of her signature element.

“When I design a restaurant, the goal is to create a place I’d like to go to. Really, it’s as simple as that.… So I wanted my den to be a little nook to curl up in. My style is eclectic and varies from space to space, but I’m not crazy about spaces that feel too designed and polished. I also think every space needs something ugly, kitschy or a piece that seems like it doesn’t belong, to give it a bit of personality.” 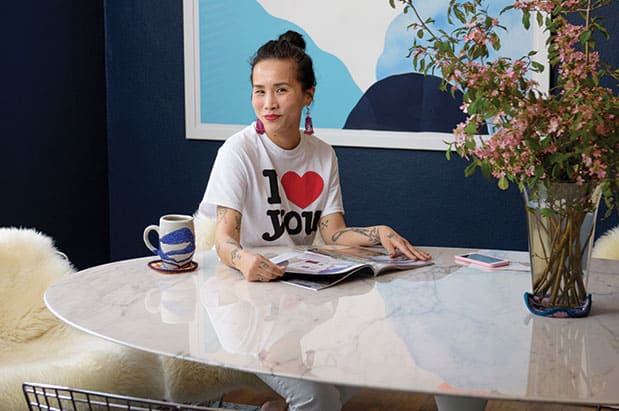 “Navy blue is my favorite color. I knew first and foremost I would start with navy, and then everything else in the house would incorporate different shades of blue…I remember my mom was like ‘Absolutely not! You can’t do that!’ And then the painter got here and was like ‘No.’ And then my broker said no. Everybody said no, but after it was done, they all seem to really like it.”

“When I bought the house a year and a half ago, I knew that this space was really going to be the central point. It’s kind of like my great room: It’s my office, where I hang out, where I have my breakfast…it’s where everything happens. But it’s also a place that’s really quiet. When it’s just me and I get to be at home by myself…it’s such a recharge.” “I grew up spending my summers at Spee-Bi-Dah, a beach community on the Tulalip Tribe reservation. We were able to watch the Tulalip people fish from the shore, help pull in the nets, and they would generously let us take the smaller fish that we could carry home. It was a truly special experience.”

Photographed at the Puget Sound shoreline at Carkeek Park in Broadview with her dog, Mr. Arlo

“I am not a woods or mountain girl. I like the water. My cooking is very much inspired by the seafood from the Salish Sea. The water is the place I go to quiet my mind, slow down and think about things simply. With the giant sea stretched out in front of you, it’s a powerful place. It’s the place in the Pacific Northwest that I feel the most at home. ” “I had lived in the area in the mid-’70s, and it’s always been this magic and fertile place,” Klein says. “With the big view, you can see a long way before your eyes hit anything, and that sense of expansiveness offers a freedom to explore. It allows me to dream and then act.”

Visual artist (Klein) and industrial artist (Niemi) whose respective public art works have been installed all over the world. These include locally celebrated pieces, such as Klein’s “Columnseum,” painted circles under the Roosevelt Park and Ride, and Niemi’s “Fish Bridge” installation, made of stainless steel, aluminum and recycled wood, which was displayed at several sites from the University of Washington to Alki Beach, and now is at the La Conner waterfront

“I love the openness of the landscape,” Niemi says. “The neighboring farmers keep the fields clear of trees and shrubs, so even on a dark, cloudy day, there is lots of light and space…. My work is seldom about eagles and crops and cows, but the natural environment helps put me in a place where I can think more clearly about whatever it is I am working on.”