Winemaker Charles Smith’s Leschi Home Is One For the Ages

Scandinavian influence makes its way through this home on Lake Washington 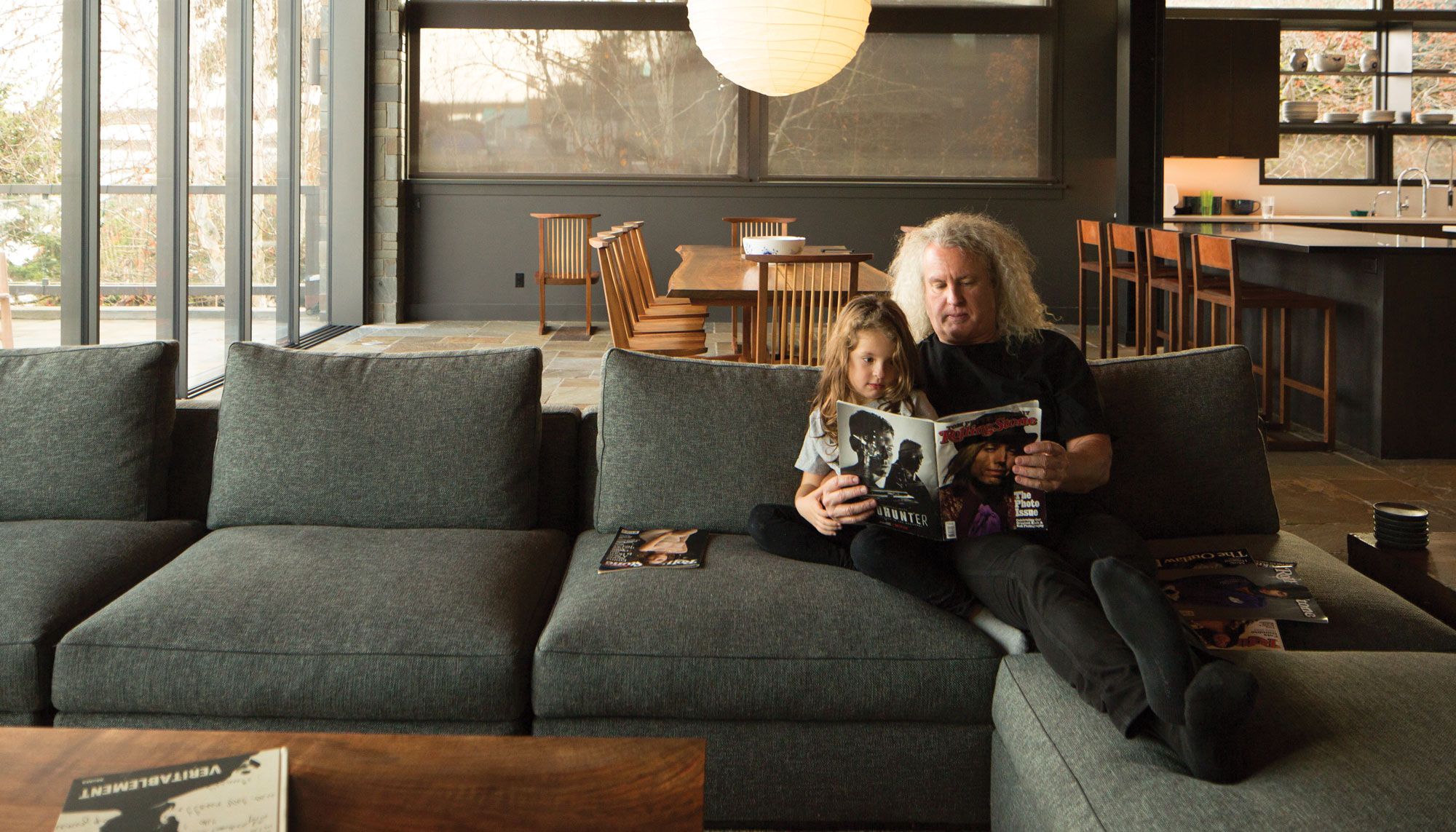 Less known is how his years in Scandinavia inform the way he lives today. In his Leschi waterfront house, which he’s called home since 2016, comfort spills from rooms furnished in a lush minimalist style, light flickers from fireplaces in almost every room, and, he assures, a meal wouldn’t be served at the expansive dining table (designed by George Nakashima and built by his daughter, Mira) if not bathed in candlelight. Call it hygge—the Danish buzzword for cozy—Charles Smith style. Photographs by Alex Crook. From left: Expansive floor-to-ceiling windows dominate the lakeside view of the house; A comfortable chair next to the living room fireplace invites lingering; Wood warms up the master bath where this tub boasts one of the best views in the house

The 6,600-square-foot, three-level traditional stone and wood house, originally built in the 1940s and remodeled in 2001, wasn’t Smith’s first choice. He had owned a mid-century modern home in Seward Park, originally designed by Paul Hayden Kirk and remodeled for him by Seattle architect Tom Kundig of Olson Kundig (who also designed Smith’s tasting rooms). Smith loved that house, but it wasn’t working in one important way. He has a young daughter, Charlotte, now 5, and having his bedroom and hers on different levels in that house was a distance too far to bridge. Hence, their move to a house where the master bedroom is located just steps from Charlotte’s room.

“There were two ways to go,” he says of his relocation. “One was to go to Queen Anne, with its views and the neighborhood; the other was to be on the water.” He chose the latter. “It’s the ultimate Seattle living. So much about us is the water; water is part of our culture.” And water is very much a part of the house. Smith again engaged Kundig to help with renovations, many of which were designed to better connect indoors and outdoors, provide a sense of coziness to interior spaces, improve sightlines to the lake and create a sense of transparency between rooms. “That sense of transparency is Charles’ sense of how he wants to live with his family,” Kundig says. “Everybody is aware of where everyone else is in the home, except, of course, in private rooms like bedrooms.”

It’s hard to imagine a Seattle house with too much light, but Smith says that was the case with his dining area, which underwent significant changes. It had a glass ceiling as well as white accordion doors opening to an upper deck overlooking Lake Washington. The glass ceiling, he says, left the room unanchored and vast. Meanwhile, the doors distracted from the view.

The area now has a high, dark ceiling, creating intimacy, and an unfettered water view achieved by replacing the accordion doors with a fine-lined, framed sliding door system. It’s part of the main living floor’s great room, which also includes a restaurant-worthy kitchen (Smith says he cooks every day), islands that divide the space visually from the dining room without separating the two, and a large living room furnished with an inviting sectional and fireplace.

A wall that closed off an office located behind the living area was also changed; the space remains separate (and is no longer used as an office), but is better connected now to the main living area. The change is emblematic of what Kundig says the house needed—in his words, a “better sense of connectivity.” Photographs by Alex Crook. Clockwise from top: Smith and Charlotte enjoy cooking together in the kitchen which has two islands; the one in the foreground serves as a visual divider between kitchen and dining room; this painting of Smith and Charlotte is by Helene Wilder; a large-screen dominates a downstairs room with a lake view;  the winemaker’s wine cellar

Smith agrees: “The idea is to make cozy spaces where you have a big space,” again referencing the Danish influence. “The vastness of this house,” he adds, “was the least appealing thing about it. I wanted to eliminate the vastness without closing off spaces.”

Downstairs—which also contains a wine cellar and a guest room—is a surprise: In a family room, where he and Charlotte sometimes watch movies, is a seemingly impenetrable dark wall that unexpectedly opens when pushed on. “You wouldn’t know those rooms are there,” says Smith of the bedroom and workout room behind the wall. Creating the wall—which replaced white sliding doors—was his idea. “The same wood is used in panels upstairs and in the kitchen, and all the way through,” he says, which helps to tie the home together.

The master bedroom, on the top floor, remains relatively untouched, although Smith plans to replace the current windows, whose design mars the view. Big changes, though, occurred in the master bath, where wood has been added to a wall, bringing warmth, and a freestanding soaking tub has one of the best views in the house.

Reflecting on his home, Smith admits that he sometimes thinks it’s too big, too much. With its location on the water, it will always hold its value, he says. But beyond that, the house represents something else. “It’s about the hope of filling the house with love and family in the future. It’s a space I can grow into.”