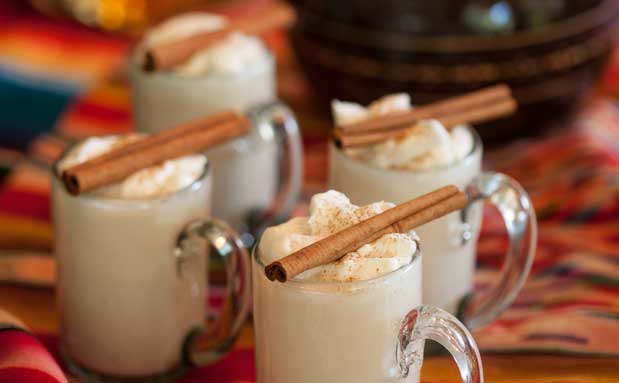 (*see Horchico, below, for kids’ version)

In a blender or food processor, grind the rice and cinnamon sticks until the mixture becomes the consistency of course sand. It’s OK if the cinnamon sticks simply break up. Pour the rice into a large bowl and cover with 8 cups of room-temperature water. Cover and let sit for at least 6 hours or overnight, stirring once or twice if possible. Now pour the rice water through a fine mesh sieve or double layer of cheesecloth. Discard the rice and cinnamon sticks. Add evaporated milk, 1 cup sugar and ground cinnamon to the rice water and whisk ingredients together. Refrigerate until you are ready to heat and serve (keeps up to 3 days). Heat until just hot, remove from heat and add the 1 1/2 cups tequila. Beat whipped cream with 1 tablespoon of sugar until soft peaks form, whisk in 2 tablespoons of tequila (optional). Serve in mugs and top with a dollop of tequila whipped cream, a cinnamon stick and a sprinkle of cinnamon.

*Horichico for the niños, omit the tequila and serve warm in mugs topped with fresh cinnamon whipped cream: Simply add a 1/4 teaspoon cinnamon and 1 tablespoon sugar to 1 pint of whipping cream and beat until soft peaks form.

Go back to Entertaining: A Day of the Dead-Themed Fiesta