Langdon Cook goes apicking for the tart and tangy huck. 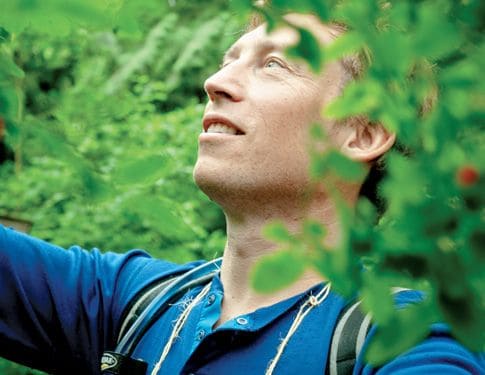 It’s time for a trip to the local confectionary, but be warned: This isn’t a jaunt down to the corner candy store. It’s nature’s candy store! Let’s go over the checklist. Hiking boots? Check. Map and compass? Check? Bucket? Check. Bear spray…

We’re heading to the mountains to pick one of my favorite seasonal treats. It goes by many names: whortleberry, bilberry, hurtleberry, grouseberry, fraughan. On the East Coast, it’s called a blueberry. Out here, we mostly use the term huckleberry—and despite what you may have heard, there’s a difference.

Though common names can be tricky, in general, the difference between blueberries and huckleberries is one of geography, flavor and seeds. Huckleberries are predominantly western, they have a more pronounced tartness, and their seeds are bigger. Did I mention that huckleberries blow away the blueberry competition? Call me biased, but the wild huck combines the best of sweet and tart in a tug-of-war that’s the ideal for any baker of pies.

In our region, we’re graced with an abundance of justly famous huckleberry patches, and no matter where you live, there’s pickin’ near you. The Olympic High Divide offers the hiker heart-stopping views and good huckleberry picking, but simply driving over any of the Cascade Mountain passes puts you in striking distance of a productive patch. Me, I usually hop on I-90 to Stampede Pass. It’s a relatively easy two-mile walk to my patch, which might strike some huckleberry pickers as a foolish exertion, but I like to hike, and along the way I’m looking for mushrooms, too. The map and compass ensure that I won’t get lost roaming the patch while filling my bucket.

Here’s another tip: When you get home, spread your berries in a single layer on a baking sheet and place in the freezer for an hour or two before scraping into a large Ziploc bag. This allows the berries to be taken out of the deep freeze at any time and measured by that most important means—the handful—to blend in a smoothie, top a bowl of oatmeal, or simply pop in your mouth one by one.