On the Hunt for Morels 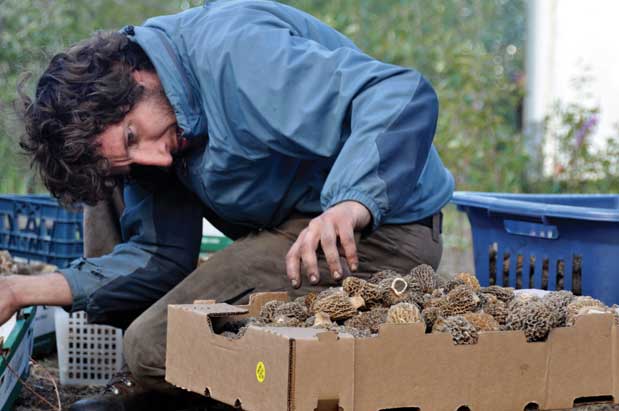 Jeremy Faber bangs on my door a little after 5 a.m. at the end of May, on a day that promises temperatures in the 70s. “Bring a down jacket,” he advises. Thin and lanky, he possesses a barely contained intensity that seems ready to spring at any moment. As I gather up my stuff, Faber taps his foot impatiently. Mushrooms don’t sleep! As far as I can tell, neither does he.

We get into Faber’s white Prius, hardly the stuff of an exploratory expedition deep into the heart of the North Cascades in search of the season’s big moneymaker, morel mushrooms. The car, it turns out, is a rental. Normally, Faber drives the rough logging roads in a four-wheel-drive Chevy Astro van, but he’s figured out that a car that gets 50 mpg on the highway and costs $30 a day to rent is a more economical way to scout for elusive ingredients in far-flung corners of the Pacific Northwest. “Plus, it’s incognito,” he says, grinning. No one in the competitive world of commercial mushroom picking will suspect that this vehicle—the choice of speed-limit-abiding drivers from Rainier Beach to Ballard—is being captained by the city’s preferred purveyor of foraged foods.

Faber, 38, is Seattle’s ticket to wild produce. Since 2001, his business, Foraged and Found Edibles, has provided local restaurants (and now, via expansion, New York City eateries) with nature’s fickle bounty: huckleberries, fiddleheads, fungi and a host of other ingredients that grow only in the wild. Such edibles require skill to find—and no small amount of calories to haul out of the woods. Organic by definition and more nutritious than their domesticated counterparts, wild foods are increasingly in demand across the country. To keep up with this demand, Faber scouts the backcountry relentlessly and cultivates a network of itinerant pickers scattered across the region to help him. As we head east, Faber’s BlackBerry buzzes continuously with messages from Seattle restaurants: Poppy, Matt’s in the Market, Sutra and so on. Orders come in for stinging nettles and elderflower, for porcini and sea beans. When he’s not on the phone, we talk about hockey playoffs, the Mercer mess, the mayoral race—anything but mushrooms, the procuring and selling of which will consume most of his time in coming weeks. Today’s route takes us over Snoqualmie Pass to Table Mountain, northeast of Cle Elum, where, during the previous September, a volley of lightning strikes ignited a forest fire that burned nearly 43,000 acres east of Blewett Pass. Such fires, a natural part of the ecology of the western mountains, are known to produce large flushes of the chefs’ favorite fungus, morel mushrooms. Nomadic pickers are camped all over the outskirts of the burn, hoping to cash in, but Faber wants to find a patch of virgin ground where he can work in seclusion. An hour-long bushwhack takes us down steep fields of scree to a wooded canyon burned in the fire. Faber’s hunch—that this burn isn’t panning out as hoped—is confirmed by a dearth of morels. On to plan B. We clamber back up the slope and make tracks for Ukiah, another four hours away in the Blue Mountains of northeastern Oregon. When he can’t pick himself, Faber needs to buy from others, sometimes hours away.

Ukiah, population around 200, is a sleepy burg in ranch country most of the year; come May, it’s a stop on the “mushroom trail” for the pickers and buyers who follow this largely hidden trade route. For the past several years, I have been on and off the mushroom trail, from northern California to the Yukon, writing about the pickers and buyers in this colorful yet mostly unknown industry. Many of them are first-generation immigrants, predominantly refugees from the wars in Southeast Asia who are comfortable bushwhacking deep into strange woods in search of food, with a smattering of Latinos in between agricultural seasons. Faber knows a field buyer named George (not his real name) who’s staying next to the Ukiah general store in a dilapidated doublewide (“finest little motel in town, bar none,” says the peeling paint out front) for the two or three weeks that this region will produce morels. Each evening, starting at about 5, pickers pull into the gravel lot in their pickups and conversion vans to sell to George, who, in turn, sells to Faber.

Several Southeast Asian men busy themselves with minor tasks, smoking cigarettes and drinking cheap beer. George keeps a small posse on the payroll to help the operation run smoothly. Some stay in the motel, while others camp in tents, and at least one sleeps in his truck. The camp cook is from Thailand. I watch him carefully slice flank steak and tripe to make larb for everyone in his makeshift outdoor kitchen. Two Lao men carry baskets of morels to a refrigerated trailer around back.

A crew of Mexican pickers arrives in a dusty pickup with several buckets of tired-looking morels. Faber recognizes one of the pickers and whispers to me that he’s a drinker; he’s not surprised by the poor quality of the product. George runs his fingers through a few of the mushrooms, shaking his head sadly, realizing he can’t sell such low-quality morels, certainly not to Faber, who has earned his position in the wild food business by selling top quality. These transactions between different ethnicities can be fraught. Faber jumps in to help. “These are driers,” he says to the Mexicans in English. “We only do fresh market. Sell these in La Grande.” Many of the larger buyers are stationed in La Grande, Oregon, right now, buying even old or waterlogged morels to dry for the domestic and European markets. Everyone stands around with their hands in their pockets. It’s not easy turning away pickers with poor product. The men grudgingly carry their baskets back to their truck and leave.

By nightfall, Faber has as many morels as the Prius can hold, about 600 pounds. After pulling on a wool watch cap and down jacket, he cranks up the car’s air conditioning to high for the five-hour drive back to Seattle. The mushrooms need to stay cool. It will be well past midnight before he drops me off, although his day isn’t done. Next, Faber will unload all the mushroom crates into his walk-in cooler, then drive to Seattle-Tacoma International Airport to ship a few hundred pounds to his New York warehouse. After that, it’s back to scouting. The season is just heating up, and he needs to find a patch where he can dig in for the spring, carve out a little camp in the wilderness, and pick as many morels as Seattle and New York can eat. The mushrooms, after all, don’t sleep.