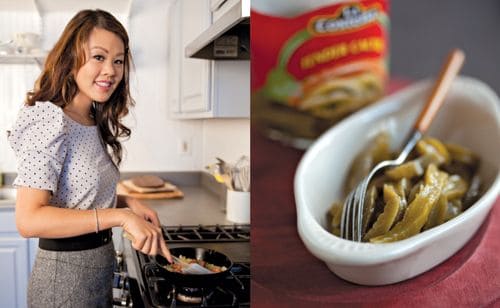 What it is: Prickly pear cactus pads, also known as nopales (singular: nopal), are commonly consumed as a vegetable in Mexico and Central America. The cactus pads—the flat “paddles” that grow from the main stems—are sold both fresh and canned. Their flavor lies somewhere between green beans and green bell peppers, with a slimy texture reminiscent of okra. When the cactus pads are peeled and the spines removed, the vegetable can be used in a simple egg scramble or slivered as a topping for tacos.

How I discovered it: Perusing the brunch menu at Ballard’s Señor Moose, I noticed a chorizo, potato and cactus dish topped with two fried eggs. It was a robustly flavored hash of sorts, and the fresh green flavor of the cactus provided a nice counterpoint.

How to use it in the kitchen: If you chance upon fresh cactus at an ethnic grocery store, trim the edges off the pad, then peel away the outer layer with a vegetable peeler to remove the thorns. If using canned cactus, simply rinse  with water before proceeding. Try substituting cactus in any recipe that might call for green bell peppers. Nopales are fantastic in a quick stir-fry or a side dish with fish, brushed with olive oil and grilled, batter-dipped and deep-fried like french fries, simmered in a beef chili, or in this month’s online recipe—Mexican-inspired cheesy cactus scramble.

kosher salt and pepper to taste

In a skillet, heat the oil on medium-high heat. Add the onion and the sausage, and cook until browned, about 6–7 minutes, stirring occasionally.

Meanwhile, combine the eggs, cactus, tomatoes and jalapeño in a mixing bowl. Beat the eggs and vegetables together. Pour the mixture into the pan with the onions and the sausage, and cook until the eggs are done to your liking.  Season to taste. Remove the pan from the heat and divide the scramble between two plates. Sprinkle with cheese and cilantro, and serve with tortillas.