Knock Out Breakfast Side Dishes

You could easily make a meal out of these tasty sides 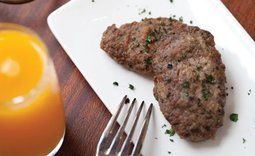 Bacon
Pete’s Egg Nest in Greenwood might be a bit of a dive, and the bacon might not be made from the prized belly of an heirloom pig (though it does come daily from an area farm), but one thing the servers do here is ask how you like your bacon cooked. (Want it extra crisp? Like it chewy?) Have it your way for only $3.95 a side. Want something a little more local? Taste at SAM does a side of crispy Skagit River bacon for $4 at its Sunday brunch.

Potatoes
The garlic-fried potatoes at downtown’s Lola are absolutely perfect—potatoes are slowly roasted with garlic, smashed, seasoned with a generous hand, and fried ($5) so each side is perfectly crusted.

Cinnamon Roll
Locals love the giant cinnamon rolls with walnuts at the Maltby Café ($6.95). This is the place to go if it’s massive cinnamon rolls you’re after: One roll is large enough for four to split.

Breakfast Pastries
Café Besalu in Ballard continues to make the best Danish, croissants and pain au chocolat in town ($2–$5). When in season, the strawberry Danish, with that hint of creamy filling under the fruit, is quite possibly the best single breakfast pastry in Seattle.

Sausage
The house-made pork sausage ($4) at Tilikum Place Café in Belltown is delicately spiced, nicely balanced in terms of meat and fat, and formed by hand into two oblong patties before being browned. Something to be savored.

Hash Browns
The extra-crispy greasy-spoon hash browns at Bay Café in Magnolia, served alongside all of its breakfast items (except the waffles and pancakes), are a clear winner in this category—finely shredded, browned on both sides (integral!), and underseasoned a touch, so you can add as much or as little salt and pepper as you’d like.