Howard Schultz Is Running a Campaign of Contradictions

Knute Berger takes a look at Schultz and his mixed messages 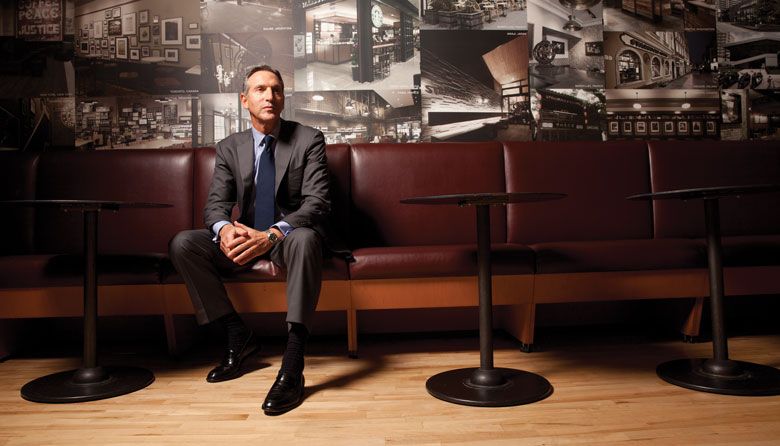 When Howard Schultz brought his quasi-presidential-campaign —cum-book-tour to Seattle’s Moore Theater in late January, there were protesters outside. They consisted of angry SuperSonics fans who will never forgive the former Starbucks boss for letting Seattle’s NBA team leave town, and Democrats afraid that a Schultz independent candidacy in 2020 will divide the anti-Trump vote and ensure the current president’s re-election.

The question was put to Schultz inside the hall: What if your candidacy would split the vote and ensure Trump’s victory? No, Schultz said, he would not play spoiler—a point he emphasized more than once. Defeating Trump is the number one goal. The moderator, Monica Guzman of The Evergrey, pressed Schultz on this question. He wouldn’t run, he said, if it meant a Trump win. But as Guzman pointed out, he has no real control over his effect and wouldn’t specify when or how he would know.

Some argue that his exploratory candidacy is already helping Trump in part by painting the Democrats as being as extreme as the Republicans. Also, if Schultz puts his name on every state ballot, and then withdraws, his presence still might siphon potential Democratic votes, though no one knows for certain. Voting for third-party candidates is often an act of rebellion or a pox-on-both-their-houses act. Schultz’s name could serve as a none-of-the-above haven for voters and could tip the balance in tightly contested states. It could also, potentially, harm down-ticket races that might be buoyed by a strong Democrat at the top of the ticket. The risks seem great for a man who describes himself as having been a “lifelong Democrat,” albeit now a disaffected one.

As Schultz has traveled the country and talked since Seattle, he has moved the goal posts in a significant way. Last week during a visit with The Washington Post he said would reconsider running if a “centrist” were nominated by the Democratic party.

His shift is setting a new bar for the Democrats: nominate a centrist or else, it seemed to say. He’s still insisting that “No one wants Donald Trump fired more than I.” But he’s making a big leap to suggest that the only way to defeat Trump is to nominate a centrist Democrat. What if polls show a strong progressive has a good chance? Plus, the Democratic nominee wouldn’t be known until the summer of 2020. Schultz’s campaign would be well beyond exploratory at that point.

As the Democratic field is shaping up, it looks like it might be a vast smorgasbord ranging from Democratic socialists (like Bernie Sanders) to Republicans-turned-Democrats (like Michael Bloomberg) with tons of progressives—especially women like Kamala Harris, Elizabeth Warren, Amy Klobuchar—in between. The Democrat who does best should be the one with the best chance of beating Trump—left, right or center. At least that’s what many Democrats think. And that person has yet to emerge. Which, is why we have campaigns, right?

It won’t be Schultz in any case. While Schultz deserves credit for commercializing and spreading “third place” coffee hangouts, the third-party route in politics is a much tougher sell. And he has had trouble selling himself already: He has come off as thin-skinned, clueless on race (claiming to be color-blind), bristling at higher marginal tax rates on the wealthy, though he does say he should pay more taxes.

Oh, and his local voting record is poor. Even after being called out for not having voted in most local elections since 2005 Schultz couldn’t be bothered to vote in Seattle’s February school levy election. Records indicate a ballot was sent, but none returned. For all his talk about the importance of community engagement, when it comes to voting in his city of residence, he couldn’t be bothered.

Schultz is effectively running a campaign that appears to be a contradiction: dividing the anti-Trump forces on the eve of battle to defeat Trump, trying to rewrite the rules to suggest only he knows the right answer. It seems to me that for a third party to succeed, it should be created from the ground up, not the top down. The main thing on exhibit so far in the Schultz campaign is his ego.