"Most of our issues are very resolvable through mutual understanding and good governance, or should be." 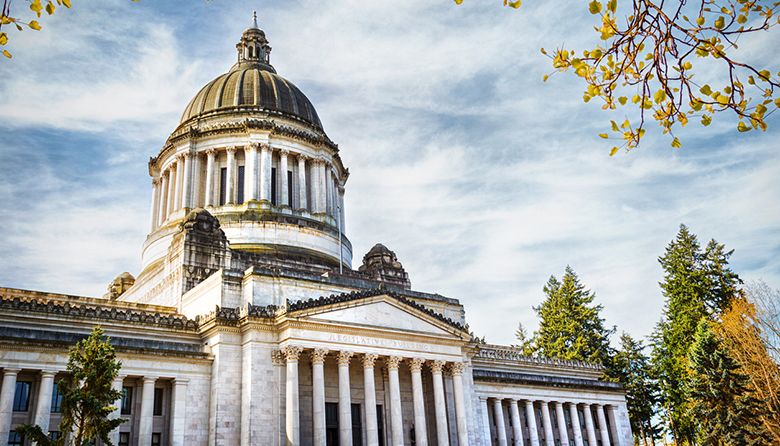 Relations between Western and Eastern Washington are sometimes strained, and this legislative session in Olympia has highlighted some tensions in bills that have been introduced. There’s a kind of tit-for-tat going on. Eastern Washington representatives are asking through bills, “How would you like it if…”

For example, Seattle state senator Reuven Carlyle introduced a bill in January to remove statues of the pioneer missionary and physician Marcus Whitman from the U.S. and state capitol buildings. Whitman is one of two Washingtonians so honored. But Carlyle questions whether honoring Whitman is appropriate given current values. He was on the front lines of colonization, a symbol of “white supremacism” according to the students of Whitman College. Of course, Whitman is a pioneer icon in Washington, with not only a college but also a county named for him. Still, as we rethink the acceptability of totem poles and Confederate statues, Carlyle wants Whitman’s likeness as a symbol of our state reconsidered.

In response, a bill in Olympia was dropped in February calling for the removal of the statue of the communist leader Vladimir Lenin in Fremont. “The legislature finds that under rigorous, objective review Vladimir Lenin does not meet the standards of being one of our state’s top honorees with a statue on display in Seattle.” The wording echoes working in Carlyle’s Whitman bill.

The Lenin statue is a privately owned thing, less hero-worshipping Lenin than a turning of the old Soviet Union era into a kind of quirky Fremont joke. Still, there are people who find the sculpture offensive—I am among them, but if people in Fremont like it, so be it. Nevertheless, Lenin’s figure is not under the state’s purview as the Whitman statues are. But you can see that the legislators, many from Eastern Washington, are making a statement: “How do you like us interfering with you the way you are interfering with us?”

The Whitman and Lenin statues aren’t going anywhere soon as these bills are not passing.

A state legislator from Bainbridge Island has proposed stopping wolf kills and has proposed legislation to prevent the Department of Fish and Wildlife from killing them in Eastern Washington. In response, Rep. Joel Kretz (R-Wauconda) has introduced a bill that would turn Bainbridge Islands into a wolf sanctuary where predatory wolves that kill livestock could be relocated. He told KOMO News, “So this is just kind of an attempt to say, ‘Well, what if it was real? What if they were in your backyard?’” Bay Hay and Feed in Rolling Bay might have to start selling shotguns to chicken farmers, for one thing.

One of the problems of the east-west divide is that not enough people on either side of it spend enough time walking in the others shoes. For some in Eastern Washington, it’s time to take a total walk. While the statue wars have an amusing side, as does the tongue-in-cheek wolf proposal, another legislative threat seems to bet getting more serious. Rep. Matt Shea from Spokane Valley is an advocate of Eastern Washington seceding from the state to form a new 51st state, he calls it Liberty, and has proposed studying this yet again in 2019.

Such proposals go way back and are usually categorized as a kind of quirky cussedness at best. Few have taken splitting the state in two seriously. But Shea is serious. Greg Jayne, opinion page editor of the Vancouver Columbian, writes that “somewhere along the line, this dream from a handful of activists went from harmless and silly to rather menacing and slightly scary.” That’s in part because Shea, its chief proponent, has written a kind of “manifesto” outlining the “Biblical basis for war” which seems to encourage a view of war based on religious ideas involving the extermination of male enemies, justifies assassinations, and approves of killing in God’s name. It’s all a bit like the Taliban. Jayne worries that “the seemingly benign effort at secession has moved to something more nefarious, driven by extremist ideology.”

Dividing Washington through armed action certainly would meet the criteria of “nefarious.” There are groups, particularly of white supremacists, who have long wanted to create a white “homeland” in the Pacific Northwest. Are extremists trying to leverage Washington’s cultural and urban-rural differences into a hostile separatist movement? Most of our issues are very resolvable through mutual understanding and good governance, or should be.

Further division is not the answer, nor is turning the Cascade Curtain into a wall of misunderstanding.