Kohlrabi: The Mystery Vegetable You Need to Eat Now

It's probably a vegetable you've never seen before. Here's how (and where) to eat it. 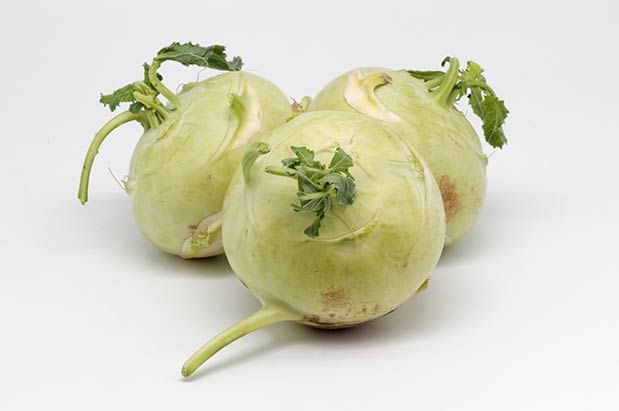 Unless you’ve seen wannabe chefs tackle the challenge of cooking with it on Food Network’s Chopped, or you’re a farmers market connoisseur, you’ve probably never even heard of it.

Kohlrabi, the bulbous plant that comes in white, green and purple varieties and grows above ground, has been known to show up prominently on the menu at several Seattle spots including Juicebox, Cascina Spinasse, Sweetgrass Food Co., Long Provincial Vietnamese, Chop Shop, and Sitka and Spruce, Bar Melusine, among others. You should probably expect it to be a menu’s main dish around the city soon, as Seattle magazine food editor Jessica Yadegaran noted in her recent essay how plant-based foods are “no longer relegated to side-dish status.”

The cabbage-like plant—whose taste resembles a cabbage heart or radish—is not quite as heralded as its trendy vegetable cousins (kale, brussel sprouts), but it can be found during a long portion of the year and its edible leaves, roots and stems make it amazingly versatile.

Kohlrabi is especially abundant in the summer months, so it’s the perfect time to add the vegetable to your kitchen repertoire in soups, slaws, salads and even noodles. Here’s how to make the most of the enigmatic vegetable.

Follow in the footsteps of Seattle culinary fame by copying chef Renee Erickson’s recipe for Celery, Kohlrabi, Apple and Walnut Salad. Or, whip up local blogger Sasha Swerdloff’s (she of Tending the Table) Kohlrabi, Cabbage and Apple Slaw.

Experiment with it as chips, in fritters, or home fries. Want to highlight it in something fancy? Try a kohlrabi ceviche, vegan schnitzel or crostini. Stuff it with spiced goat. As if that weren’t enough, you can also eat the vegetable pickled, creamed, as a purée, as pie or gratin, in spring rolls or curry, or in soup or risotto.

Move on over, kale.