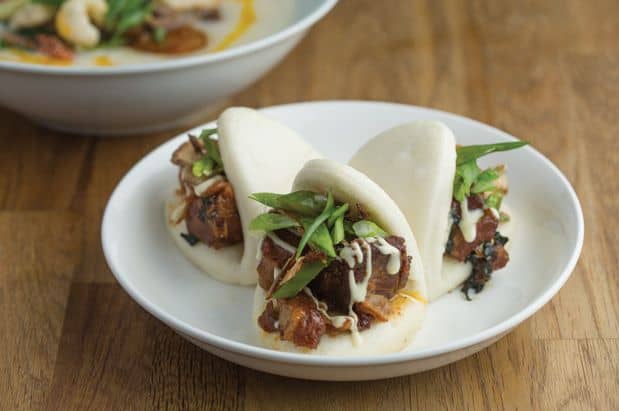 After securing funding on Restaurant Startup, a CNBC reality show, chefs Garrett Doherty and Shane Robinson were able to create a permanent home for their 2-year-old pop-up concept, Kraken Congee, in early spring. The chefs took over a basement space in Pioneer Square from the owners of Little Uncle, and the hidden place has “best-kept secret” appeal. Once you do find it, know what to order, because the menu has pitfalls: gummy noodles and overcooked steak in the kare kare beef ($13), and one-note (that note being sweet) soy- and mirin-braised root vegetables dish.On the plus side: You cannot get better pork belly pinch buns (three for $8) in Seattle; soft, savory pork, pillowy dough—and a brilliant sour-tart calamondin aioli, made from the sour citrus fruit often found in Filipino food.

The congee (rice porridge) is quite good: The duck confit version (with a soy-cured egg yolk, $14) is unrepentant in its savoriness; the pork belly adobo congee ($13) is more balanced (that sublime calamondin aioli shows up here again). Doherty and Robinson, who’ve worked various cooking jobs before striking out on their own, revel in their newfound freedom. They’re pushing boundaries. Granted, not all the experiments work—the octopus congee ($13) is intriguing, but the candied squid, seaweed and kimchi elements are not cohesive—the food is completely original, while remaining comfort food at heart. Pioneer Square, 88 Yesler Way; 206.748.9999; krakencongee.com