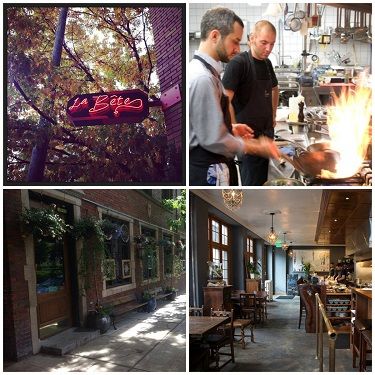 “We hope that you all pay us a visit over the next four weeks to say goodbye, lord knows that I’ll need as good of a send off as possible to make the next phase less of a financial burden,” he wrote on La Bête’s Facebook page Friday, announcing its impending departure.

But Dimitrijevic has other plans for the space. In fact, if he has his way, it’ll reopen in early fall. He is, after all, still paying rent on the space, which doesn’t make money sitting dormant.

“I’ve been thinking about doing it for a long time, like at least a year,” he told me during a break in brunch service yesterday. He’s in overhaul mode for a number of reasons, but mainly because ever since he split with business partner Tyler Moritz (who is now the chef at ZigZag) a couple of years ago, he wants to rebrand it as his own business.

“Just personal preference with the stuff that has to do with that name and imagery and the fact that now it’s 100% mine, I suppose. I think I would have gone a slightly different route anyway the first time around. “Changing it also gives me the opportunity to give it a new personality and a new infrastructure.”

A 30-percent raise in rent a couple of months ago also helped his decision.

He’s going to tweak up the place and do what he thinks will be necessary to save the space and keep it alive. He doesn’t want to release too many details, but says it will be inspired by his love of Spaghetti Westerns and smoked meats. He’s built a huge smoker he’ll be incorporating. “I love that kind of stuff—nice, long-cooked meats and other classic European foods like confit.”

In addition to a regular menu, the new place will have a strong catering option and some retail items. Dimitrijevic  is really into making sodas and shrub-bases. He also wants to made some apple-based cider off-shoots and develop a line of Cryovaced smoked brisket, pulled pork and the like.

He’s hoping a new concept will give the space a fixed identity. “It was never really a French restaurant, although it was somewhat more that way the first year and a half, but it’s never had a fixed identity, which makes it really hard….it’s a lot of f****** work!”

“Some of the things we’re known for aren’t really going to change, like the burger and the pork rinds. If anything, there will be more of a selection of different kinds of burgers.”

Brunch will also stay, although with a different menu. He talks of adding an espresso machine for morning coffee service and some TVs in the vein of Café Presse. “I would have loved to have capitalized on the World Cup!” he says.

As far as interior, there will be a slight shift in the seating arrangement and the addition of some booths. His artistic flair will still be prominent (he built most of the furniture and much of his artwork is hanging on the walls).  “I’m trying to figure out how I could do…something like a basquiat goes to the Old West, showdown with Andy Warhol.”

Almost all of the people in La Bête’s kitchen have shown interest in returning, it’s just a question of when that will happen.