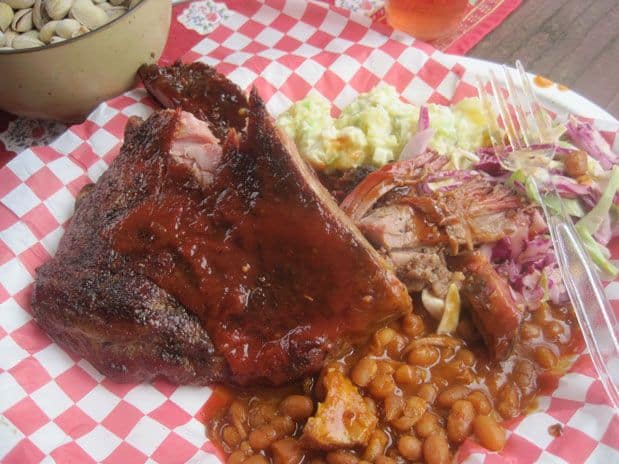 A friend wanted to take her out-of-town significant other out for barbecue in Seattle and asked me to make a rib recommendation. Sorry, no can do. Oh, I’ve tried to find some good bones to gnaw on, but have so far come up empty.

Yes, I realize that makes me sound like a smoked meat snob, but I don’t care. Three years of living in Memphis spoiled me.

So, I did the next best thing and offered to make some ribs for my gal pal and take ‘em over to her place along with a bunch of red wine. While eating those lovely St. Louis-cut super meaty Kurobuta ribs that had been spritzed with vinegar, massaged with bacon-flavored Pig Salt and cooked low-and-slow with hunks of smoldering hickory, our carnivorous crew searched for the perfect match for the smoky meat, blackberry barbecue sauce served on the side.

The 2009 McKinley Springs Cabernet ($24) didn’t wilt alongside those strong flavors on the plate, oh no. Its deep, rich berry and plum character and the wine’s earthy quality screamed: Take another sip! Ah, so smoooooooth!

The grapes that go into this beefy wine are from vines that were planted in the Horse Heaven Hills in the 1980s. Yay, old vines! And, here’s a cool coincidence—only learned this after visiting the winery’s Web site—they do a big barbecue cook-off every year. Next year’s meat-centric showdown is set for June 8.