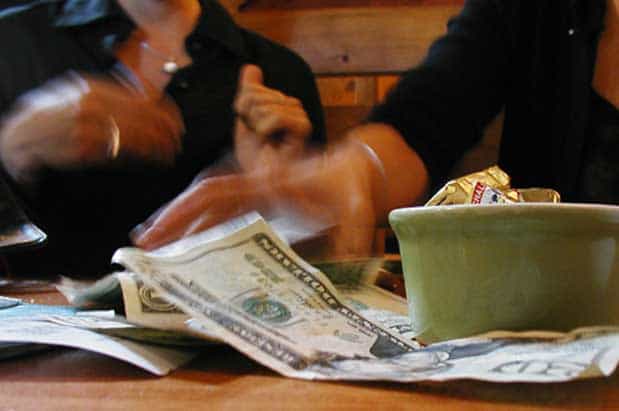 !–paging_filter–pspanWhat if tipping were banned? Sure, let’s get rid of this outdated custom. It’s not like leaving 20 percent at the end of the meal ever truly “ensures proper service.”nbsp;/span/p
pThat was the provocative premise of a a href=”http://www.nytimes.com/2013/09/04/dining/leaving-a-tip-a-custom-in-need-…“front page piece/a in Wednesday’s emNew York Times/em by critic Pete Wells, who wrote, “I could go on against tipping, but let’s leave it at this: it is irrational, outdated, ineffective, confusing, prone to abuse and sometimes discriminatory. The people who take care of us in restaurants deserve a better system, and so do we.”/p
pA handful of high-end restaurants around the country include a service charge on the tab, which is standard practice everywhere in Europe. At The Herbfarm, service (and wine) has always been folded into the price of the experience./p
pSo, why not head that direction? I talked to a few chef/restaurateurs around Seattle and found little enthusiasm for that bold move./p
pa href=”http://chefjasonwilson.com/“Jason Wilson/a said he thinks it would be easier to swallow in a fine dining setting where “you kind of lose yourself in conversation and the experience and hate to be zapped back to reality by having to do math when the bill comes.”/p
pOn the plus side, it would put more dough in the pockets of the employees, but going with a service charge might also scare away diners, he added./p
pThe issue of adding in that extra charge is about as clear as sausage gravy on a biscuit./p
p“If restaurants add a service charge, they’re taxed on that money like it’s income,” said a href=”http://ethanstowellrestaurants.com/“Ethan Stowell/a (of a href=”http://www.seattlemag.com/how-cook-wolf” target=”_blank”How To Cook A Wolf/a, Tavolata and the soon-to-come a href=”http://www.seattlemag.com/ethan-stowell-open-mkt-tangletown-fall” target=”_blank”mkt./a, among others), who is unlikely to jump on board the dump-tipping choo-choo unless there’s broad support for it. “It’s complicated. I’ve been thinking about it for years and still don’t have the answer.”/p
pa href=”http://www.johnhowiesteak.com/“John Howie/a said he’d take a pass on leading the charge to revolutionize the practice of tipping./p
p“It would be one thing if it was a widespread movement, but I don’t see a lot of support for that,” he said. Especially in light of the steady, sometimes dramatic rise in the cost of food. “I’d be fearful of scaring guests away.”/p
pOK, then. What about this? What if diners took the lead in tipping differently? What if we presented a contract to the server when seated, a short document stating that “if” we received stellar service (efficient and informative), the party at the table would agree to leave 20 percent or more? Would negotiating in advance truly ensure proper service?/p
pDiscuss./p